Zogby Interactive has polling detail out in 34 states. 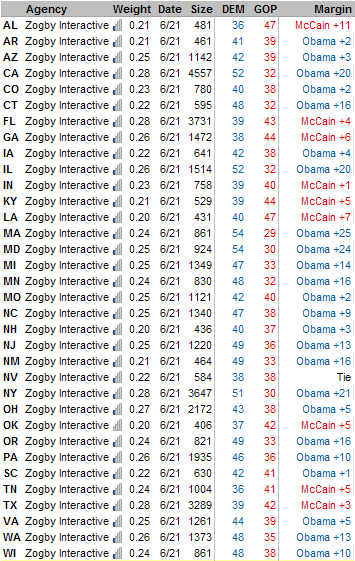 Zogby’s regular polls rate as middle-of-the-pack and get beat up upon a little more than they probably should. His interactive polls, however, are not so good. We give them most skeptical treatment possible by not regressing Zogby Interactive’s results to the mean when computing their pollster rating. But they will be included, weighted approximately one-quarter as much as regular polls. Some of his states have huge sample sizes, but as you can see from the chart above, our ratings have figured out that big sample sizes can’t cover for questionable methodology.

For what it’s worth, I’m actually more sympathetic than you might think to the idea of Internet-based polling. Something like 20 percent of Americans are cellphone-only now, and many others use all sorts of call screening technology that pretty much ensures that they will never be contacted by a pollster. These problems are going to get worse before they get better, and Internet-based polling may eventually need to be part of the solution.

But I don’t know. There are sure are some strange results in here, such as Bob Barr’s numbers being fairly high in many states, as well as Obama’s performance over parts of the South, where Internet usage rates tend to be lower, thereby making a quasi-representative sample more difficult to obtain.