Zion Williamson of the New Orleans Pelicans is not your typical No. 1 overall draft pick.

Sure, Williamson went to Duke, which has produced more No. 1 selections than any other school. Predictably, Williamson was also a one-and-done college player, just like the nine top picks who immediately preceded him. Of course, he was a consensus All-American, just like 24 of the previous 29 collegiate players selected at No. 1 during the NBA’s draft lottery era. Naturally, Williamson also won his conference’s player of the year award, just like 18 of those same 29 players had before him. Unsurprisingly, he scored more than 20 points per game in his final collegiate season, just like 14 of those players. And yes, Williamson also won both the Wooden Award and the Naismith Award, just like nine of those previous No. 1 picks.

None of that makes Williamson unusual. But here’s what does: Of the 66 players to be selected first overall since the advent of the shot clock all the way back in 1954, Williamson was just the sixth who was also a lefty.1

While Williamson was a rarity among No. 1 picks, he actually leads a rookie class that is chock-full of left-handed shooters. His former Duke teammate RJ Barrett, drafted No. 3 overall by the Knicks, is a lefty as well. So is Nic Claxton of the Knicks’ crosstown rival Nets, Thunder rookie Darius Bazley, Heat guard Kendrick Nunn, Grizzlies guard Marko Gudurić, Cavaliers wings Kevin Porter Jr. and Dylan Windler, and two-way rookies Shamorie Ponds of the Raptors and Amir Coffey of the Clippers.

Those first-year players2 are among the 47 left-handers who have taken the floor in at least one NBA game this season — already five more than the number that saw playing time a year ago. When Williamson debuts against the Spurs tonight, he’ll be the 48th southpaw to play in a game this season, more than the number of lefties that have appeared in 32 of the past 34 seasons and only one fewer than the 49 that appeared during the 2002-03 campaign, which represents the high-water mark for this period.3

Despite the fact that left-handers account for approximately 10 percent of the population, they have historically been underrepresented in the NBA. In fact, there have only been seven seasons since 1985-86 in which lefties accounted for at least 10 percent of the NBA population — and none since the 2004-05 campaign. Lefties have accounted for 10 percent of leaguewide playing time even less often, with their share exceeding that figure only six times, and not since 2002-03. 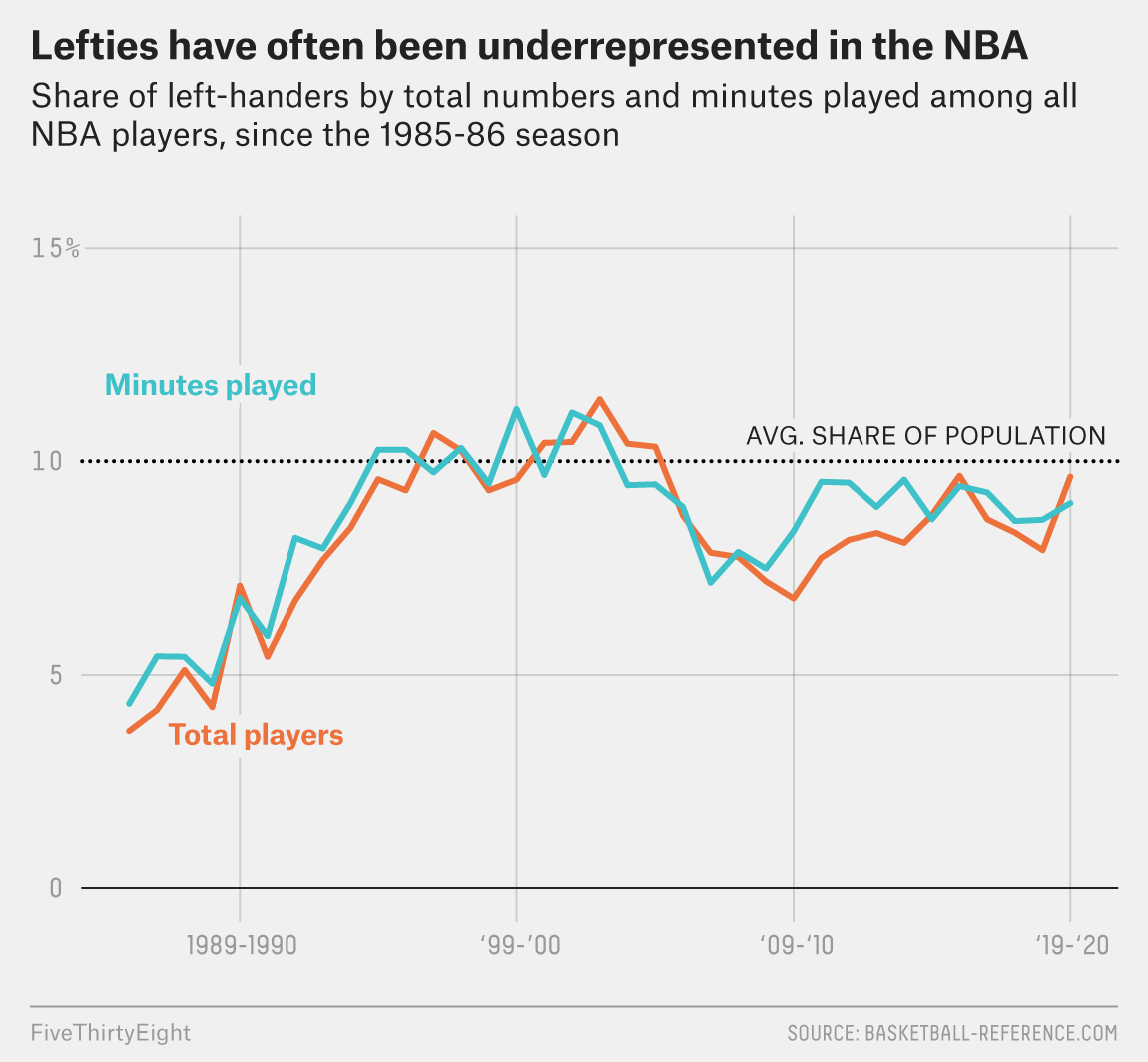 Without Williamson, this season’s crop of lefties have accounted for a smaller share of minutes played than may have been expected. Prior to the season, ESPN.com’s Kevin Pelton projected left-handers to account for their greatest share of leaguewide playing time since the 2002-03 season and to account for more than 10 percent of total minutes played for only the seventh time during the lottery era. Their current 9.0 percent mark is pretty close, but it still comes up short.

Williamson’s seasonlong absence is not the only contributing factor there. A significant portion of the league’s lefties have missed time due to injury this season, including a few of the best southpaws in the league. Mike Conley has missed 19 games for the Jazz, De’Aaron Fox has missed 18 games for the Kings, and Fox’s teammate Marvin Bagley III has missed 30. Rodney Hood has missed 24 games for the Trail Blazers and will miss the rest of the year with a torn Achilles. Goran Dragić was out for 10 games for the Heat, while teammate Justise Winslow has missed 32 games, with more still to come. D’Angelo Russell has sat out 18 Warriors games, Luke Kennard has missed 16 Pistons games … the list goes on and on.

All of those absences — plus regression from players like Julius Randle, Kent Bazemore, Thaddeus Young and Miles Bridges — have combined to drag down the overall performance of this group of lefties, to the point that this season just might be the single worst season for left-handed players during the lottery era. The argument isn’t even that difficult to make: During the 2019-20 season, lefties have collectively averaged 0.088 win shares per 48 minutes, tied for their worst average during that span.4 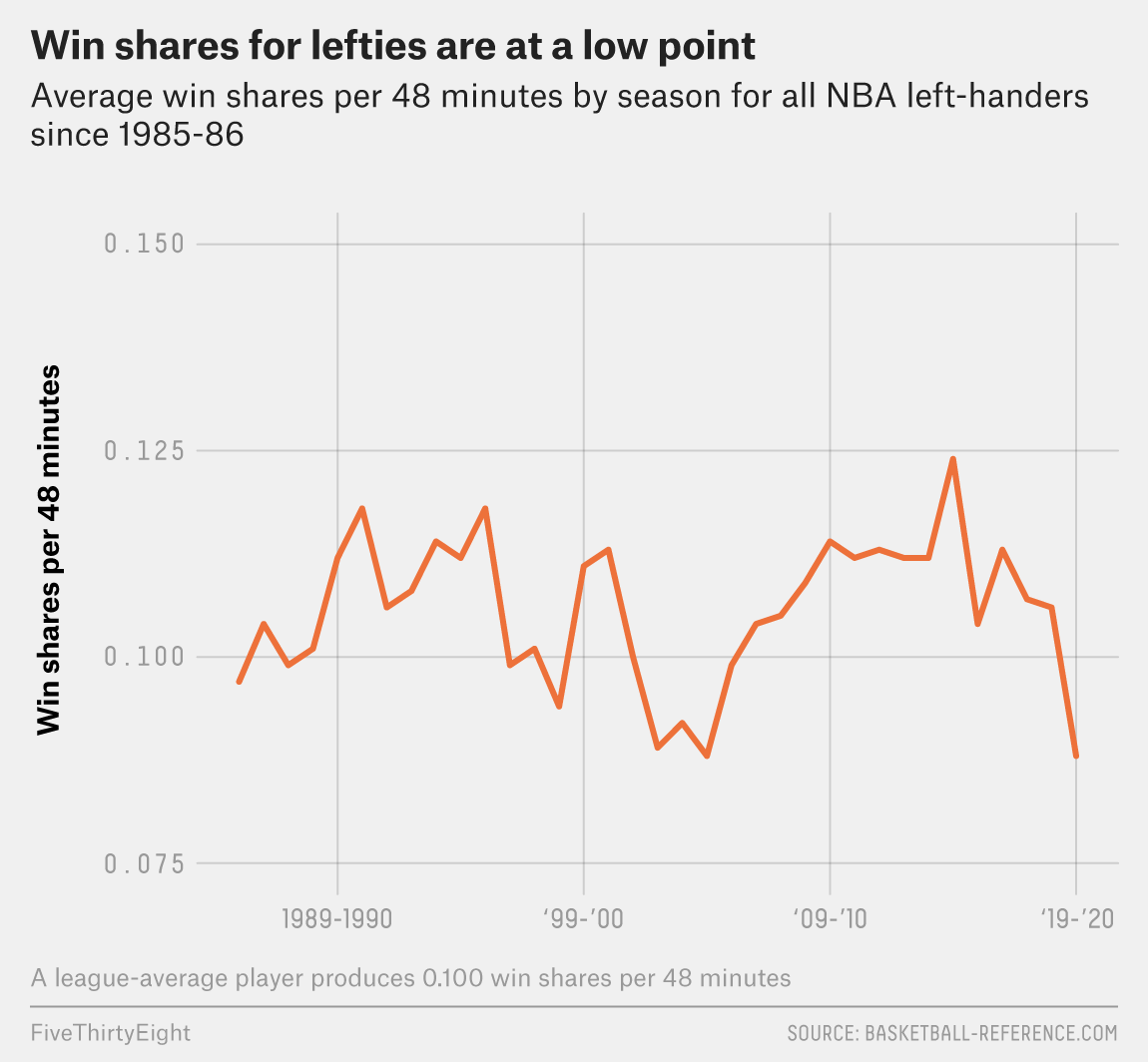 Perhaps Williamson’s return to play can hasten a bit of a southpaw renaissance, though. He’s the most highly touted lefty to enter the league in recent memory, and if his preseason production is any indication of what we can expect from him on a night-to-night basis, he’s going to do a whole lot of work to raise the standing of left-handers all by himself. If players like Fox can merely stay healthy and maintain their level of play, that should help as well. And if gains according to advanced metrics made by players like Rondae Hollis-Jefferson, Kelly Oubre, Jalen Brunson and Derrick Jones Jr. hold, that helps even more.

Preeminent lefty James Harden doesn’t look like he’ll be slowing down any time soon (recent shooting woes aside), but if and when he does, guys like Williamson, Ben Simmons and more will be ready to pick up the slack. And there’s another group of lefties coming up behind them.

Potential No. 1 overall pick James Wiseman is left-handed, for example.5 If he is actually the top pick, this would mark the first time in history that a lefty was the top selection in back-to-back drafts. And like Williamson, Wiseman is not alone among lefties in his class. Projected first-rounders Killian Hayes and Vernon Carey are lefties, and so is borderline first-round prospect Amar Sylla. That’s four more lefties ready to come in and potentially make an impact, and there are more waiting in the wings behind that crew.6 In other words, while things look bad right now, we should all probably be prepared for the rise of southpaws in the NBA over the next several seasons.