Another year, another 10 gorings. The annual nine-day running of the bulls festival in Pamplona, Spain, drew to a close today, with the inevitable bloody results: None was gored today, but five were hospitalized with major injuries in the last of eight runs.

The festival is one of the most jarring examples of just how imperfect a process natural selection is. The tradition began centuries ago as a way to transport bulls from their corrals to the bullfighting ring, and grew as more people decided it would be fun to run in front of the bulls and try not to die. Literally the only point of going is to survive extreme risk (and to slap a bull on the butt, apparently). And yet it seems just as popular on bucket lists now1 as it was when it shot to worldwide fame in 1926 with its depiction in Ernest Hemingway’s novel “The Sun Also Rises.” The danger is the appeal — but just how dangerous is it to run with the Pamplona bulls?

Record keeping on deaths (there have been 15) goes back to 1922, and Navarra — the region of Spain where the festival takes place — has kept track of every major injury that has resulted from the run since 1980. Using their data, I decided to find out for myself what the odds will be of ending up in a Navarra hospital when I inevitably partake in this exercise in idiocy.

Although the number of injuries has been volatile from year to year, it’s grown by about 5.1 percent on average each year since 1980. 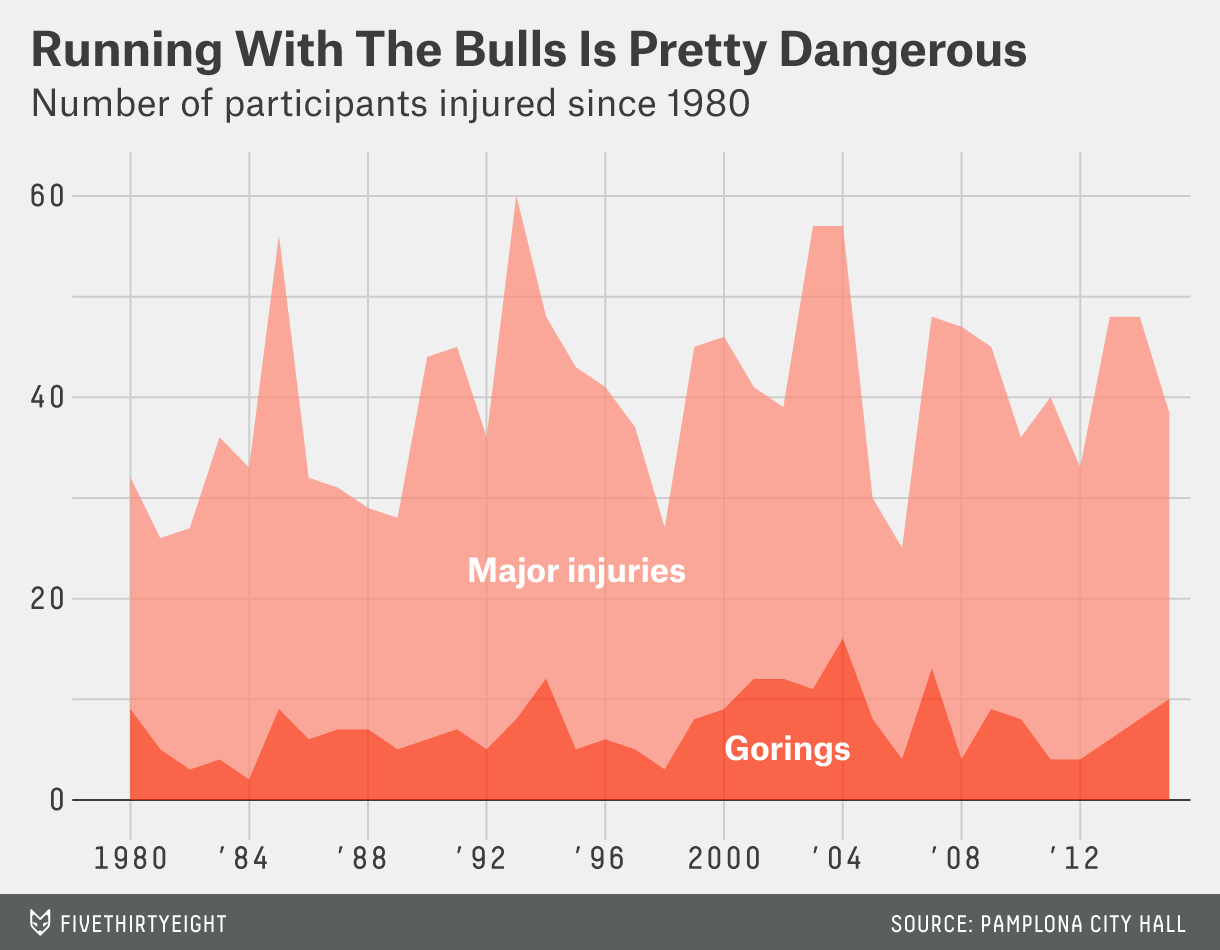 That’s what you might expect if attendance were growing, but it’s not. Pamplona’s City Hall has tracked exact annual headcounts since only 2011 (and hasn’t published numbers for 2015 yet), but the limited available data suggests that attendance is on the decline — 17,126 people participated last year, down from 20,500 in 2011.2

With injuries going up and attendance going down, each person who runs alongside the bulls has a higher risk of being injured every year. Based on 2014’s data, you’d have a 0.3 percent chance of being injured, which is the same chance of having an unproduced screenplay turned into a feature film.

But that doesn’t mean you should go ahead and don that pañuelo just yet. The Associated Press has kept detailed reports on how many people were gored — and the countries they hail from — every day of the festival dating to 2005. I used Nexis to determine whether runners from any nationality stood out. Obviously, Spaniards were hit hardest in terms of the raw number of gorings — 37 of the total 78 over the 10-year period. But Brits take home the prize for most disproportionate number of participants gored. They account for about 8 percent of gorings, but just 4 percent of participants.3

I’m sure this data will do little to dissuade my fellow prospective runners from heading to Pamplona one of these years — if anything, it’ll probably be used to argue that the odds are in your favor. But you’ll take the risk knowing that there have been only three days in the past 35 years when no one suffered a major injury. Hey, it’s gotta happen to someone.