Republicans have had a problem with young voters over the past few elections. Mitt Romney lost 18- to 29-year-olds by 26 percentage points in 2012 (after adjusting the exit polls to match the actual result). Romney lost among all voters by just 4 points. In 2010 — a great year for the GOP — House Republicans lost 18- to 29-year-olds by 14 points. They won among all voters by 7 points.

We know this by looking the national generic House ballot, as good an indicator as there is of the national political mood. Most generic ballot surveys only have somewhere between 100 and 300 respondents between 18 and  29 years old, which makes for a large margin of sampling error. But by taking an average across a number of surveys, we can get a good idea of how young voters are feeling.

In the past six months, eight generic ballot polls have been released with an 18- to 29-year-old cross tab. Together, they add up to well over 1,000 respondents. 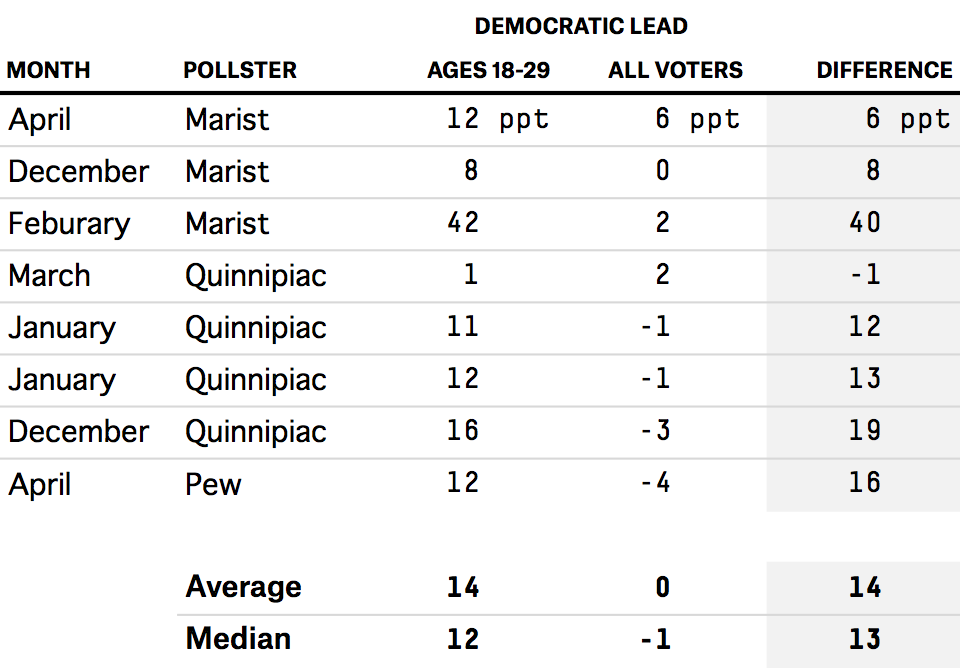 Democrats clearly hold a lead among young voters. Across the eight surveys from Marist, the Pew Research Center and Quinnipiac, Democrats hold an average lead of 14.3 percentage points and a median lead of 12.5 points. The median may be a better indicator because of the outlier Marist poll from February, though both results are close to each other. A 14.3-point win among 18- to 29-year-olds for Democrats would match their 2010 election performance, while 12.5 points would be a little worse.

Polling young voters is difficult. Even averaging across a number of surveys leaves room for error. Also, the likely voter electorate will almost certainly be more Republican than the registered voter electorate, though so, too, will likely younger voters. Younger voters in 2010, like all voters, were more likely to be white than in 2012.

Put it all together and, at least at this point, it looks like younger voters in 2014 may be closer to all voters than in the prior two elections.