As an old man, former president John Adams loved to describe the ways history had mistreated him — to detail the “perpetual volcano of slander, pouring on my flesh all my life time.” This habit eventually led to a manuscript of 440 pages and America’s first presidential memoir. Today, there’d be a bidding war to publish Adams’s tell-all. But in the early 1800s, Adams knew his book could not appear until after his death. Too many Americans saw publishing an autobiography, or even writing an autobiography, as a strange and arrogant act.

I’ve spent the last 10 years studying the history of presidential books for my own book, “Author in Chief.” But along the way, I discovered a strange little data set that helps explain how we went from an age when writing your autobiography was seen as risky and vain, to one when we’re constantly updating our autobiographies — one Instagram story at a time.

It all starts with a reference librarian named Louis Kaplan. In 1946, Kaplan began working on a deceptively ambitious project — a bibliography that would list every autobiography that had been published in America to that point. Kaplan studied old periodicals. He spent months on the road, visiting rare book libraries around the country. He befriended private collectors. And he got lots of help, especially when it came time to review the Library of Congress’s massive catalog.

After 14 years, Kaplan and his colleagues finally had their “Bibliography of American Autobiographies.” They ended up identifying 6,377 autobiographies published in the U.S. between 1675 and the 1940s, and their data shows the genre’s notable growth. Between 1800 and 1809, Americans published a total of just 27 autobiographies. One century later, during the decade between 1900 and 1909, that number had exploded to 569, easily outpacing population growth. 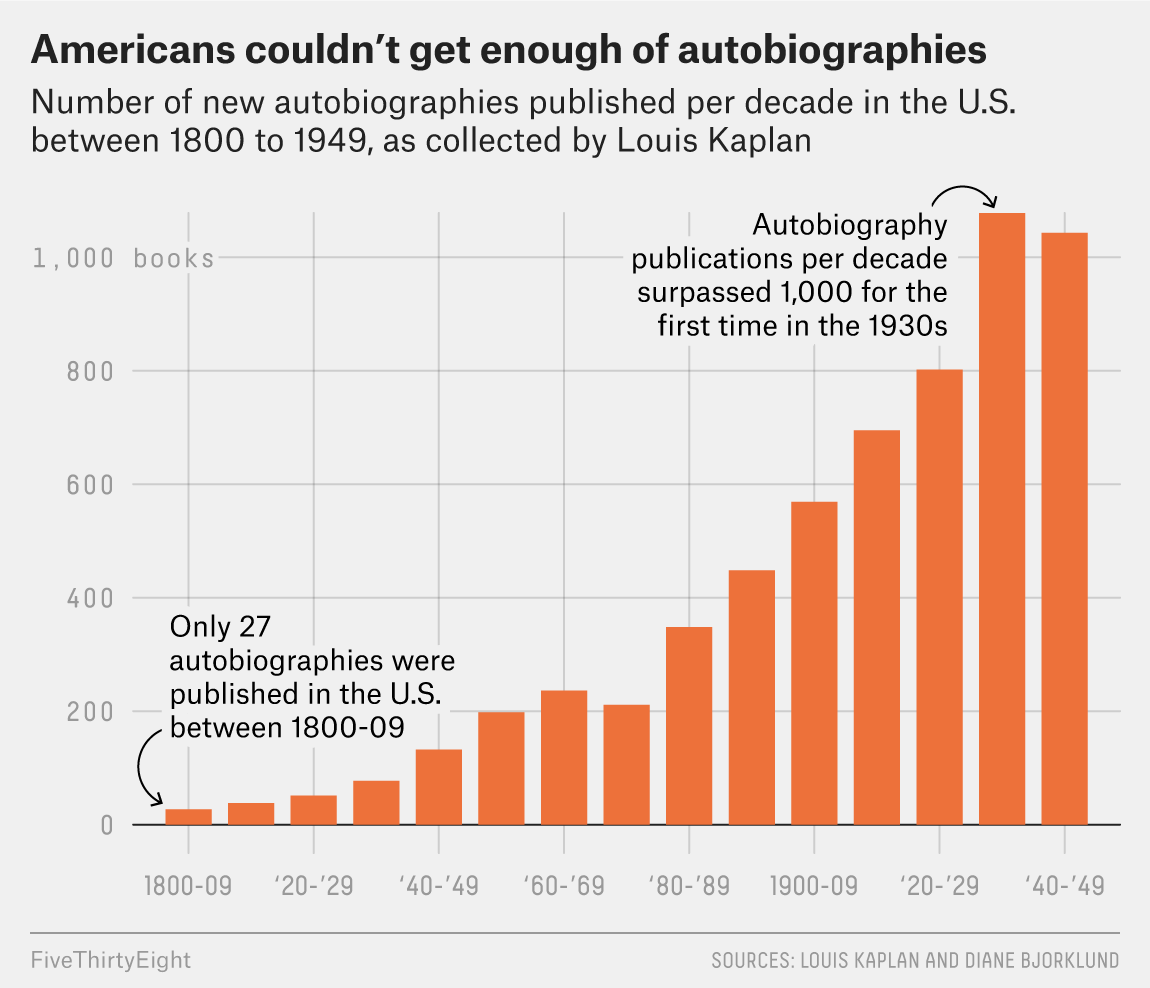 Kaplan’s data had flaws, of course. It was easier to miss older books, because they were older and because the prohibitive cost of manufacturing books meant fewer copies existed in the first place.1 More recent scholars have also critiqued Kaplan’s relatively narrow definition of “autobiography” and his undercounting of books written by women and people of color. But Kaplan’s book, along with Mary Louise Briscoe’s follow-up, remains the best resource available. As Jeffrey Levin and Thomas Cole put it in a 1996 journal article, “These limitations pale before the great wealth of historical material contained in Kaplan’s ‘Bibliography.’”

Some of the best analysis of Kaplan’s data set has come from Diane Bjorklund, a sociologist at Illinois State University who coded Kaplan’s entries for her own book, “Interpreting the Self.” Bjorklund spent about a month sorting Kaplan’s thousands of autobiographies by their authors’ professions — soldier, farmer, scientist, and so on. This sorting was both blunt and subjective; two farmers could write two very different books. “My coding can only provide a rough guide,” Bjorklund said in an email.

Still, that rough guide contains some fascinating hints about the historical anxieties surrounding autobiography. This anxiety has always shown up in anecdotes. One early American reader, for example, dismissed Jean-Jacques Rousseau’s classic “Confessions” as “an unnatural compound of vanity, meanness, and contemptible self-love.” It shows up in the data, too. According to Bjorklund’s coding, in the first half of the 19th century, more than half of all autobiographies published in U.S. came from one of two professions: religious figures and criminals. The explanation seems simple: One group had divine authority to tell their life stories. The other had nothing left to lose.

Slowly, the stigma against publishing autobiographies dissipated. “I’d point to Benjamin Franklin and his autobiography as the turning point,” said Susan Clair Imbarrato, an English professor at Minnesota State University-Moorhead who’s written extensively about the genre.

Bjorklund and Kaplan’s data reveals that as autobiography became more popular, it became more diverse. New varieties could rise and fall. During the 1840s and 1850s, there was a 600-percent increase in slave narratives, or autobiographies written by fugitive slaves that captured the brutality of life in the South. The nation’s real-time obsession with the Civil War also made it easier for generals and politicians to do what John Adams could not: publish their memoirs during their own lifetimes. In the 1860s, 50 military figures published their autobiographies — more than in the previous six decades combined. And during the Gilded Age, there was a boom in business autobiographies, with 48 appearing between 1880 and 1899 — more than had appeared in the previous eight decades combined.

That’s one of the most striking things about this data: The autobiographies that thrived during any particular moment said something about the desires of America and its readers. By the Roaring Twenties, the clergy-and-criminal bookshelf had dropped to less than a combined 20 percent of all autobiographies — the same era that saw a spike in memoirs written by a new kind of celebrity, the entertainer.2

In the 1940s, the last decade covered by Kaplan’s “Bibliography,” memoirs by entertainers proved one of the most popular categories. And yet, even those accounted for only 5.6 percent of the 1,043 memoirs that appeared in America during that span. That’s the other striking thing about these autobiographical numbers: Once autobiography truly caught on, no one category could dominate because readers had a huge variety of authors and styles to choose from.

This abundance feels like a good description of our current moment — not just on the print bestseller lists, but in social media, as well. And yet the data makes clear that, once the anxiety over autobiography faded, the genre’s range became an essential part of its appeal. Readers have been curious about all sorts of experiences for a while now. Back in 1909, William Dean Howells, perhaps the most influential critic in the U.S. at the time, wrote an essay championing the genre. While he praised Franklin’s book, Howells seemed most excited about the diversity among autobiographies. “All autobiographies are good for one reason or other,” Howells wrote, before saying that autobiographies aren’t restricted to authors of “any age or sex, creed, class, or color.”

The data largely supports Howells’s assertion. While researching that same decade — 1900 to 1909 — Bjorklund counted 31 different categories that contained at least two new autobiographies. A significant number of people reading, sharing and responding is not a byproduct of Instagram. That’s a byproduct of autobiography itself.

Craig Fehrman is the author of the book “Author in Chief: The Untold Story of Our Presidents and the Books They Wrote.”