Dr. Christopher Parker is still in the process of reporting and analyzing data from his recent poll, but in response to some of 538’s reader requests he was kind enough to provide me some data he had not yet planned to release. This post piggybacks on two earlier posts I wrote on the subject of tea partier attitudes, and also comes a day after a new New York Times survey and article about tea partier attitudes. That survey, which Nate wrote about earlier this morning, did not poll racial or racist attitudes directly, but did tap into a strong sentiment among tea party supporters that the Obama administration “favors blacks” and that “too much has been made of the problems facing black people.” Though I have my own very strong views about the meaning and proper label for such sentiments, I’ll leave it to 538 readers to conclude for themselves whether or not such views constitute “racist” or “racially-intolerant” attitudes.

Below is a table I created from all the data Dr. Parker provided me. Dr. Parker informs me that he has been doing deeper analyses and will be publishing his findings on the WISER website by early next week.

The data report averages–cell entries are percents–for four subsets and the full universe of white poll respondents to nine survey questions related to race, immigration and gay rights. The data include two subtotals we already knew about—whites who “strongly approve” or “strongly disapprove” of the tea party movement—as well as subtotals for whites who “somewhat approve/disapprove” and those who have no opinion and/or couldn’t identify the tea party, plus the total for all whites. I sorted the columns in a more or less left-center-right fashion, with the strong disapprovers on the left, strong disapprovers on the right, and the other three categories in the middle sorted based on the results. 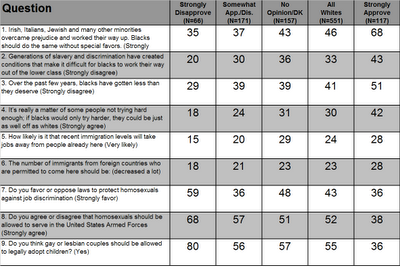 What we can see, not surprisingly, is that in every case but two the means for those for what I’ll call the three non-polar middle columns—i.e. those who somewhat approve/disapprove, those who didn’t know, and all whites—fall in between those for the two polar subsets. The two exceptions are the “don’t know” subset on Question 5, who have greater worries about immigration taking jobs away than strongly-approving whites; and the somewhat approving/disapproving subset on Question 7, who have the same opinion as strongly-approving whites on the issue of gay workplace discrimination. The remaining 25 of the 27 cell entries in the middle three rows fall, not unexpectedly, in between the poles.

As to the question of how far from the mean response for all whites the means for the strong approver and disapprover subgroups fell—let’s just steer away from the Gallup-suggested term “mainstream” I regret using in my first post because it’s simply too subjective and normative as a label—in most cases the distance is about the same, or within a few percentage points of the same distance. On Question 2 (13 points/10 points); Question 3 (12/10); Question 4 (12/12); Question 6 (5/5); and Question 8 (16/14), the differences are small enough to be effectively the same, given margin of error. However, I would caution that the totals for all whites of course include the responses of both the strongly approving and strongly disapproving subsets, and because the former account for almost twice as many respondents (117 to 66), their weighting artifactually pulls that average closer to their subgroup response averages. (#If this statistical point is not immediately obvious to some, see the footnote below.)

But I maintain that this is, at best, a minor and perhaps semantic point, one that grew out of this whole business of what constitutes “mainstream.” The bottom line is that—and here I’ll try to use a better term—both strong approvers and strong disapprovers have abnormal views about black, immigrants and gays–abnormal in the literal sense of deviating from the mean, not deviant. (The poll, like many polls, also cannot account for social desirability biases that may in fact result in lower levels of expressed racism, xenophobia and homophobia–although, of course, those effects would not necessarily be limited only to whites who say they strongly approve of the tea party movement.)

More specifically, for tea party supporters, those abnormal views in every case but one or maybe two reflect higher expressed levels of racism, xenophobia, and homophobia. Some commenters wondered if TP approval is merely a proxy term for “white conservatives,” and vice versa for disapprovers/”white liberals.” However, in detailed multivariate results that control for ideology which Dr. Parker assured me by email he will soon publish in detail on the WISER website, tea party approval or disapproval is not simply a proxy for these labels, and does in fact have independent explanatory power of the level of intolerance expressed by whites. In any case, the idea that the recent Gallup demographic study “proves” that the views of tea partier supporters are “mainstream” is, it’s fair to say, a fiction.