It’s supposed to be the food fight of the century. In the blue corner we have Yelp, the upstart crowdsourced review site that takes on restaurants of all shapes and sizes. Critics allege that Yelp reviewers are unsophisticated, cheap and obsessed with trivial details of the restaurant experience. But Yelp is a heavyweight. The company is now worth about $5 billion, and poor Yelp reviews can knock a restaurant out of business.

In the red corner, we have the Michelin Guide, a 114-year-old veteran of the field. Michelin reviewers are accused of being pretentious and “out of touch” and of enforcing a rigid view of dining that’s biased against certain cuisines. But Michelin still packs a punch — it can make chefs cry. Of the 27 New York restaurants to have lost their Michelin stars since 2005, 10 — or almost 40 percent — have closed.1

But at least when it comes to New York, this isn’t much of a battle. Yelp and Michelin largely agree on the best restaurants.

The tale of the tape is below. Most of the columns should be self-explanatory, but a brief explanation of the others follows:

Here are the restaurants sorted by VORB score:

Keep in mind that VORB reflects both review quality and review volume. Peter Luger Steak House rates high on the VORB list mostly because of its extremely high number of reviews. On the flip side, Chef’s Table at Brooklyn Fare has a low review volume6 but its Yelp rating (4.62 stars) is terrific.

But let’s get back to the food fight (or lack thereof): There’s a reasonably strong correlation between Yelp and Michelin ratings. Of current and former Michelin-starred restaurants, those with the highest VORB scores are Le Bernardin (28.7), Eleven Madison Park (28.2), Gramercy Tavern (27.7), Daniel (26.6), Per Se (25.9) and Jean-Georges (23.3). Four of those six restaurants have three Michelin stars, the top rating. The exceptions are Daniel, which was just demoted to two Michelin stars, and Gramercy Tavern, which has one.

By contrast, most of the restaurants with the lowest VORB scores have since lost their Michelin stars, (and in some cases have also closed). The bottom five are the defunct Vong and the still-open Laut, Pok Pok NY, Lan Sheng and A Voce Columbus. Mind you, these aren’t the worst restaurants in New York. I’d personally vouch for a couple of them as being pretty good. But the standard is high, and Yelpers feel they’re closer to average than to the top tier. 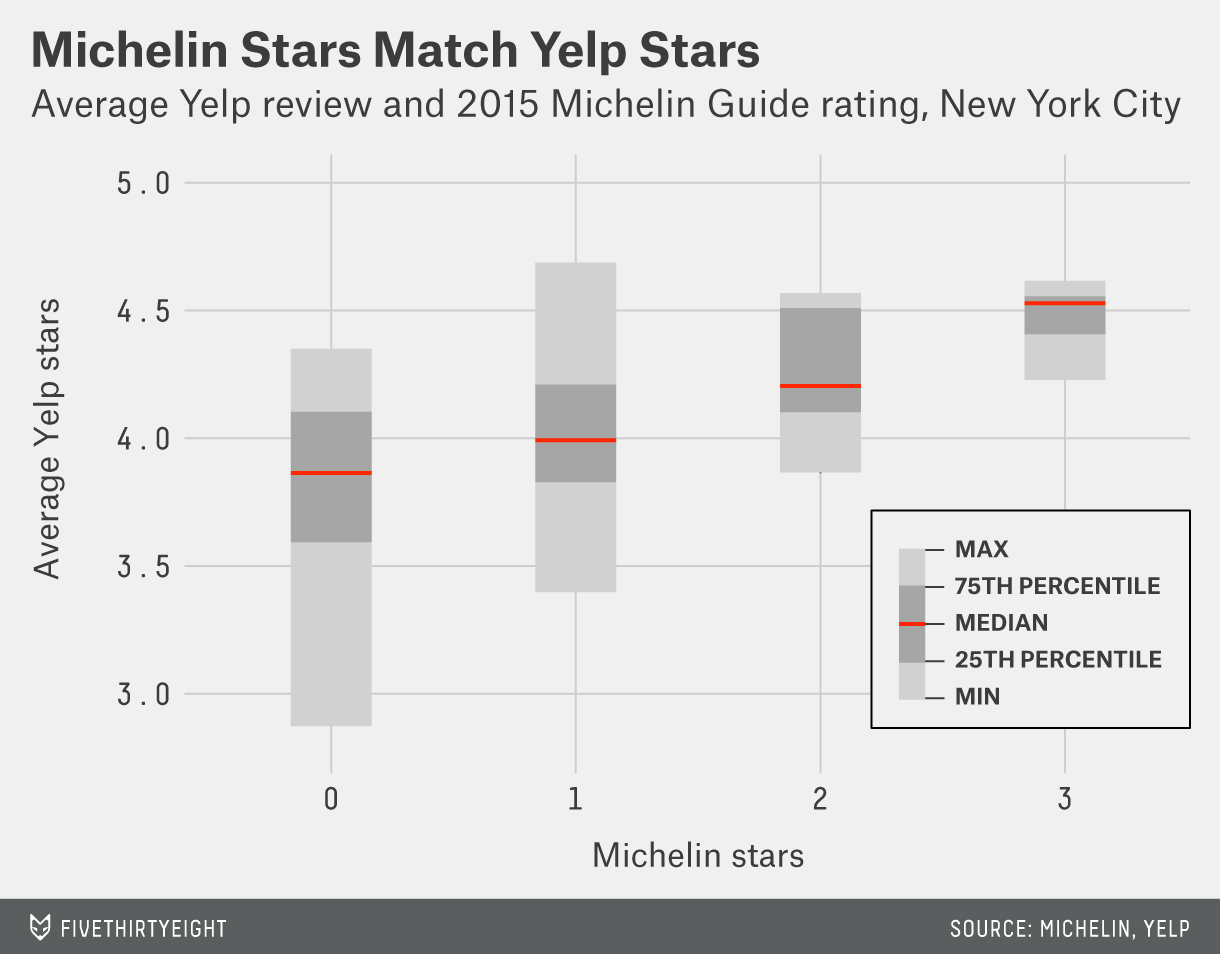 Still, these reflect the group averages, and there are a few restaurants that buck the trend. Gramercy Tavern, as I mentioned, is rated very highly by Yelp but has just one Michelin star.

Where do differences arise? One apparent theme has to do with cost — but it runs in the opposite direction of what you might expect. Controlling for their Michelin ratings, Yelp actually rates restaurants higher when they are more expensive. Each additional dollar sign (e.g. going from $$ to $$$) works out to 0.2 additional Yelp stars; the relationship is highly statistically significant.

What the heck? I can think of several plausible theories:

Keep in mind that this finding is derived only from New York restaurants that currently or formerly held a Michelin star — a very narrow range of culinary experience. In looking at a vastly different type of restaurant — those which serve burritos — my colleague Anna Maria Barry-Jester instead came away with the impression that Yelp reviewers place too much emphasis on price and portion size as opposed to the quality of the food.

My personal experience has been that perception of price has a lot to do with expectations. You might be outraged when a mediocre sandwich costs $13 at a museum cafeteria or a ballgame — or when a mediocre burrito costs $11. But later that night, you might not flinch at spending $350 while taking your wife out on her birthday because you were expecting the steep bill.10

Another theme is that certain cuisines do poorly in Yelp as compared with their Michelin star ratings. Consider the four restaurants with the lowest VORB scores. They are (or were), respectively, a Vietnamese restaurant, a Malaysian restaurant, a Thai restaurant and a Chinese (Szechuan) restaurant.

It’s not that Yelpers rate these cuisines poorly overall. But in the United States, they tend to be associated with cheap takeout food. Even to a fairly experienced diner, a Michelin-starred Thai restaurant might seem like an oxymoron.11 Michelin’s reviewers may also lack a template for these types of restaurants. Zabb Elee, an unpretentious Thai restaurant in the East Village, earned a Michelin star this year. It’s very good, but most foodies I know prefer SriPhaPhai in Queens (SriPhaPhai also gets much better Yelp ratings).

Outside of the canonical European cuisines (French, Italian) and “new American” food,12 Michelin seems to struggle. Thai restaurants and Indian restaurants, for example, have often won Michelin stars only to lose them a couple of years later. It’s almost as though Michelin is cycling through representatives of these cuisines at random — putting forth some effort to increase the diversity of its list but not going to great lengths to identify the best examples. To a lesser extent, Michelin may struggle with American food served in a more informal setting or for what lack of a better term might be called “hipster” cuisine. The Breslin, a gastropub in the Ace Hotel, has a Michelin star, but there are dozens of similar restaurants with higher Yelp ratings.

Could Michelin also have a pro-Manhattan bias? In one respect, this might seem self-evident. Almost 80 percent of the Michelin-starred restaurants in the 2015 Guide are in Manhattan while only 40 percent of New York’s restaurants are.

One way to test this is to look at whether Michelin-starred restaurants in Brooklyn and Queens13 receive higher Yelp ratings on average. If so, that might indicate that restaurants in the outer boroughs need to do more to receive the same level of recognition from the Michelin Guide.

The evidence is ambiguous. Michelin-starred restaurants14 in Brooklyn and Queens have an average Yelp rating of 4.17, as compared with 3.99 for those in Manhattan. However, the difference is not highly statistically significant and there is no real difference in their VORB scores. This doesn’t mean Michelin is unbiased — it may be that Yelpers have the same biases.

In most respects, the challenge in evaluating restaurants is the same as when looking at any other statistical distribution. It’s easy to identify the outliers — the extraordinary restaurants and the execrable ones. Michelin and Yelp largely agree on those. Distinguishing the very good restaurants from the average ones is more challenging. There may be no substitute for eating your way through them.