A Quinnipiac University poll released Monday found that, in a hypothetical Yankees vs. Mets World Series, 59 percent of New York City residents would root for the Yankees, and 37 percent would favor the Mets. The Yankees haven’t always had such a large lead on this question. So what influences the balance between Yankees and Mets fandom in New York?

There isn’t a strong relationship between the Mets’ or Yankees’ winning percentages and New Yorkers’ Subway Series preferences. Nor does there seem to be much of a connection between the Yankees making the playoffs and whom New Yorkers would root for. Most sports fans want their team to win but know it often won’t. The Yankees are different. Winning isn’t hoped for. It’s expected.

The Mets have a somewhat lower bar to clear. Quinnipiac’s polling suggests that in the battle for hearts and minds in the Big Apple, the Yankees’ success is baked in, assumed. The Mets making the playoffs is what appears to sway New Yorkers. 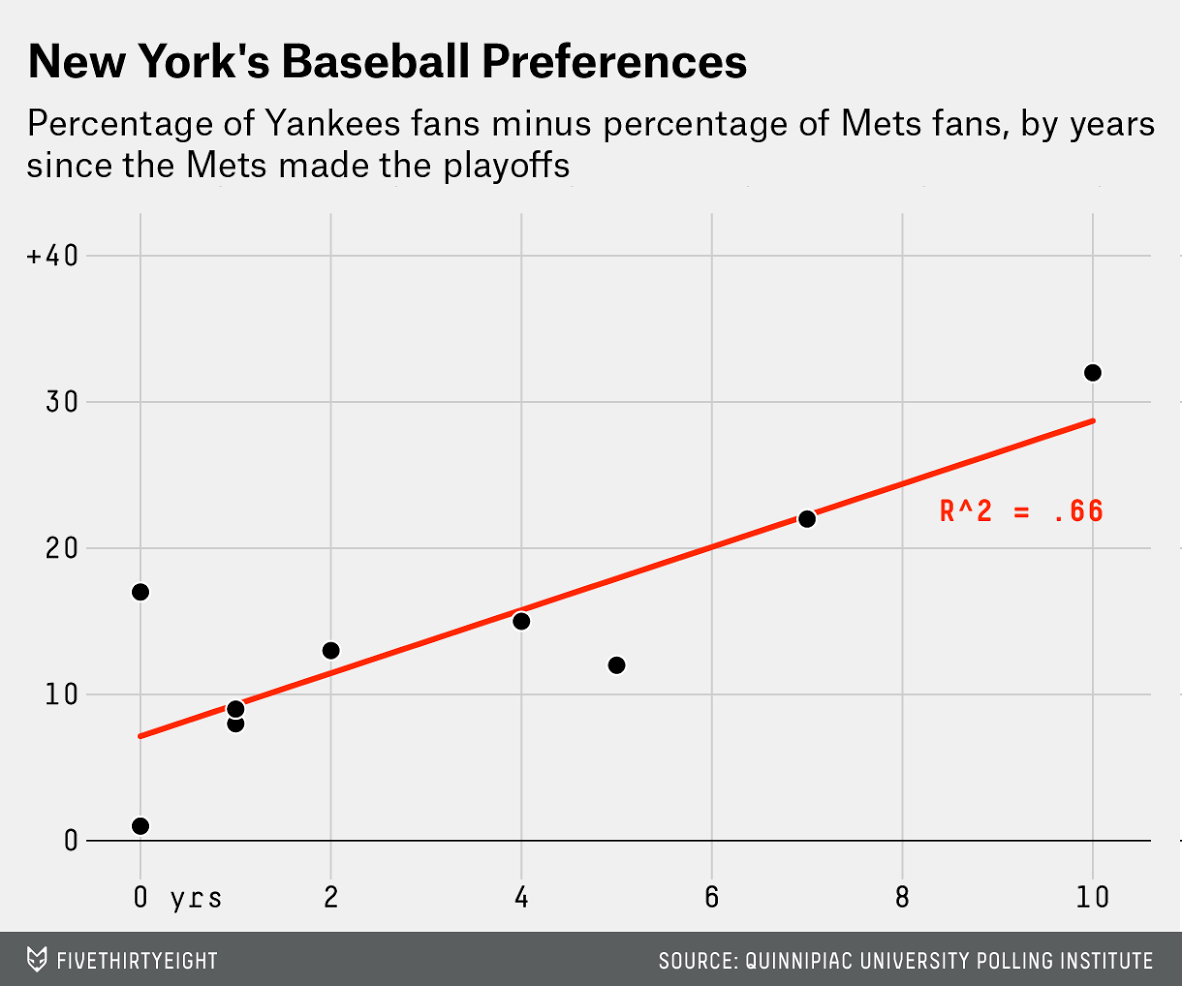 The Mets came closest to parity with the Yankees after the 2006 season — the only season in the past 25 years when the Mets advanced further in the playoffs than the Yankees. The Mets shaved the Yankees’ advantage down to one point in a survey conducted a few months into the 2007 season. (Note: We assigned each poll to the prior season if it was conducted before the All-Star break.)

But the Mets haven’t made the playoffs since 2006, and the fan base in New York has slowly slid toward the pinstripes. The 22 percentage-point gap in the most recent Quinnipiac survey was the second largest found. The Yankees held their largest lead in the Quinnipiac poll taken about midway through the 1998 season, when it had been 10 years since the Mets made the playoffs.

For each additional year removed from a playoff appearance, the Mets fall by an average of about two more points behind the Yankees in a hypothetical Subway Series.

We’re dealing with only nine data points, which means the relationship might not hold in future polling. And factors besides the Mets’ success contribute to whom New Yorkers support.

Case in point: The biggest outlier above is a poll taken after the 1999 season, when the Mets had made the NL championship series. But the Yankees still held a 17 percentage-point edge in the Quinnipiac survey. Why? The Yankees were coming off three World Series wins in four years. This suggests that the Yankees have some control over New Yorkers’ hearts, even if the effect isn’t nearly as significant as the Mets’.