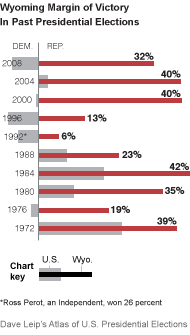 Early on in Wednesday’s presidential debate, President Obama and Mitt Romney began sparring over energy, where to get it and how to achieve energy independence. It was probably at that point when the ears of Wyomingites perked up.

With just under 570,000 residents, Wyoming is the smallest state by population. Less than one-fifth of 1 percent of Americans live in Wyoming.

Mining accounts for almost 1 in 10 Wyoming jobs, and — as is the case in West Virginia — the perception that the Democratic Party is hostile to coal has hurt the party in Wyoming. But Wyoming’s pro-coal position is just one of many characteristics that make the state a Republican bastion.

Wyoming is among the least diverse states. It is the top gun-owning state. Wyoming is also one of the least urban states. The biggest city, Cheyenne, isn’t very big; about 60,000 people live there. The state’s second-largest city is Casper, which has about 56,000 residents.

“Regardless of what the Census Bureau might call urban,” Mr. King said, “there really is not an urban area in Wyoming.”

It’s all a recipe for a reliably red state: according to Gallup’s State of the States survey, 59 percent of Wyomingites lean Republican and just 26 percent lean Democratic, placing it second behind Utah in Republican support. Wyoming was where Mr. Obama made his worst showing in 2008. He received less than 33 percent of the vote there. 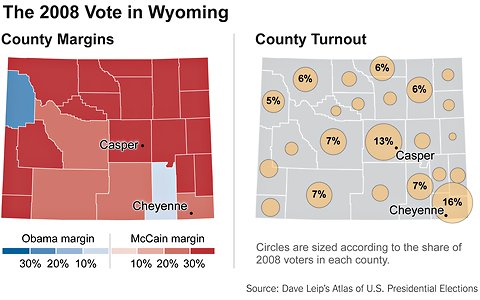 Wyoming once had a fairly defined partisan landscape. In the south, blue-collar workers like those who built the Union Pacific Railroad favored Democrats, and the southern string of counties in Wyoming leaned left. In fact, Wyoming was once a national bellwether. From 1900 through 1940, Wyoming picked the winning presidential candidate in every election.

But those days are long gone. Wyoming is now a sea of red. There are now “degrees of Republicanism rather than Republican regions versus Democratic regions,” Mr. King said.

The northeast is probably the most Republican-leaning part of the state. It is also the state’s largest coal-producing area, mostly due to Campbell County. Counties in the southwest, which are also uniformly Republican, are heavily Mormon. Nine percent of Wyoming’s population are members of the Church of Jesus Christ of Latter-day Saints. The state is tied with Nevada for the third-highest percentage of Mormons in the country. 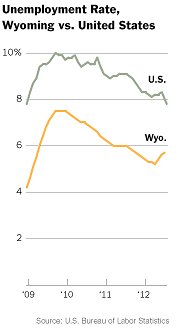 There are just two blue islands in the state. Mr. Obama won 61 percent of the vote in Teton County, in northwest Wyoming, where Jackson Hole has attracted affluent liberals from out of state. Mr. Obama also carried Albany County, home to the University of Wyoming in Laramie.

Hispanics, at 9 percent of the population, are the largest minority in Wyoming. They are concentrated in the southern and eastern part of state, Mr. Frankland said. Over the last decade and a half, many Hispanics have come to Wyoming for jobs in agriculture (Wyoming’s third largest industry) and tourism (the state’s second biggest industry). Yellowstone National Park and Jackson Hole each attract millions of visitors a year.

Over the last three presidential elections, Natrona County has become more Republican-leaning and an improved barometer for the statewide vote. In 2008, it matched the state almost exactly. Although the shift could be statistical noise, Natrona County was three percentage points more Democratic than Wyoming over all in 2000, two points more Democratic in 2004 and one point more Republican than the state as a whole in 2008.

Mr. Romney is a 100 percent favorite to carry Wyoming’s three electoral votes. Wyoming has not favored a Democratic presidential candidate since 1964.

At the state-level, however, moderate Democratic governors have been very competitive. Former Gov. Dave Freudenthal, a Democrat who served from 2003 to 2011, had the highest approval ratings in the nation at one point. Wyoming’s electorate is small enough that moderate and charismatic Democrats can overcome the state’s partisan gravity.

But currently Republ
icans have a thorough hold on Wyoming, and the state’s main ideological fault line doesn’t even involve Democrats. It divides the relatively socially moderate, libertarian wing of the Republican Party and the more conservative side, Mr. Frankland said.

In the Wyoming Republican Party, “there’s a real divide between the libertarians and the social conservatives,” Mr. Frankland said. “And so we’ve had battles here in the state over abortion and other issues. The libertarian side seems to win out usually, but it’s an ongoing struggle within the Republican Party.”