One of the many nice things about Survey USA is the extensive set of interactive cross-tabulations that they release with every poll. Survey USA has now released polls in fifteen states that were taken at the height of the Jeremiah Wright controversy (this past Friday through Sunday). We can compare the demographic groups in these polls to Survey USA’s previous set of polls, which were conducted in the last couple days of February.

I will be keeping track of five sets of demographic characteristics that Survey USA included among both sets of polls: gender, age, race, party ID, and orientation on the political spectrum (conservative/moderate/liberal). Another demographic that would be nice to look at — income levels — was tracked by Survey USA in their February polls but not in their March polls, so we have no choice but to ignore it.

One other methodological annoyance: Survey USA used different age brackets between the different surveys. Although the 18-34 age group was common to both polls, Survey USA handled the other groups of voters differently. I will be lumping the brackets together as follows:

Otherwise, this is a rather straightforward exercise: I’m merely comparing Obama’s net advantage against McCain between the February and the March surveys. If Obama was leading among whites in Oregon by 6 points in February, but he trailed by 2 points in March, that would be recorded as a “-8”. 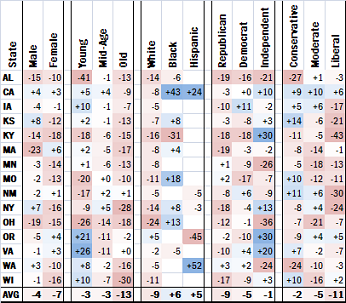 (That chart might be a little hard to read, so I’ve temporarily created a larger version of it along the right-hand sidebar. Yes, we’re the only website in the world that devotes more space to its sidebar than its main column).

Let’s pick through these demographic groups one by one:

Gender: Obama’s margin declined by a slightly larger margin among women (7 points) than men (4 points), but the differences are small enough that they’re probably not worth worrying about. The gender gap was most noticeable in the Midwestern states. Between Missouri, Kansas, Iowa, Minnesota, Ohio and Wisconsin, Obama declined by 12 points among women but 4 points among men. Elsewhere in the country, the gender differences were roughly equal.

Age: There do seem to be some age-related effects, with the Wright story tending to have done more damage to Obama among older voters, but because of the ambiguities of Survey USA’s age brackets, it would be dubious to come to too many conclusions. Taking the 55-64 year olds and shifting them from “Old” to “Mid-Age”, as we had to do here, would likely have a deleterious effect on Obama’s numbers irrespective of the Wright controversy.

Race: Perhaps unsurprisingly, Obama lost ground in every state except Oregon amongst whites. He gained ground amongst blacks in all states except the three Southern states: Alabama, Kentucky, and Virginia, where he actually backtracked a little bit. The polling data on Hispanic voters is mixed … the only two states with a whole lot of Hispanic voters were California and New Mexico, and Obama gained a bunch of ground amongst them in California (+24), while losing a bit in New Mexico (-5). Notice, by the way, how the media seems to have completely forgotten about Hispanic voters now that we have a good ol’ fashioned white-black racial controversy to kick around.

Party ID: Obama lost the most ground — an average of 9 points — amongst Republicans. This is actually fairly hard to do, because there weren’t that many Republicans voting for him to begin with. But for the time being, the Obamacans appear to be in hibernation. The interesting piece of news for Obama is that he lost hardly any ground at all amongst independents, although the results bounced around rather radically from state to state. (Survey USA tends to have fewer self-identified independents in their surveys than other pollsters, and so the sample sizes are a little smaller).

What to make of these seemingly contradictory results?

Actually, I don’t have a great answer for you. Let’s try and get a discussion going. But it certainly looks to be thatliberal and moderate Republicans — not independents, but specifically voters who identify as Republican — who were willing to indulge the idea of an Obama vote before, have at least temporarily reverted to their base.

Now, if you accept that this is what has gone on, there are a couple of takes you might have on this. Shall we spin the wheel? 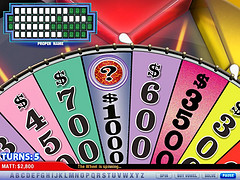 Spin #1. These voters were inherently soft, vulnerable supporters of Obama anyway. It is asking a lot for Republicans to cross over and vote for a Democrat — only 6 percent of them voted for Kerry in 2004. The way Obama — or Clinton for that matter — was always going to win this election was by turning out the base, winning over independents, and taking advantage of the blue-leaning shifts in party identification throughout the country. You do two out of those three things (and one of them is really a gimme), and you’ll probably win the election. You do all three, and you win big.

On the other hand, if these voters were soft supporters of Obama, that likely now means that their support for John McCain is also fairly soft. There are really relatively few swing voters in the general election — 80% of the country is voting reflexively by party ID — which is why polling numbers in general elections are much more stubborn than polling numbers in primaries. But, sort of Linc Chafee / Olympia Snowe Republicans, and perhaps also libertarian-leaning Republicans, are a group of voters that must feel authentically conflicted about what to do. It doesn’t take a lot to shift them from one group to the other — nor might it take a lot to shift them back.

These may also have been voters who were intrigued by Obama’s unity message, a brand which was at least temporarily damaged by Jeremiah Wright.

Spin #2. On the other hand, perhaps this also has to do with media consumption habits. The Wright story was handled very differently from media outlet to media outlet, from a full-frontal assult on Obama on FOX News, to a relatively benign treatment at the New York Times. (This effect is even more noticeable in the wake of Obama’s speech on Tuesday, which has acted as a depth charge of sorts for partisan conservative pundits). Do Obamacans still watch FOX News and listen to Rush Limbaugh? My hunch is that they do — that it forms their sort of home base for media coverage, even if they often disagree with its conclusions. When the conservative media went from playing relatively nice with Obama to bashing him non-stop, there was going to be an effect; the Wright incident may have catalyzed it.

Actually, now that that’s written, these are really part and parcel of the same explanation. Swing Republicans were vulnerable to being swung — and the Wright story, amplified by the conservative media, managed to swing some of them. Will Obama’s speech swing them back? I don’t know. As I mentioned above, it is inherently an uphill battle to ask a voter to cross party lines for you. On the other hand, I would guess that these folks are fairly sophisticated political animals — you have to have a fairly well-thought out political philosophy to maintain an identification as a Republican these days, but ponder voting for a Democrat for President. And that means they might have been among the 2.3 million Americans and counting who have seen the director’s cut of Obama’s speech, rather than the sound byte version. It is likely to take at least a couple of weeks before we know for sure.