Granted, the teaser in the title is something of a trick question. The NFL’s St. Louis Rams are now 0-5, and have allowed 112 more points than they’ve scored, a pace which, if sustained, would lead to a -358 point differential on the season, shattering the modern mark (-287) held by the 1976 Tampa Bay Buccaneers. So whether or not Rush Limbaugh takes an ownership stake in the franchise, as he is contemplating doing, the team is not likely to get a lot worse, at least in the near term.

In the long run, however, Limbaugh could conceivably create a few headaches for the team. The NFL Players’ Union, for instance, has issued a statement urging the owners to reject Limbaugh’s bid. On the other hand, the NFL’s union is notoriously weak, and enjoys a less cozy relationship with its players than the MLB or NFL unions. What is the league’s rank-and-file liable to think about Limbaugh?

A good starting point is to evaluate political contributions made by NFL players. Searching on Huffington Post’s Fundrace site, I looked up political contributions made by NFL players to Presidential candidates, the RNC and the DNC over the 2004 and 2008 political cycles. The search covered the names of 32 NFL teams as well as the terms “NFL” and “National Football League”, as listed under the employer category. Only active players — not owners and executives, which in the NFL are overwhelmingly conservative — were evaluated.

It turns out that among the contributions I could identify, some $31,655 went to Republicans and $18,285 went to Democrats. So perhaps not all that many players would have a problem with Limbaugh, and some might rather like him.

On the other hand, only a relative handful of NFL players are making any kind of contributions at all, so this group may not necessarily be representative. One very basic thing we can do is to look at the race of the players making these contributions. 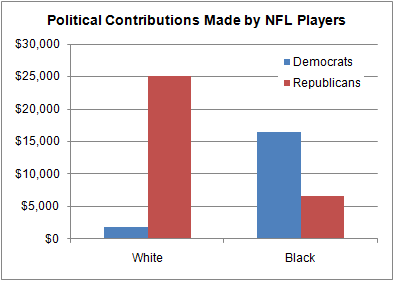 As you might expect, there is a rather stark racial divide in the political leanings of NFL players. Some 93 percent of the contributions made by white players went to Republicans; on the other hand, 71 percent of the contributions made by black players went to Democrats. If we re-weight the totals to reflect the league’s actual racial makeup, it would imply that NFL players are almost evenly divided between Democrats and Republicans.

On balance, then, Limbaugh is still probably more likely to deter players from coming to St. Louis than encourage them, particularly among positions dominated by minorities. It’s probably not a distraction an 0-5 team needs. With that said, if the NFL is truly a collection of 32 independent businesses — as the league claims periodically when defending its limited anti-trust exemption — it is not clear what right the owners of the other 31 franchises have to scrutinize the ownership decision made by the Rams.