Today we continue our Presidential Geography series, a one-by-one examination of the peculiarities that drive the politics in all 50 states and the District of Columbia. Today’s stop: Minnesota, Land of 10,000 Lakes. FiveThirtyEight spoke with Lawrence Jacobs, a professor at the University of Minnesota and the director of the school’s Center for the Study of Politics and Governance.

By most accounts, Tim Pawlenty, the former governor of Minnesota, is one of the top names on Mitt Romney’s list of potential vice-presidential nominees. Mr. Pawlenty is liked, though perhaps not loved, by the main pillars of the Republican Party — social conservatives, the Tea Party and establishment Republicans — making him a safe choice for a risk-averse Romney campaign.

But if Mr. Romney is looking for a vice-presidential nominee that might also bring along votes from their home state, Mr. Pawlenty might be a poor choice compared to someone like Senator Rob Portman of Ohio, who comes from a state that is a genuine tossup. The home-state effect of a vice-presidential nominee can be overrated in any case, but Minnesota has the longest streak of voting for Democratic presidential candidates than any other state in the nation.

Still, like many of the states we have profiled, partisan allegiance in presidential voting can mask a more nuanced picture on the ground. In four elections since 1972, the Republican presidential candidate has come within 4 percentage points of winning Minnesota. And in the early 2000s, Republicans gained ground in the state. Enough ground, in fact, that the Republican Party held its national convention in St. Paul in 2008. 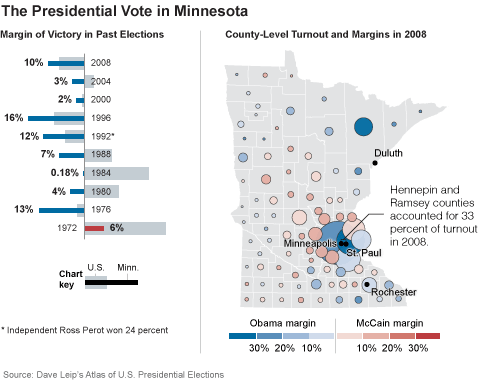 The polka-dot pattern is exemplified by the Fourth, Fifth and Sixth Congressional districts. Keith Ellison, the first Muslim elected to Congress and a co-chairman of the Progressive Caucus, represents Minnesota’s Fifth District, which includes Minneapolis. The bulk of the Democratic votes in the state come from this area, along with St. Paul in the Fourth District.

The Sixth District, which is adjacent to the Fourth and Fifth, is represented by Michele Bachmann, the conservative firebrand. Mrs. Bachmann’s district along with the Second District, to the south of Minneapolis and St. Paul, encompasses most of the suburban and exurban communities surrounding the Twin Cities. The two districts are the anchor of Republican support in Minnesota.

The rest of the state is less densely populated. North-central and northeast Minnesota, the Iron Range, are rural, blue collar and tend to vote Democratic. Unions are well organized in the northeast, and can still flex political muscle. The northwest is more rural and about evenly split in terms of partisan allegiance.

The southeastern part of the state includes the Mayo Clinic in Rochester, an area which was traditionally Republican but has become more competitive. And as Hispanics have moved into southern Minnesota to work for agribusinesses, the southeast has become a swing region. The farm counties in the southwest have been losing residents, but those who remain are, for the most part, very socially and fiscally conservative. 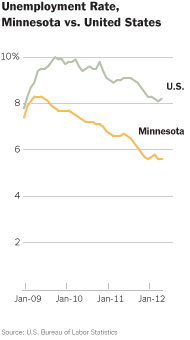 Look to Blue Earth County, anchored by Mankato, for an approximate measure of the final statewide margin between Mr. Obama and Mr. Romney on Nov. 6. Blue Earth, an area with rich farmland that produces soybeans, corn and hogs, has roughly matched the final vote of the state in the past three presidential elections.

Mr. Romney does have a narrow path to victory in Minnesota. The FiveThirtyEight model currently gives him a 7 percent chance of carrying the state. In 2000 and 2004, support for the Democratic Party (known locally as Democratic Farm Labor Party) eroded somewhat among traditional Democratic voters in the Iron Range, an area that tends to be more socially conservative. Unease with environmental and gun control regulations helped Republicans make inroads in northern Minnesota. In 2010, Democrats lost the Eighth District, which covers this area, for the first time since 1946, when Chip Cravaack, a Republican, defeated veteran Representative Jim Oberstar.

At the same time, many Twin Cities suburbs and exurbs have become more Republican, moving the overall balance of the state a few percentage points toward the right.

But the 2012 election cycle might not be the best time for a Republican to try for an upset in Minnesota against an incumbent president. First, Minnesota’s economy is positively robust compared to the rest of the nation. The state’s unemployment rate is 5.6 percent.

Second, the Minnesota Republican Party is essentially in shambles, Mr. Jacobs said. Struggling with financial problems, the party faced eviction from its headquarters. “It’s been kind of a laughingstock for the last year,” Mr. Jacobs said.

In late 2011, the Republican majority leader of the state senate, Amy Koch, resigned after allegations surfaced that she was having an inappropriate relationship with a staff member. And the state’s Republican Party was just fined $33,000 for accepting illegal contributions in 2010.

Lastly, the issues that helped Republicans make inroads in the Iron Range area may have lost their potency. Mr. Oberstar’s loss seems to have energized Democratic activists in the area, Mr. Jacobs said.

But can a Romney-Pawlenty ticket overcome those issues and pull Minnesota into reach?

A survey of likely voters in Minnesota by Public Policy Polling from early June tested several Republican tickets and found that a Romney-Pawlenty matchup was the most popular. But Romney-Pawlenty still trailed Obama-Biden by 11 percentage points.