Financial markets around the world continued to melt down today. The Dow Jones Industrial Average was down 1,000 points at one point this morning (it has since rebounded). Asian and European shares are down even more. Oil has fallen below $40 a barrel.

Here’s what you need to know: Don’t sell.

Let me try that again, with greater emphasis: Do. Not. Sell.

Got it? Good. You can stop reading. The rest of this article is for people who aren’t convinced.

Let me be clear: I have no idea whether stocks are going to keep tumbling or if they’ll quickly rebound. I don’t know what’s causing today’s collapse. (“Fears that China’s economy is slowing dramatically,” as The Wall Street Journal wrote Monday? Sure, but those fears have existed for months.) I don’t think a few days of turmoil are a sign that the U.S. is headed for another recession, but economists are notoriously terrible at predicting recessions.

But the simple fact is that you don’t know any of those things either. Nor does anyone else.

What we do know is that market crashes, however you define them, happen. Since 1950, the S&P 500 has had one-day declines of 3 percent or more nearly 100 times. It’s had two dozen days where it fell by 5 percent or more. Slow-motion crashes, where big declines are spread out over several trading days, are even more common.

But every one of those declines has been followed by a rebound. Sometimes it comes right away. Sometimes it takes weeks or months. But when it comes, it comes quickly. If you wait until the rebound is clearly visible, you’ve already missed the biggest gains.

Imagine two people who each invested $1,000 in the S&P 500 at the beginning of 1980. The first one buys once and never sells. The second one is slightly more cautious: He sells any time the market loses 5 percent in a week, and buys back in once it rebounds 3 percent from wherever it bottoms out. At the end of last week, the first investor’s holdings would be worth $18,635. The second investor would have just $10,613. (For simplicity’s sake, I’m ignoring dividends, fees, taxes and other factors.) 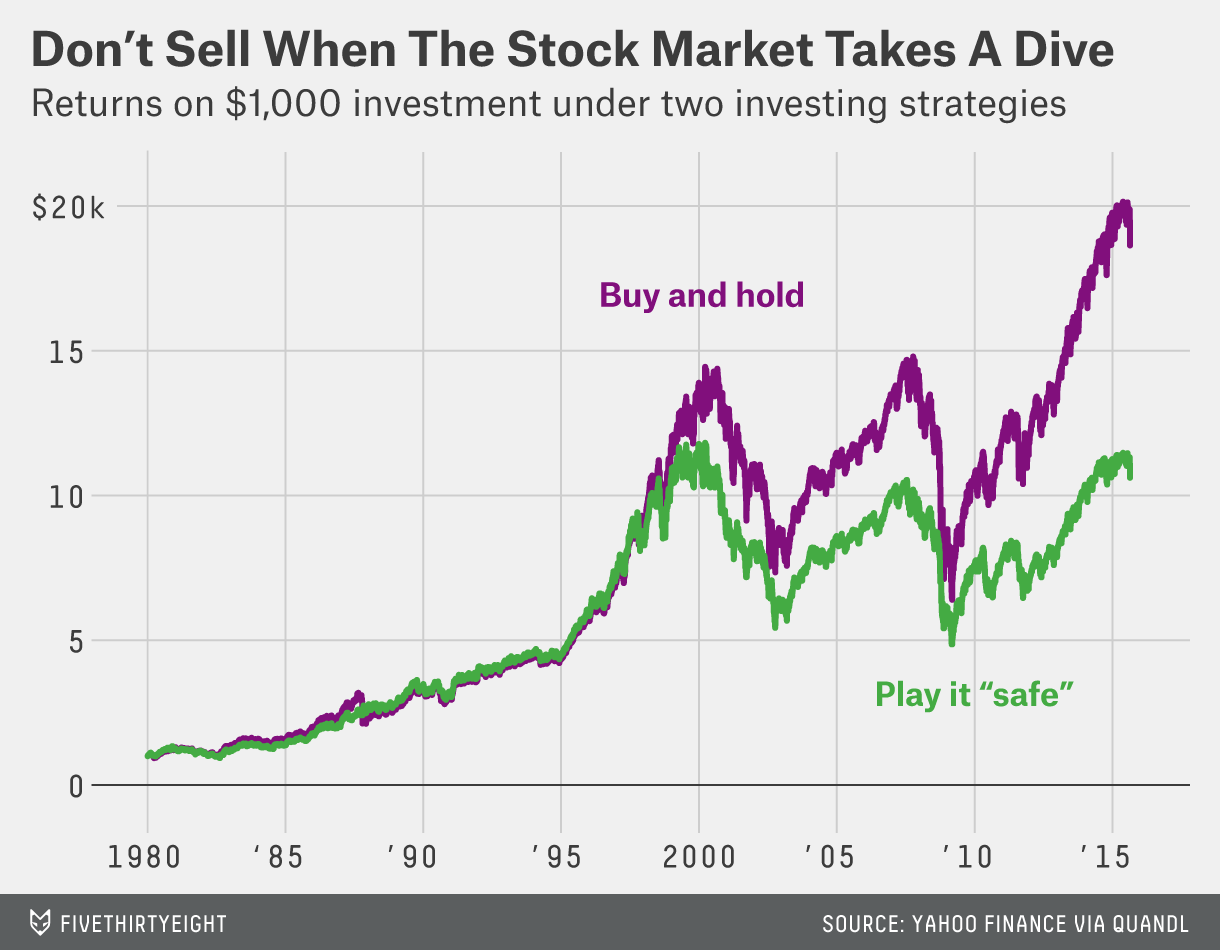 Of course, an omniscient stock trader would have done far better than either of our hypothetical investors. If you could buy low and sell high every time, you’d quickly be worth millions. But decades of economic research have shown that you can’t. No one can. The market is inherently unpredictable.

Instead, for the vast majority of us, investing is — or at least should be — a long-term game. We’re saving for retirement, college or other expenses that are years if not decades in the future. Over that kind of time frame, this week’s market turmoil doesn’t matter. As Ron Lieber advised in The New York Times on Friday, the smartest thing to do is to ignore the day-to-day ups and downs entirely.

But whatever you do, don’t sell.

Read more: “When To Pay Attention To The Stock Market (And When To Ignore It)”