[As Barack Obama spends a week on his first overseas trip, we have a well-timed new addition that we’re excited to share with our readers today. A Washington D.C. native, Renard Sexton works with the United Nations Environment Programme (UNEP) in Geneva, Switzerland and travels throughout the world in that capacity. He is a multi-talented writer and thinker who will bring an internationally-based, on-the-ground perspective to FiveThirtyEight. We’ve asked him to report from his unique vantage what he sees, with stories, statistics and analysis, in the complex way that America and its policies interact with the rest of the world. He’s eager for your feedback and comments as he develops his columns. He’s a good guy, a smart guy, and please enthusiastically welcome him to the team. — Sean]

I spent January of 2008 in northern India, looking at environment and energy issues, and writing about various roles that Indian NGOs have taken on in rural areas to fill in the power vacuum left by poor national governance. Wherever I visited, however, it was not climate change, alternative energy, or water pollution that the various professors, government officials and NGOs wanted to talk about.

It was Obama. It was Hillary. It was McCain and Romney. It was the incredible influence that US foreign and domestic policy has on the rest of the world.

I had just arrived in Delhi on the eve of the Iowa caucuses. When my colleagues and I awoke the following morning, because of the time difference, the final results were just streaming onto CNN – one of only two channels that were clear enough to watch on the hotel television.

On one channel was a live telecast of an India national team test cricket match – as close to a national religion as there is in India – and on the other was Obama’s victory speech in Des Moines. And no one – including the morning porter, whose understanding of English was frighteningly awful – was watching the test cricket match.

My colleague Jerry, a Californian by birth, Virginian by transplant, turned to me and said, “This is history, my friend.”

[Below: The morning commute in New Delhi, India — an hour per kilometer is quite typical. Photo by R. Sexton, Jan 2008] 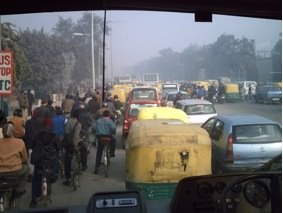 This experience launched a journey of watching US Presidential politics from afar, seeing the intricate, the hilarious, and the unexplainable. I occasionally took it in locally, when spending time in the Washington D.C. area, where I was born, raised, and educated. The rest of the time, I explored from abroad the tale of two fascinating narratives: the ways US politics impact the world, and the way the world impacts US politics.

A word of introduction – I am a young professional, living in Geneva, Switzerland, working for the United Nations Environment Programme, specifically on conflict and peacebuilding issues. I am also a fan, critic, and all around enthusiast of the US political world. My work and wanderlust allow me to travel often, to various parts of the world, and I take with me a critical eye.

This column aims to connect the US political universe to the billions that don’t live in North America. As it turns out, seeing the lives, dreams and prejudices of others teaches you a lot about what those things mean in your home context. I hope to share anecdotes, analysis, news, and ruminations to make FiveThirtyEight’s political coverage even better-rounded then it is already. I plan to do this in a conversational style, in keeping with the accessibility of FiveThirtyEight’s work.

The idea is to cover areas of interest to readers in North America, but also to bring narratives that are often not well known or understood stateside. As we get the ball rolling, I would encourage critical questions and suggestions.

Continuing our narrative of 2008 elections, an important thought to keep in mind is the incredible level of ownership that was felt by many members of the international community in the discourse and outcomes of the US race. It was not simply that there was an interest by decision-makers, who would be directly impacted by a new administration, but instead a palpable recognition that political events in the US make very powerful, international, waves. Indeed, even many regular citizens felt quite a stake in this election. I would be willing to bet that there were as many Obama-Biden stickers and t-shirts in Freetown, Sierra Leone as in Freeport, Maine. 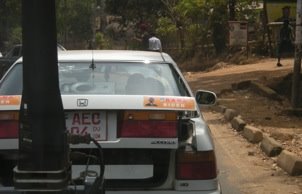 Back in India, there was a keen sense of excitement that a Democratic president would be very positive for the Indian economy, and status in the world. Historically, Republican administrations, as seen in the recent past, have tended to favor Pakistan vis-à-vis India, while Democratic presidencies have often been to India’s advantage. This has no small impact on regional relations, and the strength of each country’s global bargaining positions.

One well-respected university dean in north India put it this way: “I wish that we could vote for President. In fact, really, the world should all vote for US president. It’s really not fair.”

A common misconception, however, perpetuated by the images of then Sen. Obama’s summer international tour and its grand reception in several European cities, is that the international community was universally and fanatically supportive of his candidacy. The truth is actually quite different.

Most moderates and liberals (using the American ideology terms) in Europe strongly favored Mdm. Clinton in the Democratic primary, and were sometimes quite slow to warm to Obama. A number of conservatives across Europe, and even some moderates in various countries were actually quite hostile to Obama’s candidacy. They preferred Sen. McCain’s harder stance on Russia, continued trade liberalization, and continued expansion of US/NATO military operations to counter so-called rogue regimes.

As well, many recipients of USAID funding for HIV/AIDS, transparency, and education in Africa and Asia were sad to see Pres. Bush leave office. He was responsible for the robust funding increases in HIV/AIDS work, and on this issue many NGOs, underfunded governments and local people were pleased with Bush’s emphasis. Some people have worried that a Democratic approach might spread funds too thinly in order to finance a larger portfolio of projects. The Bush administration’s more narrowly focused aid approach dealt more vigorously with a fewer number of core issues, which was successful in some areas.

The bottom line is that people in any country, in any region, have a vested interest in the politics of the US. And contrary to what some might think, events, opinions and realities around the world play a key role in the way US politics play out. Whether linked to economics in a globalized world, culture in the internet age, or geopolitical crises that test US military and diplomatic strength, these linkages are intimate and influential. Exploring these outside the sometimes bubble-like American context is quite productive for anyone who wants to better understand the issues at play, and their consequences.

Fast forward ten months to the middle of November – two weeks after the election. I am in Germany on business, working on various UN planning documents with partners in Berlin. Curious about the local reaction to the election that gripped the city just a few months earlier, I asked a few people what they thought about the results. Several people told me – in embarrassingly well-spoken English – that they were indeed pleased with the change in leadership, and impressed with the rapid change in direction that had taken place in the US. Some mentioned critiques on various platform pieces of the two candidates, often citing Iraq or climate change. Many said they had attended the summer rally that had pushed Germany to the edge of “Obamamania”, and said they strongly supported his candidacy.

However, particularly among the young, a certain realism had already set in, the honeymoon quickly over in the midst of a badly struggling German economy.

“I don’t care much about Obama anymore,” one university student told me, “I just want to have a job when I finish studying.” He paused to think, and then solemnly asked, “Are there jobs in America?”