Scoring is up at the World Cup, but it would be even higher if more players could shoot straight.

Teams have taken 221 shots on direct free kicks or off shots set up by direct free kicks. TruMedia, a soccer stats supplier to ESPN, has developed a model, based on club soccer data from Opta, to predict the probability of any shot going in, according to its location and other variables. That model predicted that those 221 shots should have yielded 21 goals. But just 11 have gone in the net. 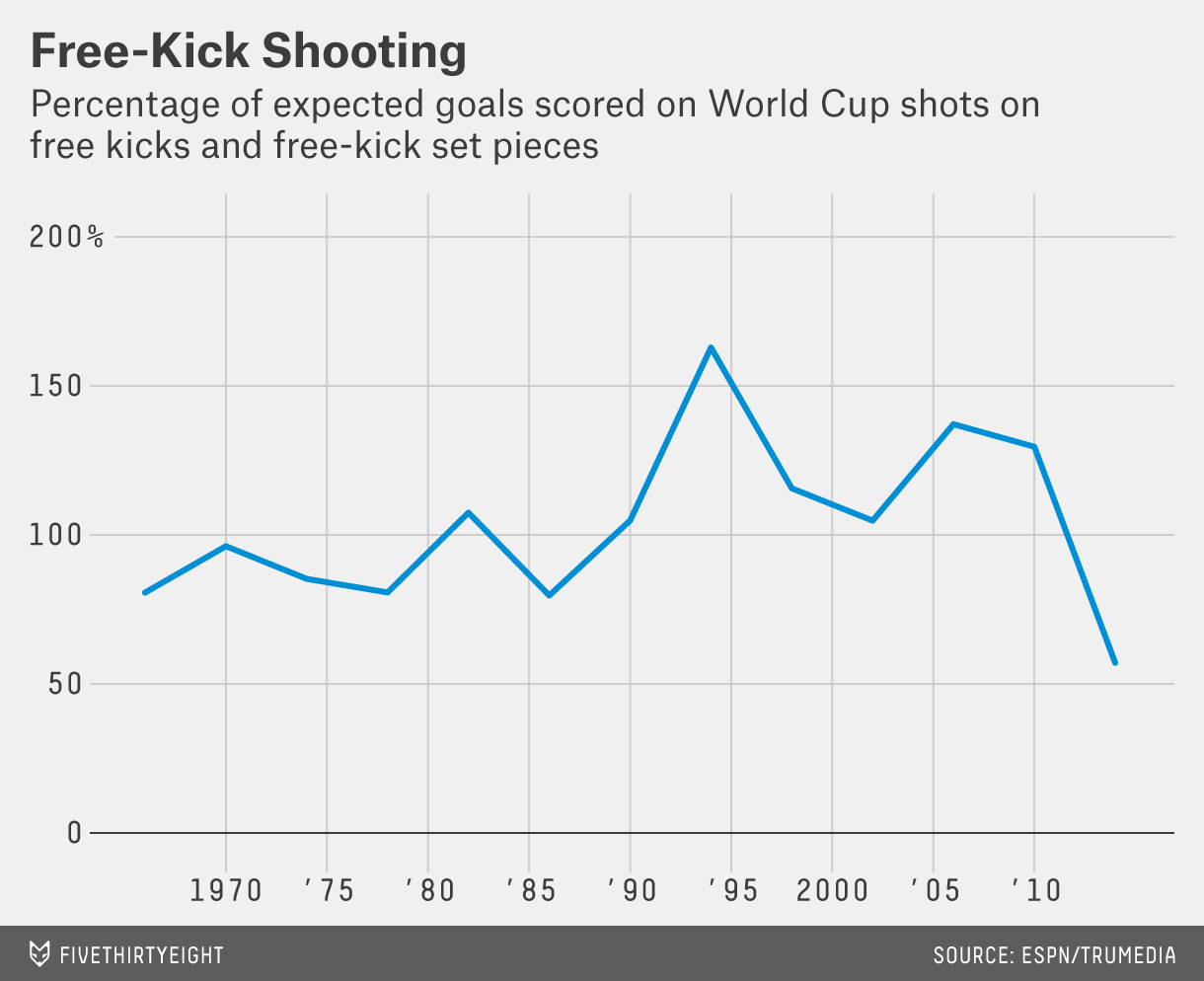 Or take long-distance shooting. In the World Cup’s first 62 matches, players have let shots fly when they were 20 yards away from the goal or farther 817 times. TruMedia predicted the ball would go in 31 times. But it has gone in just 17 times. (There is some overlap between these categories, because some shots off free kicks are from long-range.) 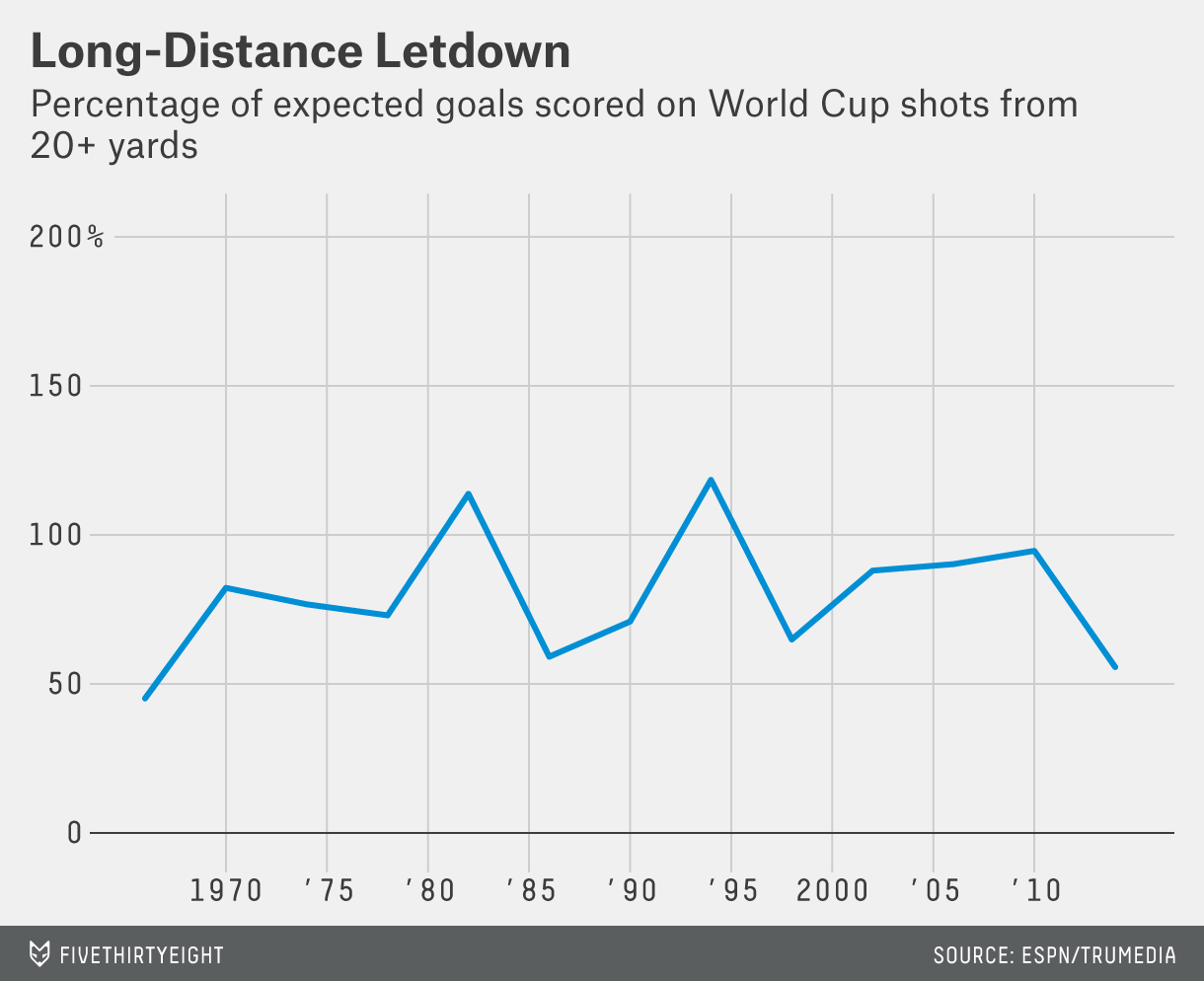 To check who was missing the shots, I cross-referenced the World Cup shooters with shooters from the top five European leagues — the top divisions in England, France, Germany, Italy and Spain — in the most recent club season.

Not surprisingly, players who didn’t take any shots of a certain type in those club leagues — either because they don’t play in them or don’t get the chance to take those shots — have been the source of many of the misfires in the World Cup. But even the players who shoot often on free kicks or from long-range in Europe have been firing blanks more often in Brazil.

The effect is particularly pronounced on shots from 20 yards or more. Players who took no shots in the big five leagues in Europe could have expected to score 9.5 goals on their World Cup kicks off long shots. They’ve scored three goals — or about a third as much as we’d expect on their shots. The European long-range shooters have been better, but not great — scoring about two-thirds as many goals as we’d expect. Two players — the impossible Lionel Messi, and the merely improbable James Rodriguez, who plays club soccer for Monaco and national soccer for Colombia — account for a very large chunk of long-range outperformance in Brazil.

On shots created through free kicks, the players who didn’t take any such shots in the top European leagues have been dreadful — scoring four goals for every 10 expected. The European club shooters again have been better but still disappointing, scoring at just 79 percent of expectations.

The errant World Cup shooting, then, is partly a result of shooters without top club experience taking lots of shots, and of shooters with top-level experience underpeforming. That’s especially disappointing because the overlap between the top five European leagues and the World Cup is a very impressive set of players, who as a group scored 8 percent more goals on free kicks than expected in club play last season and 11 percent more goals than expected on long-range shots.

1. World Cup goalkeeping is very good. There are more than three times as many teams in the top five European leagues as there are in the World Cup. World Cup teams need to field 10 outfield players, but they need just one high-quality goalkeeper.

2. It’s easier to organize a defense made up of players who don’t play club soccer together than it is to organize an offense. Defensive principles transfer more readily and require less training, so World Cup defenses have the advantage on these plays.

3. This is a bit of a fluke, because factors Nos. 1 and 2 apply at every World Cup, yet this has been the worst shooting performance on these kinds of shots since 1966 — as far back as Opta has tracked the stats.