On Tuesday, Brazil and Germany kick off the World Cup semifinals, where there are no real party-crashers to be found. Including A Seleção and Die Mannschaft, four of the top five teams in the pre-Cup Elo ratings are still active in the tournament. Sorry, Spain. 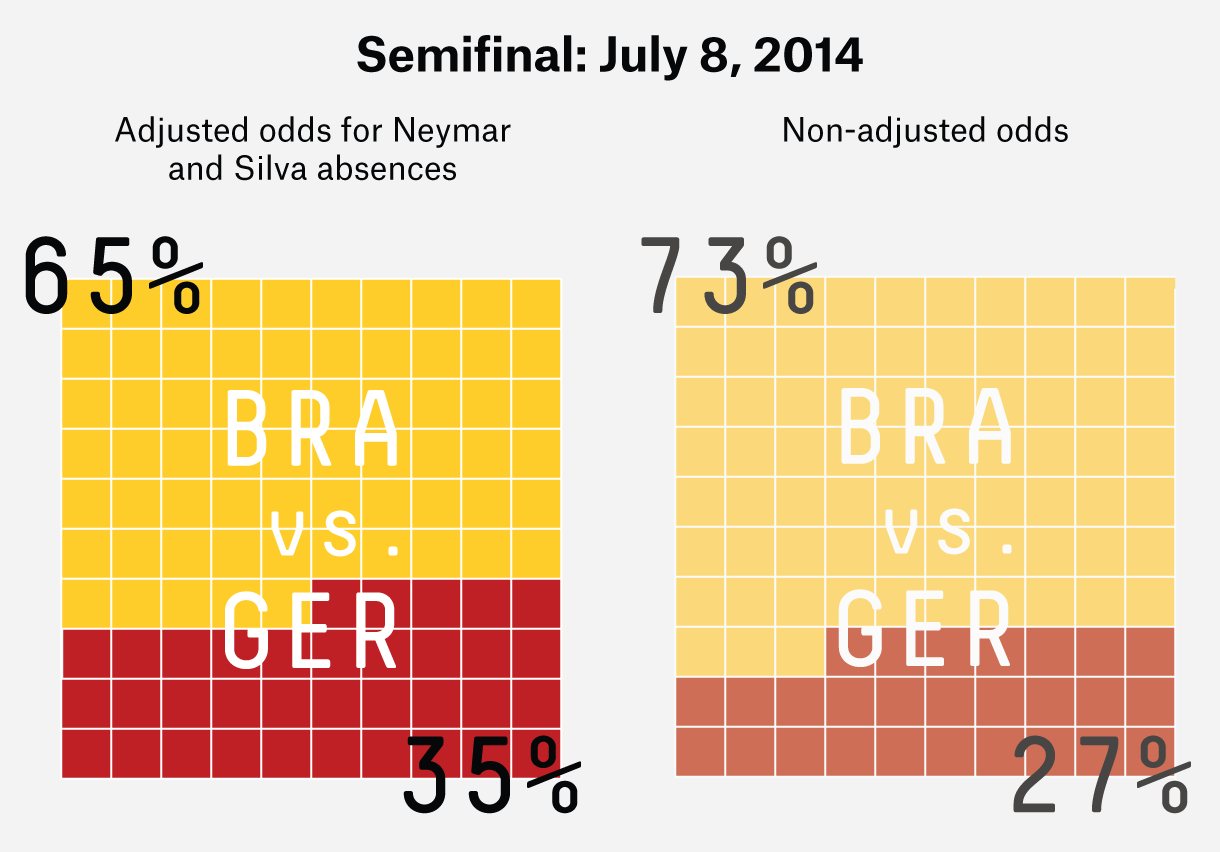 With such evenly matched squads — and the ever-present specter of randomness — barring a huge blowout, the final four games of the World Cup are unlikely to provide much of a referendum on which side is truly the world’s best. But at the same time, the absence of a longshot entry boosts the chances that one of the remaining four teams is in fact the “true” best team in the field. More important, it also increases the odds that we’ll see a pair of exciting, close matches at the doorstep of the World Cup final.

Brazil was the World Cup favorite before the tournament began, and its championship chances still rank first according to the FiveThirtyEight model. Our official projections even say there’s a 73 percent probability that Brazil will beat Germany Tuesday and advance to the final. But those numbers don’t know that the gifted Brazilian striker Neymar will miss the rest of the tournament with a broken vertebra, an injury he sustained against Colombia in the quarterfinals. If we account for his absence (and that of his teammate Thiago Silva, who racked up two yellow cards and must sit out Tuesday’s match), Brazil’s chances of beating Germany drop to somewhere near 65 percent, numbers fueled in large part simply by the match’s location on Brazilian soil.

To put it another way: If this game were staged at a neutral site, it would probably be close to a toss-up between Germany and Brazil-sans-Neymar-and-Silva.

To a certain extent, that’s because Brazil has been far from dominant during its run to the semis. First, Mexico played it to a draw in the group phase, then it squeaked by Chile (on penalties) and Colombia in its knockout matches. Over the past month, the gap between Brazil’s Soccer Power Index (SPI) rating and that of second-ranked Argentina has been nearly sliced in half, despite the Argentines playing largely to expectation. That Brazil is still rated first in SPI owes as much to our prior beliefs about its strength as to anything it’s actually accomplished in the tournament.

And Germany is a force to be reckoned with. While they haven’t consistently overwhelmed opponents with their ballyhooed offensive prowess (aside from netting six goals in their first two matches — including four against Portugal), the Germans have answered many of the defensive questions that surrounded them before the tournament began, keeping clean sheets against Portugal, the United States and France. And they’ll need to be staunch at that end of the pitch against a Brazilian team that still has plenty of firepower, even without Neymar.

One major tactical storyline to keep an eye on will be the philosophical chess between the pass-heavy, possession-focused Germans and a Brazilian side still keenly interested in dribbling through the defense. Among semifinalist teams, only Argentina has maintained ball possession more often than Germany, and nobody makes more short passes per game than the Germans. Germany’s approach is to patiently work the ball into the opponent’s territory, passing it around until its players can create a high-percentage scoring opportunity. Brazil, on the other hand, loves to dribble the ball and create chances by taking on defenders in one-on-one situations.

A compelling wrinkle will be how this changes without Neymar, Brazil’s most active dribbler. It’s likely that Hulk and Oscar will be asked to pick up some of the slack, but it will be interesting to see how Brazil adjusts its overall style in the absence of its most prolific offensive playmaker.

On balance, Brazil should still be favored — if only because of home-field advantage. In close matches like this, officiating can play a sizable role, and there’s a good amount of research suggesting home teams get favorable treatment from the referees (perhaps more so in soccer than in other sports). In terms of ability, though, these two teams are very close to evenly matched.

Brazil and Germany have had good off-the-pitch relations for decades, particularly in the economic sphere. The Observatory of Economic Complexity has information on trade between the two countries that dates back to 1962, and shows that the two nations have been exchanging mostly the same stuff the whole time. Coffee, iron and soybeans were among the top Brazilian exports to Germany both in 1962 and in 2012.

Similarly, machinery remains the top category of German exports to Brazil, although the specific products have changed over time. Metalworking and textile machinery reigned supreme in 1962, while cars and car parts took the largest shares of exports in 2012.

But what’s most notable is how much these countries’ bilateral trade has grown. In 1962, Brazilian exports to Germany totaled $173 million and German exports to Brazil totaled $161 million. Trade in both directions surpassed the $1 billion mark in the 1970s, and was up to $11 billion in both directions in 2010, when both countries agreed to further strengthen their economic ties. Exports headed toward Germany have nearly doubled since, with $20 billion worth flowing out of Brazil in 2012. But it looks like Germany got the sweeter end of the deal, with Brazil buying $28 billion of its products the same year.