There’s really only one competitive match on the docket Wednesday, but it’s an intriguing one. 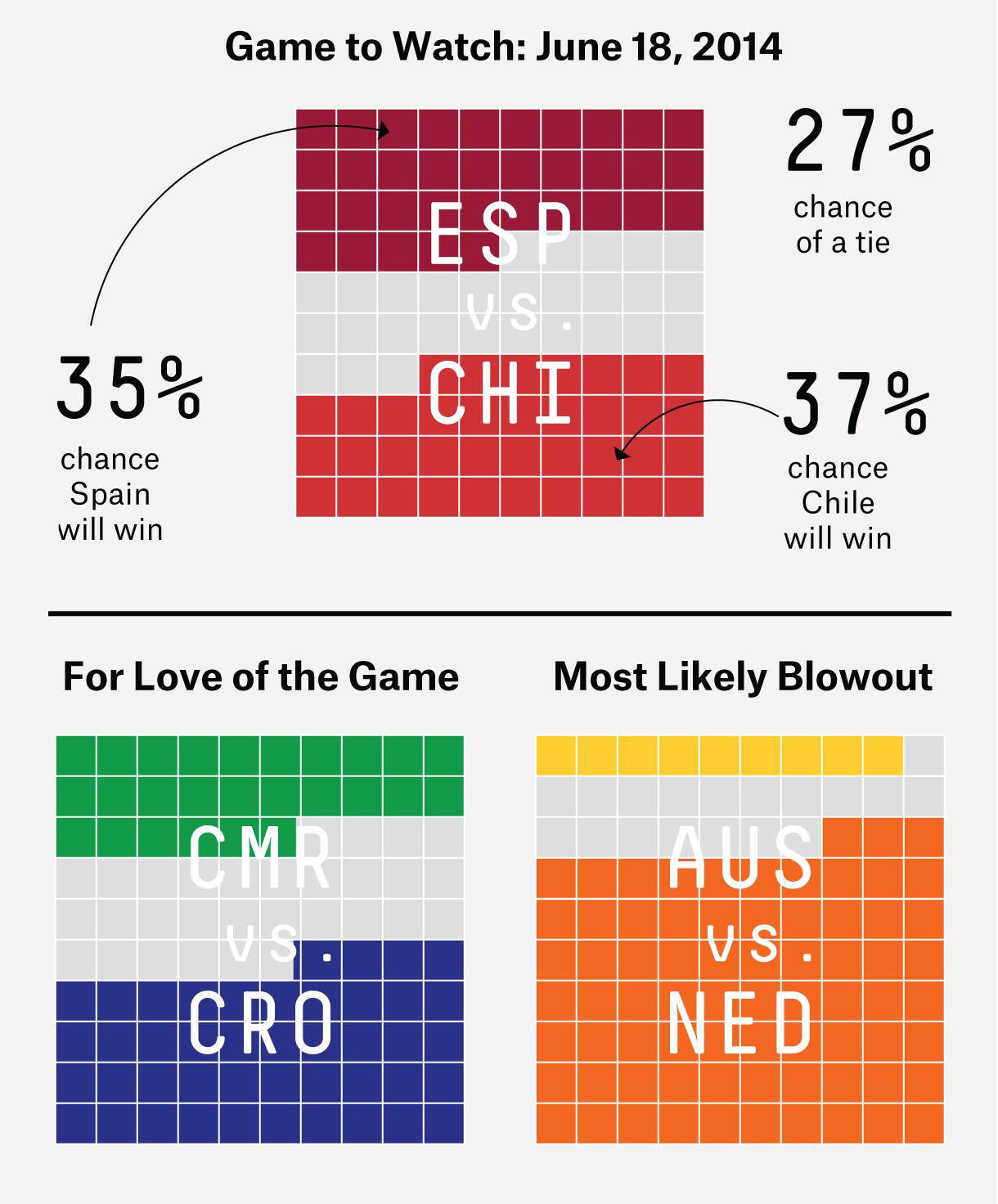 The best matchup of the day — by far — is La Furia Roja versus La Roja, Spain against Chile, a clash that could have huge implications for the advancement scenarios of Group B. Here’s the big one: If Chile wins and the Netherlands wins or draws against Australia (a 91.5 percent proposition, according to the FiveThirtyEight prediction model), Spain will be eliminated and fail to advance to the knockout round, a shocking fate for the reigning champs and one of the leading pre-tournament favorites.

How did we get here? Chile took care of business in its opener against Australia, beating the Socceroos 3-1 behind a great game from Alexis Sanchez, the best Chilean player according to our Soccer Power Index (SPI) player ratings. Meanwhile, Spain … um, how can we put this? Spain could have had a better second half against the Netherlands. In fact, after being slaughtered by the Dutch, Vicente del Bosque’s side dropped from third in the SPI rankings on Friday morning to eighth on Wednesday — one spot behind Chile.

Spain came into the tournament with the best SPI defensive rating of any team in the world, but it must get a vastly improved performance out of goalkeeper Iker Casillas and its back line if it’s to beat Chile, SPI’s fifth-best team on offense. Spain’s World Cup future could depend on it.

The next-closest match figures to be Cameroon versus Croatia, in what our numbers predict will be a low-scoring affair. Croatia is coming off a defeat against Brazil that was equal measures frustrating and promising; it conceded three goals, including two to Neymar (one coming after a somewhat questionable penalty call), but also held a lead for 18 minutes and was able to generate chances at the other end of the pitch. If Croatia beats Cameroon on Wednesday, advancement is still a possibility (although Mexico’s tie with Brazil on Tuesday didn’t help the Croatian cause). Meanwhile, Cameroon hung tough against Mexico in its first outing, and a 1-0 loss against a top-25 team wasn’t a bad debut for a side SPI considers one of the worst in the World Cup field. But it’s not going to get much easier for the Indomitable Lions — Croatia is a solid favorite against them here, and, of course, Brazil waits in the wings.

Brazil isn’t going to lose a lot of sleep over that one, nor is the heavily favored Netherlands going to fret about Wednesday’s match against Australia. Our model gives the Dutch a 73.6 percent probability of winning, and in concert with Chile’s chances of a win or draw against Spain, that means there’s a 47.5 percent chance the Netherlands cruises into the knockout stage before the day is done.

Brazil entered Tuesday 6-0-0 all-time in World Cup play against CONCACAF teams. In fact, Costa Rica was the only CONCACAF side ever to score against Brazil in the World Cup (in the 2002 group stage). And Brazil has had particular success against Mexico, winning all three of their previous World Cup matches for a total goal margin of 11-0.

Although Mexico didn’t score on Tuesday, El Tri became the first team from outside UEFA/CONMEBOL to take a point from Brazil in the World Cup.

Based on the statistics, Mexico’s going scoreless doesn’t appear all that surprising. Mexico had four shots in the first half, all from outside the penalty area, and none was on target. Mexico managed just four touches in the attacking penalty area in the first half; Brazil had 13. Mexico ended the match with an average shot distance of 28.5 yards, the second-longest in a match thus far.

Much more surprising was Brazil’s failure to find the back of the net. According to SPI, the odds of Mexico holding Brazil scoreless were just 4.8 percent. The star of the match was Mexican goalkeeper Guillermo Ochoa, who has led or tied for the lead in saves in France’s Ligue 1 each of the last three seasons playing for AC Ajaccio. Ochoa ended the match with six saves, tied for the most by a Mexican goalkeeper in any World Cup since 1966.

Perhaps Ochoa’s best save was a diving stop of a Neymar header in the 26th minute. Neymar was the driving force for Brazil in the match, leading the team in shots (three) and shots on target (two), as well as chances created (four). Yet it was all for naught.

By defying the odds and picking up a precious point, Mexico’s chances of advancing to the knockout round increased from 58.7 percent to 80.2 percent. — Jacob Nitzberg, statistics analyst, ESPN

Let’s play a word association game. What country do you think of when you hear about kangaroos? Vegemite? “Mate”? What about tulips? Windmills? Coffee shops?

Yes, Australia and the Netherlands both have pretty distinct international identities. But does the two countries’ relationship confirm these stereotypes? OECD data provides some interesting insights. The largest single export from Australia to the Netherlands in 2011 was rapeseed (used for animal feed, vegetable oil and biodiesel) at 24 percent, followed by coal at 22 percent — in case the Dutch get inspired to throw some shrimp on the barbie. The Netherlands’ main exports to Australia were machines and chemical products, but there was also $258 million in tobacco exports and $225 million in flower, bulb, seed and live plant exports in 2011, so it looks like the Dutch are learning from the Aussies, as well. — Hayley Munguia