It was a tough call Sunday with great games across the board, but ultimately it’s Argentina — the second-ranked team in our Soccer Power Index (SPI) — that we want to see play. 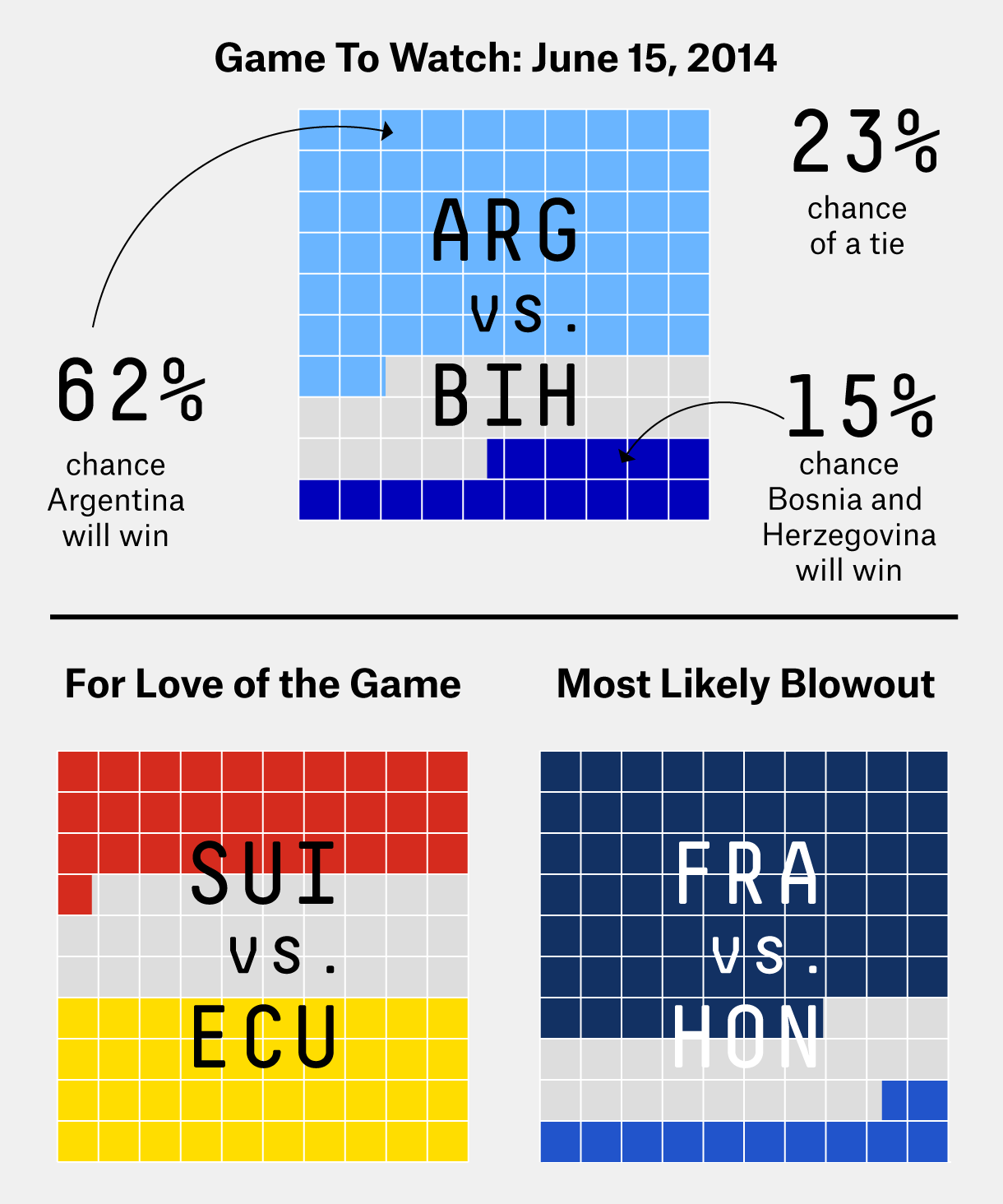 See our World Cup interactive for the latest probabilities.

Argentina has one of the most storied World Cup histories, winning the championship in 1978 and 1986 (the latter after Diego Maradona’s infamous quarterfinals goal), but then failing to find that level of international success ever since.

This year might be different. After the host and favorite Brazil, Argentina has the greatest chance of winning the tournament at 13 percent. Its opponent on Sunday, Bosnia-Herzegovina, has a less than 1 percent chance of being this year’s champion. Their matchup has the Argentines favored to win at 62 percent compared to the Bosnians’ 15 percent — much of which has to do with Argentina’s strong offense.

The attacking trio of Lionel Messi, Gonzalo Higuain and Sergio Aguero is one of the strongest in the tournament, with an SPI offense score of 2.9 (that means we would expect Argentina to score 2.9 goals against an average team), behind only Brazil and Germany. Still, Bosnia’s offense is strong, too, with an SPI offense score of 2.3, so goals may abound in Sunday’s game.

To see who’s more likely to find the back of the net, we looked at each team’s three leading scorers since 2011 and how they’ve been performing at their respective clubs in the run-up to the World Cup (some leagues keep spotty game data; we pulled data from a broad set of league games that had the most extensive statistics — the trends are clear).

The projected average goals for each team in Sunday’s matchup are 2.0 for Argentina and 0.9 for Bosnia. And it’s pretty clear how much more dominant Argentina’s three best forwards are compared to Bosnia’s best three: Together, Messi, Aguero and Higuain are better at passing, shots on target, “take ons” (as opposed to passing in a one-on-one situation) and goals per game. Even though Bosnia’s Edin Dzeko scores a fair bit for his club team, Manchester City, his broken-down stats don’t seem very impressive.

Messi, on the other hand, sweeps the table in almost every category (except goals per shot). And that’s a big reason why Argentina versus Bosnia is our game to watch — because when we say we want to watch Argentina play, what we really mean is that we want to watch Messi play.

Led by Andrea Pirlo, Italy’s 35-year old midfield Methuselah, the Azzurri completed an astonishing 92.2 percent of their passes in Saturday’s 2-1 win against England, the highest by any team in a World Cup match since 1966 (the start of Stats & Info’s data set). Italy’s experience and efficiency stood in stark contrast to an England side that was wasteful in attack.

The final third actually belonged to the English — at least in volume — especially after Mario Balotelli gave Italy the lead in the 50th minute. England had a 192-117 advantage on touches in the attacking third, but struggled to create chances by passing into the penalty area (two chances created off 8-of-37 passing). One goal on 18 total shots wasn’t enough for England, with Wayne Rooney’s 0-for-3 shooting performance bringing his career drought to 25 World Cup shots without a goal.

The most glaring English inefficiency was their reliance on the wings to generate offense while failing to deliver quality crosses. England connected on one of 25 crosses (4 percent) in the match, its lowest cross completion percentage in a World Cup match in 44 years.

The Italians opted for quality in their attacking-third approach, especially in the match’s final 60 minutes. Over the last two-thirds of the match, the veteran Italian midfield picked apart the English back line. Italy completed eight of 14 passes into the box, creating five chances and a game-winning assist on Balotelli’s 50th-minute header. Pirlo, Claudio Marchisio and Daniele de Rossi (16 combined World Cup games entering Saturday) were a combined 5-for-6 in that span. — John Parolin, senior stats analyst, ESPN

No matter how small the probability, there’s a chance that Argentinian players could have Bosnian soles. Tanned horse and cow hides are the biggest single import from Bosnia-Herzegovina to Argentina. Although, they’re only worth $6 million dollars per year.

The data, taken from the BACI International Database of trade, shows another surprising reliance between two countries in another of Sunday’s matchups: 28 percent of all French imports to Honduras is packaged medicine (another 4 percent is perfumes, and 3 percent is beauty products).

Does Switzerland live up to the assumption that it’s all about the chocolate? Kind of: 22 percent of all exports from Ecuador to Switzerland is cocoa beans, worth a total $34 million. Swiss footballers’ WAGs may also be offered jewelry made of Ecuadorian gold (which makes up 41 percent of all Swiss imports from the South American country and is worth $64 million annually) or one of the thousands of bunches of Ecuadorian cut flowers imported each year (worth $17 million).

What about Swiss exports to Ecuador? After chemical products and machinery are Swiss watches, of course, worth $5 million in 2011 alone. — Mona Chalabi