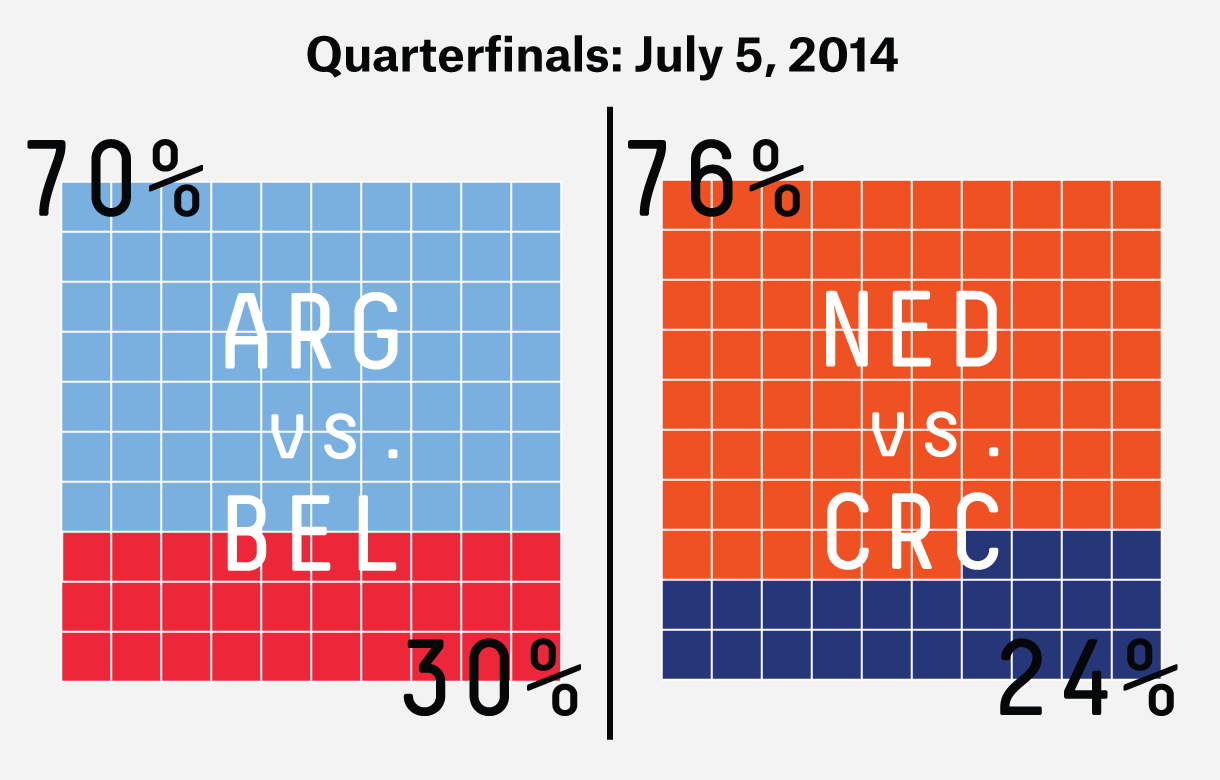 The winners of these two matches will play each other on July 9 at 4 p.m. EDT. See our World Cup predictions for the latest probabilities.

The second- and third-lowest-scoring teams to make the quarterfinals of this World Cup square off against each other in Saturday’s early game (Belgium, with six goals, vs. Argentina, with seven), and then the lowest-scoring team (Costa Rica, with five goals) faces the highest-scoring side (the Netherlands, which has scored 12).

Since Argentina ignominiously exited the 2010 World Cup with a second consecutive quarterfinal loss to Germany, little Lionel Messi has been dominating the world of soccer like nothing we’ve seen in modern times.

After scoring only one goal in both his previous World Cup tournaments combined, this year he’s taken the tournament by storm, scoring four goals (including a stoppage-time game-winner against Iran) in his first three matches, and recording the game-winning assist with just minutes remaining in the fourth.

Stoking questions about whether it relies too much on Messi, however, the rest of his team has been awful on offense; Argentina’s other players have managed to put the same number of balls into their opponents’ nets (one) as those opponents have themselves (Bosnia’s own goal). Argentina’s shooting breaks down like so:

Thus — despite having Messi, and despite Messi playing brilliantly — Argentina has only scored on 7.5 percent of its shot attempts, second-worst among quarterfinalists.

Belgium, on the other hand, has seen six different players score. But that’s only six goals; even though Belgium has taken a tournament-leading 21 shots per game, the Red Devils have scored on only 7.2 percent of those shots, the worst of all quarterfinalists.

Belgium has largely gotten by on excellent goalkeeping, with Thibaut Courtois allowing only two goals despite facing 13 shots on goal worth 4.84 expected goals (using ESPN/TruMedia’s Expected Goals model). His .22 “goals allowed below average” (GABA) per shot is the highest of remaining goalies (higher is better).

Another team with good goalkeeping so far is Costa Rica, whose Keylor Navas has saved 14 of 16 shots on goal, with an average GABA of .21 per shot, good for second behind Courtois.

Neither Costa Rica nor the Netherlands are what you’d call possession teams: Despite their impressive run, the Netherlands has held the ball just 44 percent of the time, and Costa Rica has held it 42 percent (the only other quarterfinalist with less than 50 percent possession was Colombia, with 46 percent). The flip side of playing this way is that these two teams also lead quarterfinalists in average pass distance (21.7 and 20.8 yards, respectively).

But for the most part, Costa Rica seems badly overmatched. While they’ve shot a respectable 14.3 percent, that’s mostly because they’ve been unable to get shots at all — they’ve taken about nine shots per game, averaging only three on goal. Both those figures are by far the lowest of any remaining squad.

The Netherlands, on the other hand, had one the most impressive runs into the quarterfinals. The Dutch faced the most difficult route (their opponents had an average Soccer Power Index rating of 80.0), but so far have the second-highest goal differential at +8.

In trying to find what, aside from good fortune and good goalkeeping, has driven Costa Rica’s gritty run (it’s scraped by against the second-hardest schedule), just about the only thing I could come up with was evidence of how well it’s run the offside trap. Costa Rica has drawn an enormous number of offsides calls: It’s pulled its opponents offsides 28 times (the next-most among quarterfinalists was 12, by Germany).

In the first competitive match between France and Germany since the semifinals of the 1986 World Cup, Germany took the lead early with a headed goal by defender Mats Hummels. It was Hummels’s second goal of the World Cup, making him the first defender to score twice in this year’s tournament (he would get company later in the day). Both of Hummels’s goals have been headers, and both have been by assisted by Toni Kroos.

For Germany, headers are nothing new: Over the past 50 years (as far back as ESPN Stats & Info’s data set goes), Germany has scored 37 headed goals in World Cup play, nearly twice as many as any other country (Italy has 19). Scoring first — by head or foot — has been Germany’s recipe for success in the World Cup, especially as of late. The Germans are 21-0-2 in their last 23 World Cup matches when scoring first, their last loss coming in the 1994 quarterfinals to Bulgaria.

France, on the other hand, trailed for the first time at this year’s tournament, and still has never won in a World Cup match when trailing at halftime, losing all 11 times. Les Bleus made efforts to equalize, ending up with more shots (13) than Germany (8), and more chances created (10 to 7). But it was all for naught.

In Friday’s second match, Brazil opened the scoring in the seventh minute, its fastest goal of the tournament. The goal came from a Neymar corner kick, his first assist of the tournament. It was Thiago Silva’s first career World Cup goal, and it was Brazil’s third goal from a corner, tied with France and Germany for the most in this World Cup.

Brazil was in control for the remainder of the first half, completing seven of 15 passes into the attacking penalty area and creating seven total chances. Neymar created four chances, including the assist; Colombia, as a team, created two in the first half.

Brazil extended its lead to 2-0 on defender David Luiz’s 34-yard free kick, the second-longest goal of the tournament. Luiz failed to score in his first 39 career international appearances, but he has found the back of the net in his last two. Brazil has now taken a two-goal lead in a World Cup match 49 times, and has won all 49.

The breakout star in the tournament so far, Colombia’s James Rodriguez, converted a penalty to give his side hope; he scored in all five of his games in the tournament. It was his sixth goal, giving him a two-goal lead in the race for the Golden Boot. Colombia scored five goals combined in its last two World Cup appearances (1994 and 1998).

Brazil and Germany’s semifinal meeting on Tuesday will, incredibly, mark only the second time these two countries have met at the World Cup. The other was the 2002 final, won by Brazil 2-0. — Jacob Nitzberg, senior statistics analyst, ESPN

The Netherlands and Costa Rica have been friends for a while. In fact, the Dutch were a big source of aid to the Costa Ricans until recently, when the latter ascended to middle-income status. The relationship has gradually shifted to focus more on trade and economic cooperation, but it’s still worth looking at the aid the Netherlands provided over the years.

AidData reports that the Dutch sent about $362.5 million Costa Rica’s way between 1978 and 2010. The bulk allocation changed with time, and in the 1980s seemed to focus on industry growth, with $1 million going toward agriculture in 1981, $31 million toward imports to Costa Rica in 1984 and $7 million toward forestry in 1989. The ‘90s began a slow transition, with $17 million spent on multisector industry growth in 1994, $22 million on debt alleviation in 1996 and $21 million on general environmental protection in 1997. With this final pivot, it looks like Costa Rica found its stride — environmental protection continued to be the focus of Dutch aid through 2006, with a final peak of $17 million. Since then, Costa Rica’s tourism industry has boomed, and Dutch aid has all but completely ended.