Friday’s games mark the start of the quarterfinals and feature a UEFA vs. UEFA matchup in the morning followed by a CONMEBOL vs. CONMEBOL game in the afternoon. In the first match of the day, Germany has a 52.5 percent chance of defeating France and advancing to the semifinals, according to FiveThirtyEight’s World Cup predictions. In the second, however, Brazil is heavily favored to defeat Colombia (72 percent to 28 percent) and play the winner of Germany vs. France in the semifinal next week. 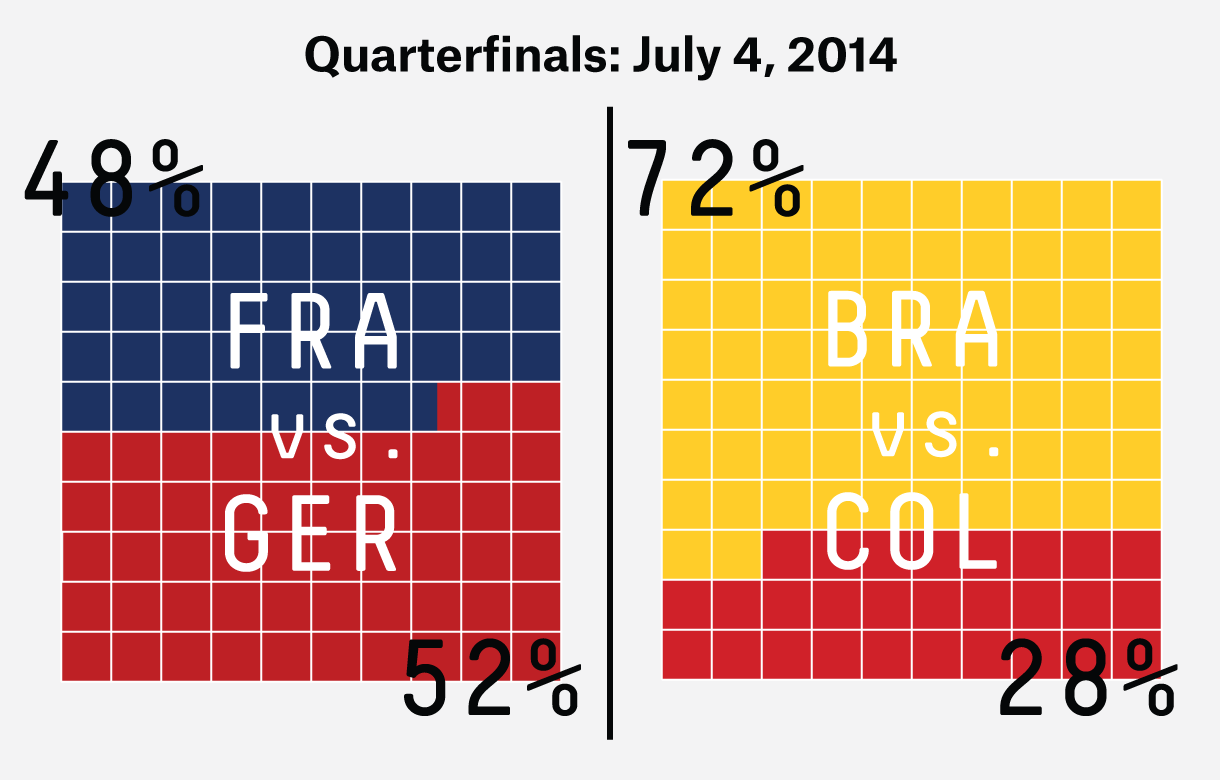 All eight teams still in the tournament won their respective groups, so there are no true underdogs left. But if we go back to the beginning, Brazil and Germany both had very good chances of reaching this stage of the knockout rounds (80 percent and 68 percent) compared to Colombia and France (46 percent and 45 percent).

France and Germany are old foes, having faced each other 25 times since 1930 (prior to 1990, Germany competed as West Germany). In those games France has been victorious 11 times compared to Germany’s eight. However, almost all of these games were friendlies. The last time these two teams met competitively was in the 1986 World Cup semifinals, and Germany edged France 2-0. ESPN’s Soccer Power Index rates France vs. Germany as the most evenly matched of all the quarterfinal games.

Brazil vs. Colombia, on the other hand, is supposed to be anything but even. Strangely, these teams have also met 25 times, and Colombia has managed to win only twice. A Seleção have slaughtered Los Cafeteros on more than one occasion, 9-0 in 1959 and 6-2 in 1969, but this is a different Colombia team. Their last meeting with Brazil, a friendly in the U.S. in 2012, ended in a 1-1 draw.

Brazil trumps Colombia in overall and offensive SPI ratings (90.6 and 3.1 to 89.4 and 2.6) but Colombia’s defense is slightly better, with an SPI rating of 0.4 average goals allowed to Brazil’s 0.5 (lower defensive scores are better). Brazil’s defense has something to worry about in James Rodriguez, this World Cup’s breakout star for Colombia, who has tallied five goals — the most of any player so far — including this beautiful chest-to-volley on the turn against Uruguay:

But Brazil’s Neymar (and Argentina’s Lionel Messi and Germany’s Thomas Muller) are only one goal behind Rodriguez, so if Brazil clinches a win in this clash of the golden boys, Rodriguez may be out of the race for this year’s golden boot.

France and Germany are neighbors, and each has international power and its own distinct culture — berets and baguettes vs. lederhosen and bratwurst. So given the ease of travel between the countries, it’s not surprising that there’s a lot of cross-tourism. According to the French Ministry of Handicrafts, Trade and Tourism, there were about 6.3 million overnight stays in France from German tourists in 2012. Conversely, the German National Tourist Board reported that there were roughly 3.1 million, or half as many, overnight stays in Germany from French tourists in the same year. When adjusted for each country’s total population at the time, this means that about 8 percent of Germany’s 80.4 million people stayed overnight in France at least once in 2012, while about 5 percent of France’s 65.7 million people stayed overnight in Germany. They may not be the best of friends, but it looks like the old enemies have at least upgraded to a friendly rivalry — at least as far as tourism goes. — Hayley Munguia

CORRECTION (July 4, 10:57 a.m.): An earlier version of this post had the incorrect year of the last competitive meeting between France and Germany. While the two teams did face off in 1982, they also met in the 1986 World Cup semifinals.