As if you needed any data to tell you why you should watch Thursday’s U.S. vs. Germany game (and the Portugal vs. Ghana match, if you’ve got a split-screen setup), but we’re going to give it to you anyway. 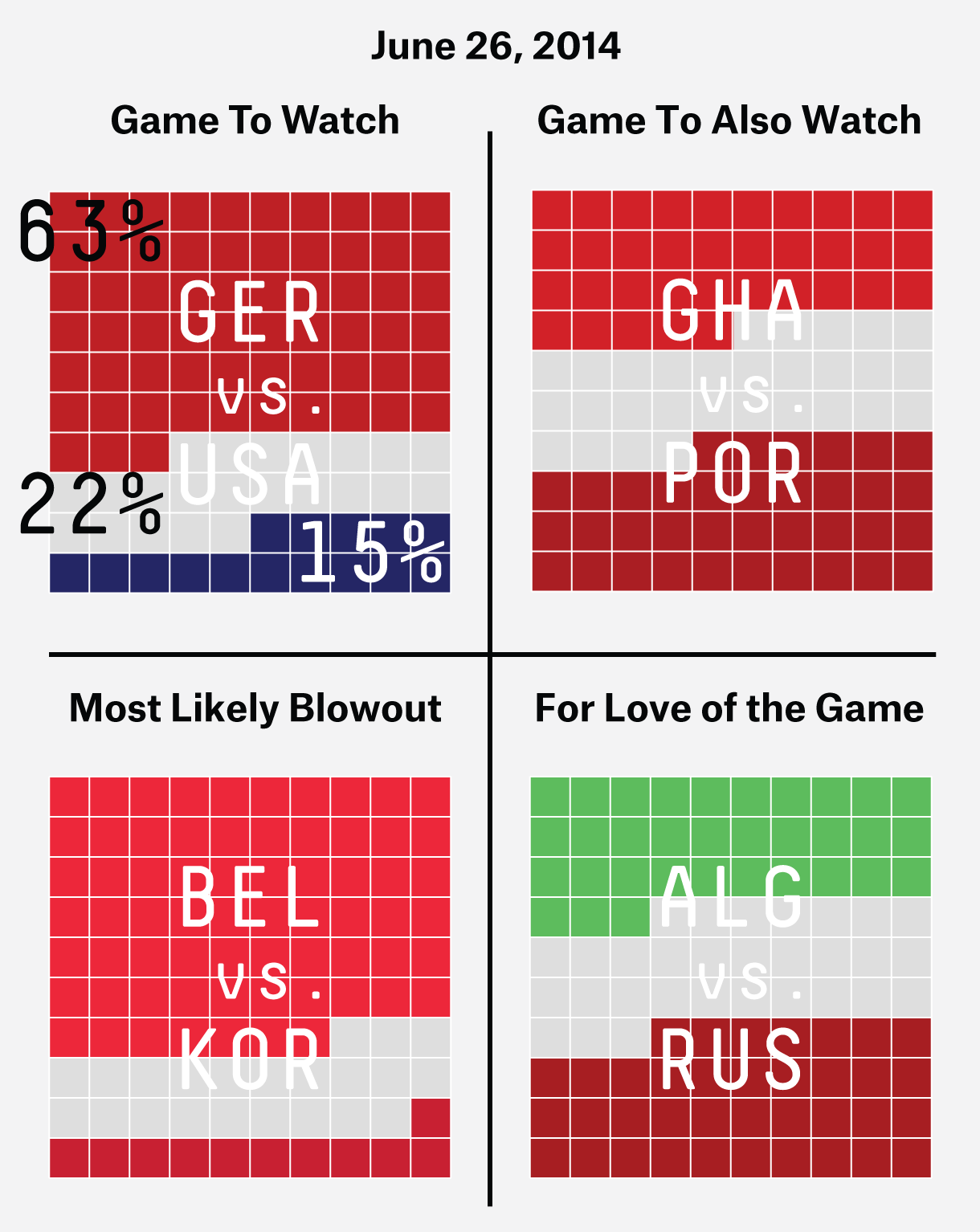 Group G has shaped up to be one of the most exciting yet-to-be-decided groups of the tournament — as it stands, no team is mathematically guaranteed to advance (though Germany is very close at 99.7 percent). The are a huge number of possible outcomes of Thursday’s matches, and any team can technically still advance to the next stage of the tournament.

If the uncertainty of Group G isn’t enough to make you tune in, the level of play we’re expecting to see between the U.S. and Germany should; the teams’ combined Soccer Power Index scores is higher than that of any two teams playing Thursday. Although the odds are heavily favored for Germany (63.4 percent to the U.S.’s 14.8 percent), we don’t expect this game to be a blowout (see Belgium vs. South Korea for that).

In their last meeting, a June 2013 friendly, the U.S. beat Germany 4-3. But friendlies are friendlies; the teams’ last competitive encounter was at the 2002 World Cup quarterfinals, when the Germans edged the Americans 1-0 in what is considered one of the best U.S. performances at any World Cup. (The U.S. did reach the semifinals at the inaugural 1930 World Cup.)

The Americans will be looking to match the Germans better than they did in 2002, which will be difficult against a German offense that is the second-strongest in the tournament (with a 3.2 SPI offensive score). At a minimum, a draw would send the Americans to the knockout stage, so a 0-0 scoreline will suffice. But the Germans are a full goal ahead of the Americans in projected goals for this match (2.1 to 0.9, to be exact), so shutting them out won’t be easy.

There are no players left on the American roster who played in that 2002 game, but the U.S. is equipped with a roster full of German-Americans. Fabian Johnson, John Brooks, Julian Green, Jermaine Jones and Timmy Chandler are all of German-American descent, which perhaps isn’t very surprising given head coach Jurgen Klinsmann’s German roots. Johnson and Jones spent time on Germany’s youth national teams, and four U.S. players (Chandler, Green, Brooks and Johnson) currently play in the Bundesliga. All of this to say that there might be even more at stake on Thursday for some of these players than the numbers suggest.

The Argentina-Nigeria game started with a flourish, as Lionel Messi’s third-minute opener was matched by Ahmed Musa’s fourth-minute equalizer. It was the first time in World Cup history that both teams scored within the first five minutes of a match. And to follow it up, in the second half, Musa scored in the 47th minute and Marcos Rojo the 50th.

Messi’s opening goal was the first conceded by Nigeria; entering the match, the Super Eagles were the only team that had not allowed a goal in this year’s tournament. Messi’s second goal came from a free kick, something and somewhere commonplace for him but rare for Argentina in the World Cup.  Messi has scored three of his five career World Cup goals from outside the penalty area, and his nine free kick goals over the past four La Liga seasons are second only to Cristiano Ronaldo’s 13. But it was Argentina’s first free kick goal in the World Cup since 1982.

Messi’s second goal gave Argentina the lead just before halftime, essentially guaranteeing La Albiceleste the win. Argentina is now 28-1-0 in World Cup matches when leading at half, with its single loss coming in the 1930 final to Uruguay. Messi also became the third player at this year’s tournament with a multi-goal first half (Switzerland’s Xherdan Shaqiri later became the fourth), something that no player managed in the 2010 tournament.

Although Nigeria lost, it became the first African team to advance to the knockout stage for a third time. Musa’s brace was the first for Nigeria in its World Cup history, and Nigeria passed Cameroon for the most goals by an African nation in the World Cup.

France and Ecuador played to a scoreless draw, good enough for France to win Group E.  The French had the advantage throughout the match, finishing with 242 touches in the attacking third compared to 57 for Ecuador. But France was held scoreless in large part thanks to Ecuadorian goalkeeper Alexander Dominguez, whose nine saves are tied for the most in a match this tournament. He leads all players with 18 total saves.

The Swiss finished second in Group E , thanks to a hat trick from Shaqiri — the first by a Swiss player in the World Cup since Josef “Seppe” Hugi in 1954. The game also marked the first time Switzerland scored three goals in a World Cup match since 1994. — Jacob Nitzberg, senior stats analyst for ESPN

The United States and Germany have an interesting historical relationship, to say the least. The strong ties between the world powers are well known, despite recent hiccups, such as the revelation that the American National Security Agency had been spying on German Chancellor Angela Merkel. Germans and Americans also often visit each other’s countries and even migrate between them. According to the OECD International Migration Database, 20,149 American nationals migrated to Germany in 2011, and 6,125 German nationals moved in the other direction. This may seem like a big disparity, but when adjusted for total population, just about .001 percent more Germans per capita migrated to the U.S. than the other way around. Cross-tourism data shows a similar relationship. The U.S. Department of Commerce reports that 1.88 million Germans visited the United States in 2012, while the German National Tourist Board shows that 4.85 million Americans spent time in Germany the same year. — Hayley Munguia

CORRECTION (June 26, 10:21 a.m.): An earlier version of this story incorrectly stated that Landon Donovan would have been the only returning player on the U.S. team this year from the 2002 World Cup quarterfinals. Demarcus Beasley is on the current roster and was on the 2002 team, but didn’t play in that quarterfinals match.

CORRECTION (June 26, 10:58 a.m.): Previously, this story mistakenly said that any two teams from Group G could move on to the next round of the tournament. While any one team can still advance, there is one combination of two teams — Ghana and Portugal — that cannot advance together.