Tuesday’s match to watch is Italy vs. Uruguay, essentially a must-win duel (for Uruguay at least) between the 16th- and 10th-best sides in the world according to ESPN’s Soccer Power Index (SPI). A surprisingly close second? Costa Rica-England, which features a group leader and an eliminated team with nothing but pride to play for. In between, there’s plenty of action in Group C, where every team is technically alive and fighting to advance to the Round of 16. 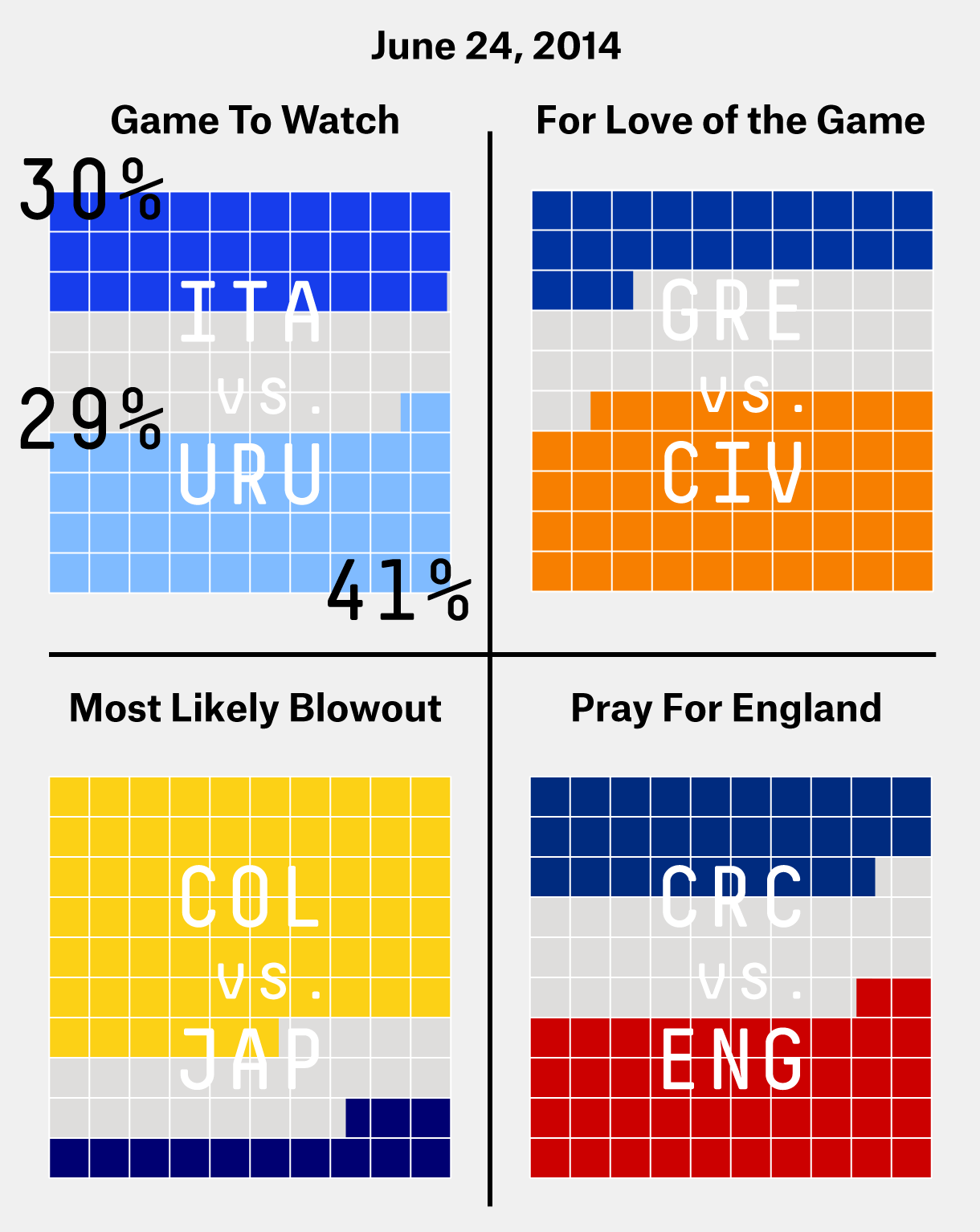 It’s tough to overstate what’s on the line in Tuesday’s match between Uruguay and Italy. Both teams are tied for second place in Group D with three points apiece, although Italy holds the all-important tiebreaker with a superior goal differential.

Group D’s leader, Costa Rica, won its first two matches and has guaranteed itself a spot in the next round, so there’s only one unclaimed berth left in the group. Uruguay is the favorite to win the match by SPI, about 41 percent to 30 percent (with a 29 percent probability of a draw), and that’s not because of defense. Neither team has been particularly dominant at that end of the pitch, but Uruguay has allowed four goals in the tournament, including three to a Costa Rican side that’s far from a scoring juggernaut.

Instead, the odds are in Uruguay’s favor mostly because — theoretically speaking — it has the better offense, led by the sublime forward Luis Suarez. After not appearing at all in Uruguay’s opening loss against Costa Rica, Suarez returned from a knee injury Thursday to score a pair of goals and help sink England’s World Cup hopes. He’ll continue to get support from the passing of Edinson Cavani, Cristian Rodríguez and Nicolás Lodeiro. But Suarez aside, La Celeste has had some difficulty generating consistent scoring chances in the tournament so far, and Uruguay will have a hard time winning if it continues to muster only 8.5 shots per game.

Meanwhile, Italy was expected to be in the middle of the pack offensively before the tournament, and it’s played largely to form. Mario Balotelli has been his customarily uneven self; he picked up a goal and caused all manner of havoc against England, then promptly had a terrible game (three offsides, one yellow card and only one shot on target) against Costa Rica. Andrea Pirlo’s passing remains superb, and the Italian offense plays with an efficient style — forgoing crosses in favor of passes through the middle of the pitch — but it’s also had a lot of trouble sustaining attacks in the opponent’s third.

Uruguay might not be the best opponent for the pass-heavy Italian style; it’s been one of the best defenses at intercepting passes so far in the World Cup. Watch for the stark contrast between Italy’s ball control-centric offensive game and the more direct Uruguayan style, which sacrifices possession in favor of the long ball, and attempts to win by attacking from the wings and winning balls in the air. Each approach represents one side of a fierce philosophical divide in soccer, and which one prevails will go a long way toward determining who advances out of Group D.

It’s worth noting that our World Cup odds list Italy as the favorites to advance despite Uruguay being favored in this specific match. That’s because in the event of a draw, Italy would claim second place in the group on goal differential. An Uruguayan win is the single most likely outcome of the game, but there’s also a 59 percent chance that Uruguay doesn’t win the match and fails to advance. Confused yet?

The second-best game of the day (at least according to our method of taking the harmonic mean of the two competitors’ SPI scores) is Costa Rica vs. England. It’s a fine matchup, but the stakes are as low as it gets for both teams. Costa Rica has clinched a berth in the knockout round (and has an 89 percent chance of winning Group D), and England has been mathematically eliminated.

The remaining games have some implications for the next round, though Colombia has already punched its ticket into the Round of 16 and Japan’s odds are slim. Greece vs. Ivory Coast offers a bit more to play for: Greece has a better than 19 percent chance of making it to the knockout stage, but SPI also predicts the match to be a dreary, low-scoring affair.

The Netherlands avoided a matchup with Brazil in the Round of 16 by defeating Chile 2-0 in their Group B finale Monday. The Netherlands’ chance of advancing to the quarterfinals is now 69 percent, while Chile must face Brazil on Sunday with odds of 26 percent. The Dutch would have been an underdog against Brazil, advancing 23 percent of the time.

For the first 75 minutes Monday, the Netherlands struggled to get opportunities, completing two of 16 passes into the attacking penalty area and creating four total chances. Then in the final 15 minutes plus stoppage time, the Dutch completed two of four passes into the attacking penalty area, creating two chances and scoring on both. Substitute Leroy Fer gave the Netherlands the lead less than two minutes after entering the match with just his second touch of the game.

The Netherlands struggled not only on passes into the box; Dutch players completed 63.9 percent of passes overall, their worst rate in a World Cup match in at least 50 years. In their first two wins, the Dutch completed 78.9 percent of their passes.

Part of the trouble could have been that Chile was fouled 26 times, the most in a match in this year’s World Cup. Forward Alexis Sanchez was fouled nine times, two more than anyone else this tournament.

Later, Mexico and Croatia were scoreless through 70 minutes, and Mexico was poised to become the first team under the current tournament format to advance to the knockout round scoring exactly one goal. But then El Tri scored three times in 11 minutes to propel Mexico to the knockout round and a matchup with the Netherlands.

Two of Mexico’s three goals came from headers — a rarity, as El Tri scored two headed goals in its past two World Cup appearances combined. Mexico’s third goal came from Javier Hernandez, who’s come off the bench in each of Mexico’s three matches and ended his career-long scoreless streak for his country Monday. His goal was one of 21 scored by substitutes this tournament, the most ever in a group stage (substitutes were first allowed in 1970). —  Jacob Nitzberg, senior stats analyst, ESPN

Believe it or not, Italian food just wouldn’t be the same without its relationship with Uruguay. Although the country is known for its carb-heavy offerings, the roles of meat and fish in the Italian diet can’t be discounted. According to 2012 data from the Organization for Economic Cooperation and Development, 45 percent of Uruguay’s exports to Italy were bovine meat, followed by frozen fish fillets, at 16 percent. Follow the trade route in the opposite direction, and Italian exports to Uruguay run the gamut. They’re mostly concentrated in machinery — sewing machinery, tractors, furnaces, etc. But perfumery, cosmetics,and eyewear play a noticeable role as well. And, of course, it wouldn’t be Italian trade if it didn’t include pasta, of which Italy sent a healthy $2.4 million worth to Uruguay. — Hayley Munguia