Although Belgium vs. Russia features slightly higher-rated teams, we’ll be watching the U.S. play Portugal. It projects to be a closer match — at least according to ESPN’s Soccer Power Index (SPI). 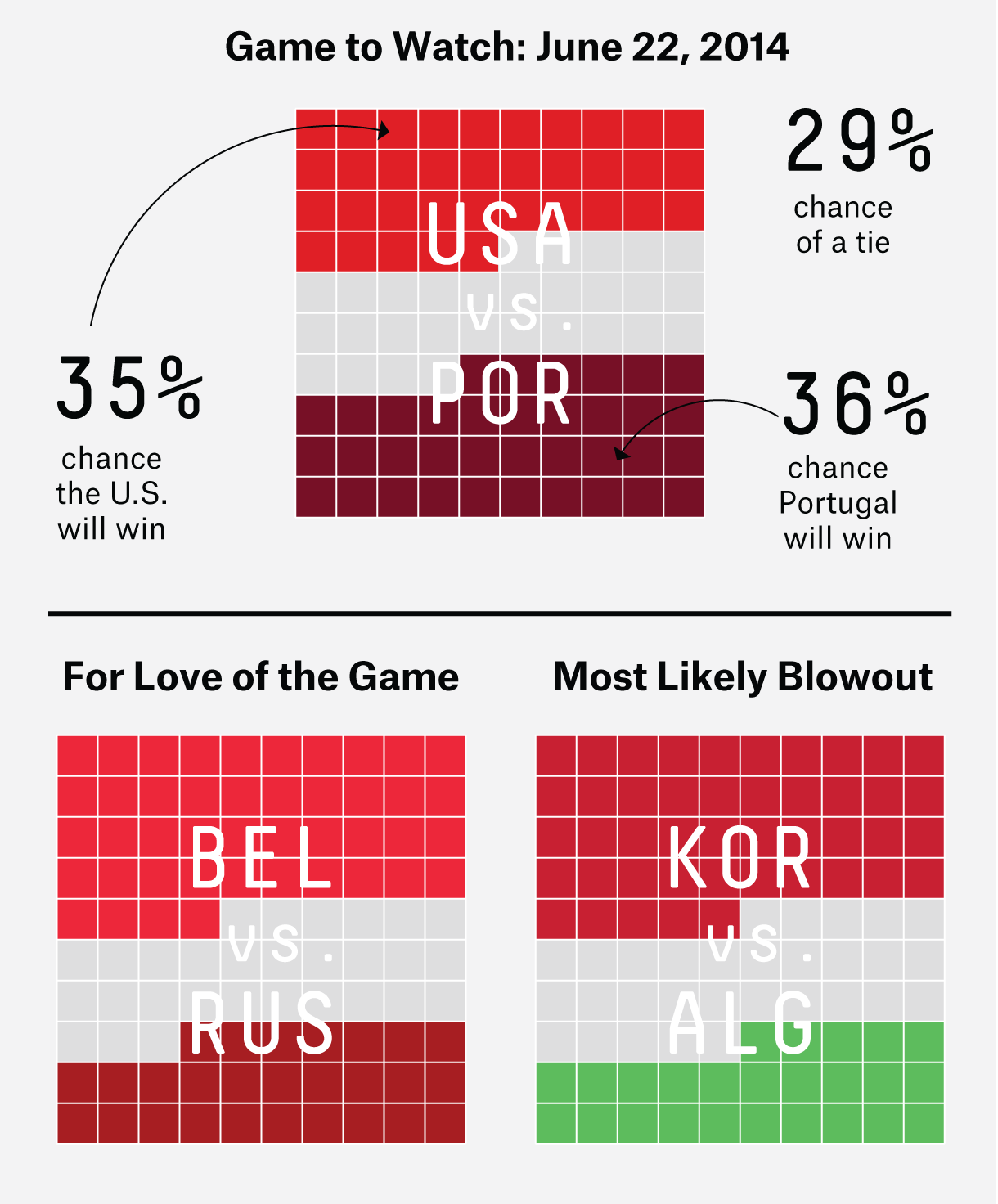 Our predictions use SPI, a rating based on an algorithm for assessing team strength. The betting odds reflect the wide range of world opinion on teams, or at least the opinion of those willing to wager money on match outcomes using sites such as Oddschecker. Despite these different approaches, the two forecasting systems are usually pretty close. For most of the remaining matchups in the group stage, the win probabilities the two models assign to each team are within 20 percent of each other.

The U.S.-Portugal match, however, is divisive. SPI sees the two sides as about equal now that the U.S. has beaten Ghana 2-1 and Portugal has lost to Germany 4-0. But those results haven’t swayed many hearts and minds and wallets. The U.S. also is favored more by SPI than by bettors in its last group-stage match, against Germany on Thursday. And bettors also like Portugal much more than SPI does for its group-stage finale against Ghana. These Group G matches represent among the biggest disagreements between SPI and bettors, aside from the betting odds favoring big underdogs Japan and Cameroon more in their finales against Colombia and Brazil, respectively, and Honduras less against Switzerland, than SPI does.

Portugal supporters better hope the bettors are right: Their team could really use a win. After Ghana and Germany drew Saturday, 2-2, Portugal’s chance of advancing to the knockout stage fell slightly, to 22 percent from 23 percent. U.S. knockout hopes also took a small hit, but remain nearly a 2-in-3 proposition.

Portugal’s fortunes will rest with its star, Cristiano Ronaldo — even more than usual since defender Pepe is suspended from the match after getting red-carded out of Portugal’s opener. Historically, Portugal hasn’t been able to count on a Ronaldo goal when times are tough. In 11 World Cup matches, Ronaldo has just two goals, and each of these came when Portugal already led — in wins over massive underdogs Iran (in 2006) and North Korea (2010). When Portugal has been tied or trailed, Ronaldo has taken 42 shots, 12 of them on target — but hasn’t scored.

Belgium and Russia have less recent World Cup success than Portugal has but are better or nearly as good, respectively, according to SPI. Here, bettors and SPI agree: Belgium is the sizable favorite over Russia. The forecasts also agree that in a matchup of one of the World Cup’s worst teams and its absolute worst, South Korea is favored against Algeria.

Argentina and Iran kicked off the 10th day of World Cup — or more accurately, Argentina attacked while Iran hung on for dear life. Later in Fortaleza, Brazil, a record-tying goal from Miroslav Klose earned the Germans a draw with Ghana.

Iran largely conceded attacking-third possession (or possession overall, for that matter; Iran completed 113 passes, the lowest of any World Cup team in the past 50 years) but attempted to dig in at the penalty area. Argentina still posted a 28-8 touches in the box advantage. That +20 differential on touches in the box is only the second such instance this tournament (France was +20 against a 10-man Honduran side).

None of it mattered on the scoreboard, as the Iranians looked ready to steal a shocking point — until, in the first minute of stoppage time, Lionel Messi’s left-footed shot bent inside the back post for Argentina’s winning goal: a 32.9-yard strike that was the longest of his three World Cup goals and his longest goal of 2014.

In the next match, Germany and Ghana lulled the soccer-loving world to sleep for the first 45 minutes of their Group G match. But the teams scored four goals in a 20-minute span in the second half of what became a thrilling 2-2 draw.

Asamoah Gyan scored his 41st goal for Ghana and fifth career World Cup goal. The list of players at this tournament with more World Cup goals than Gyan is fairly short — Klose, David Villa, Diego Forlan, Arjen Robben and Thomas Muller — and he briefly put Ghana ahead. For eight minutes, Ghana had even the most confident German fans sweating. Germany hadn’t lost in 19 straight World Cup matches when scoring first (since 1994 vs. Bulgaria), and Ghana looked primed for the first win in its World Cup history when conceding first.

But Klose, the super sub, struck on his first touch of the game. A German corner was flicked on by Benedikt Howedes to Klose at the back post. His sliding finish tied the game and vaulted him into a tie with Brazil’s Ronaldo for the top spot on the career World Cup scoring list with 15 goals. — John Parolin, senior stats analyst, ESPN

Those familiar with the Diamond Quarter in Antwerp know that the diamond trade plays a significant role in Belgium’s economy. According to Organization for Economic Cooperation and Development data, Belgium imported about $33 billion worth of diamonds in 2012. The U.K. is the source of most of those stones, but Russia is the second-largest provider, exporting about $5 billion worth (out of $15 billion total Russian exports to Belgium). While Russia may be focusing on keeping Belgians well-accessorized, Belgium is busy just keeping Russians well. About 43 percent of Belgian exports to Russia were medicaments and health-related chemicals and products, including orthopedic devices, vaccines and X-ray equipment. — Hayley Munguia