Thursday kicks off the 2014 FIFA World Cup — the greatest sporting event in the world (don’t argue) — featuring most of the world’s best soccer talent. The month-long tournament can be a marathon for spectators: On any given day there can be up to four 90-minute games. This can make deciding which game to watch difficult! That’s why we’re here to help.

Every day there’s World Cup action, FiveThirtyEight will highlight a game to watch, what to look for and what it means. In which games are you more likely to find multiple goals, or possession-style play, or tremendous defending? Which players should you look out for and why?

We start with an easy day: There’s only one match to watch on Thursday, between Brazil and Croatia. For soccer fans, it’s a must-watch match, not only because of its curtain-raising function. We’ll all want to see how Brazilian star Neymar and his teammates handle the pressure of playing as favorites in a soccer-mad nation deeply divided about the merits of hosting the quadrennial tournament. 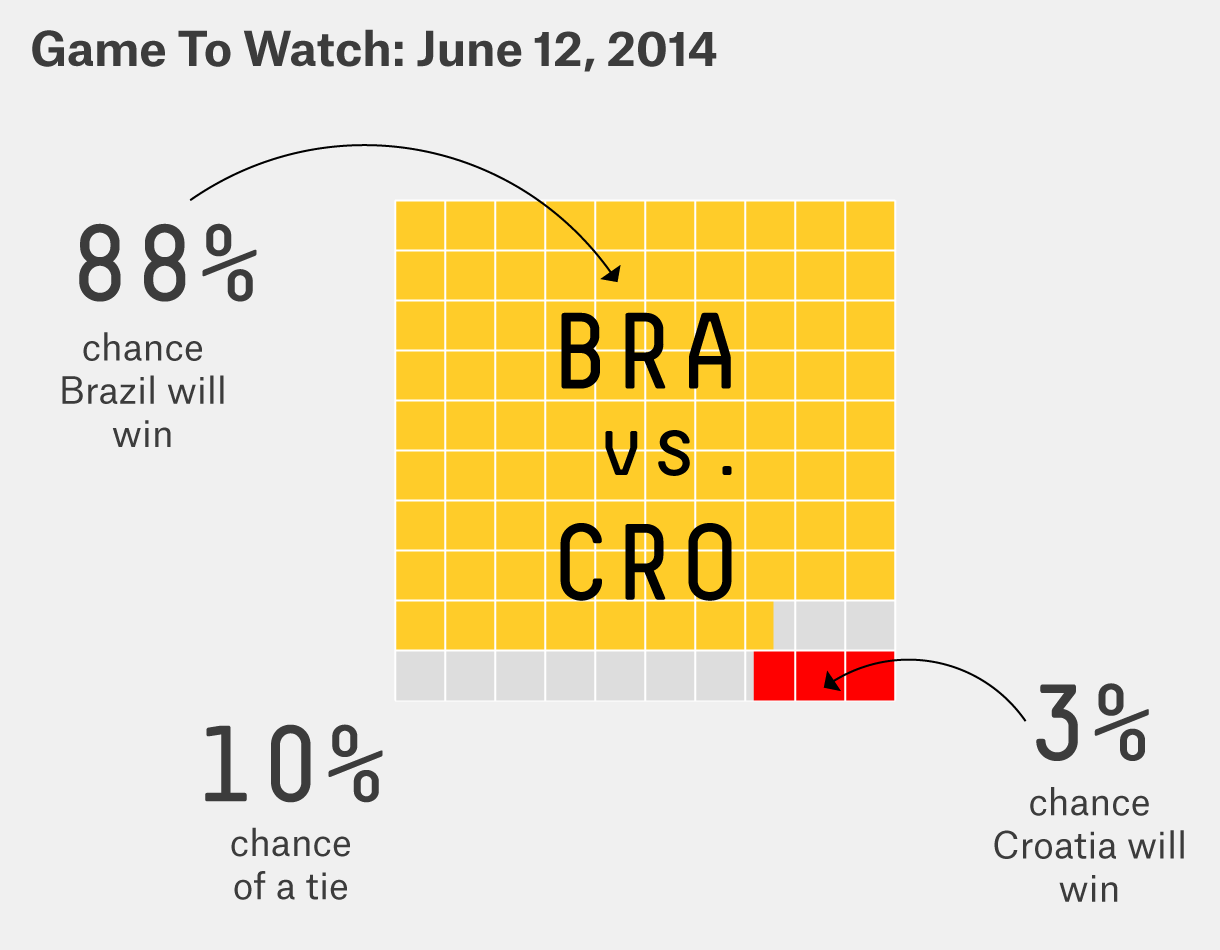 SPI is just two World Cups young, so we can’t use it to rank this game among history’s World Cup openers. But Elo ratings — a system imported from chess that transforms head-to-head results into a rating for forecasting future matchups — do go back to the first World Cup, hosted by Uruguay in 1930. The bigger the difference between two teams’ Elo ratings, the higher the probability the better team wins. Brazil’s edge over Croatia is 326 Elo points, the second-biggest margin among World Cup openers, behind France’s 364-point lead over Senegal in 2002.

But that likely understates Brazil’s advantage Thursday, because the Seleção is playing in Brazil. Home-field advantage is worth 100 points according to the Elo formula, and makes Brazil the biggest favorite heading into a World Cup opener ever. That’s no guarantee of a Brazil win, though. Senegal won that 2002 match against defending champion France, 1-0.

Here are the opening World Cup games since 1930, not counting years when more than one match opened the tournament. 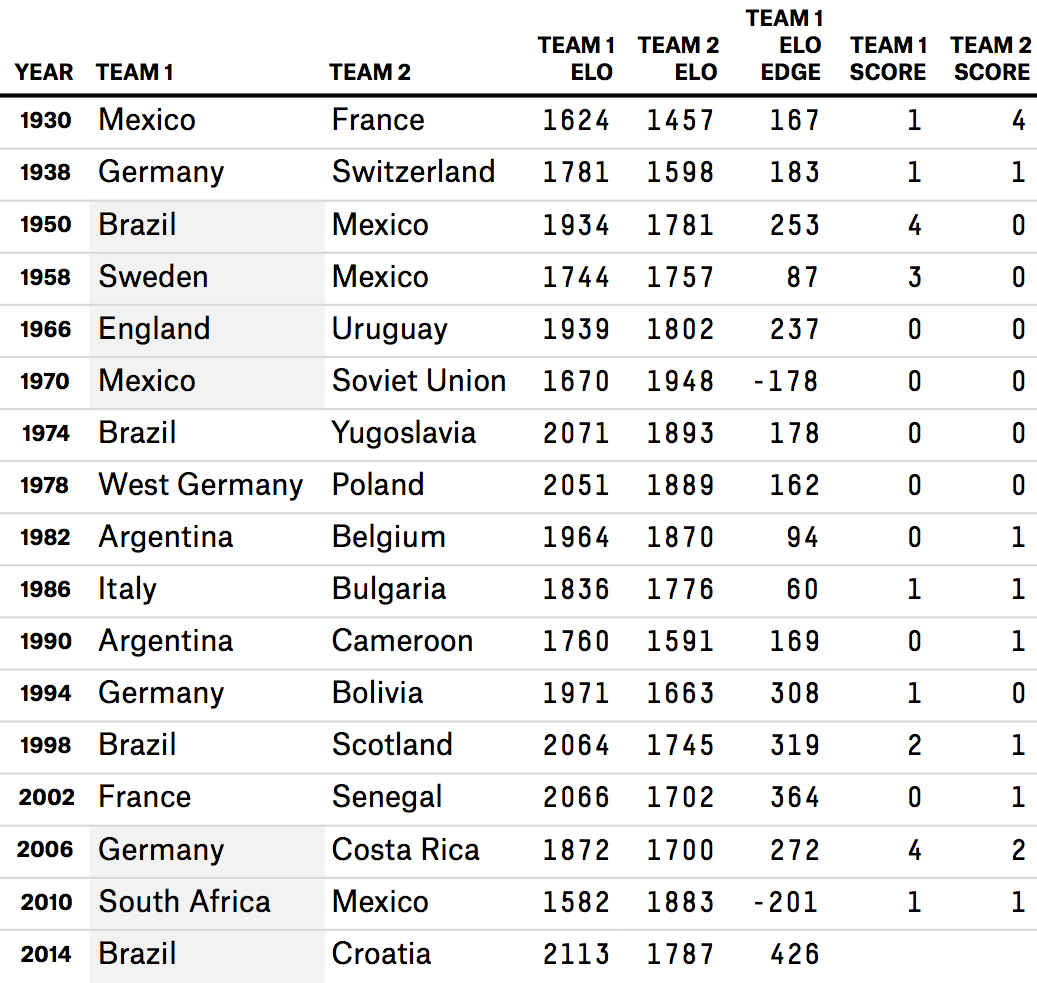 Here’s the good news for Croatia: Even if it loses to Brazil, as expected, and then Mexico beats Cameroon on Friday in the other Group A opening match, Croatia remains very much in contention. Croatia would trail Mexico by three points in the standings in large part because it had an opening match that was so much tougher. The schedule itself is worth a 2.8-point swing in Group A standings after each side’s first match, based on SPI probabilities. SPI projects Mexico would, on average, be 1.4 points ahead of Croatia after each team’s opening matches. But if Croatia — not Mexico — had drawn Cameroon, then Croatia could have expected to be 1.4 points ahead of Mexico.

That’s the biggest single swing based on opening-game schedule disparity between the two clubs likely to fight for second in any of the eight groups. So even if Croatia doesn’t pull a Senegal, its knockout-stage fate will likely rest largely on how it does against Mexico on June 23.

Which Brazilian products are the Croatian players most likely to have consumed before their arrival in Sao Paulo? The BACI International Trade Database, which uses data from the United Nations Statistics Division, has some clues. The most recent data, from 2011, shows that 67 percent of all exports from Brazil to Croatia were food items, and raw sugar alone accounted for 45 percent of all exports. That’s $99.9 million in sugar.

What about Brazilian stomachs’ relationship with Croatia? Food only makes up 0.15 percent of all Croatian exports to Brazil, with wine as the second largest product. In monetary terms, these wine exports only amount to $22,881.06. That’s equivalent to 1,271 bottles of Zlatan Plavac Grand Cru (2010 vintage) which comes recommended by Wine Enthusiast magazine. — Mona Chalabi

CORRECTION (June 13, 10:10 a.m.): A table in an earlier version of this story incorrectly listed the opening game of the 1998 World Cup as Norway vs. Morocco. It was in fact Brazil vs. Scotland. The table has been updated to correct this error, and also with the latest data from Eloratings.net. The original table also listed opening games for years in which several matches started simultaneously. We’ve removed those years since there was no true opener.