Near the end of last season, Cincinnati Enquirer writer Paul Daugherty penned a column about Reds first baseman Joey Votto. It was not kind.

You can extol the virtues of the almighty walk all you like. You can tell me how wonderful it is that Votto makes fewer outs than anyone. I understand all that, and it is all good. Especially if you’re leading off or batting 2nd. If you are batting 3rd, your responsibilities are different. Seventy-three RBI with Choo ahead of you all year is substandard. All numbers aside, Votto doesn’t pass the eyeball test this summer. There have been times when he simply looks disengaged.

This might seem like stinging criticism, particularly the part where Daugherty jumps from Votto’s RBI total to accusing the Reds star of checking out. Thing is, select members of Cincinnati’s baseball media corps often bash Votto for being too passive — especially when he comes up with runners on base. Marty Brennaman, the radio voice of the Reds for the past 40 years, seems to do it all the time. That September 2013 column wasn’t remotely the only time Daugherty called out Votto. The idea of Votto as this submissive hitter who keeps his bat on his shoulder during RBI opportunities has become so widespread that even the Cardinals announcers brought it up when the Reds visited St. Louis last month. And as far as the eyeball test goes, well, it’s tough to watch Votto do something like this (on a 2-1 count, no less), and not shake your head a little:

That mid-at-bat stroll aside, is the narrative true? Is Votto hurting his team by turning into a wallflower when he gets chances to drive in runs? Or is this just another case of blaming a team’s best player for its failures?

Votto defenders, and Votto himself, argue that indiscriminately swinging at more pitches would hurt more than it would help. Votto’s elite batting puts him at or near the top of the league in walk rate every year. It also helps him avoid making weak contact on pitches out of the strike zone; since his 2008 rookie season, no qualified hitter has been better at getting on base (and thus not making outs) than Votto has.

So rather than pointing to simple walk rate or swing rate, we turned to ESPN’s TruMedia system for context. It slices and dices stats in countless ways, to the point where we can see how often Votto swings at pitches in the strike zone with runners in scoring position. That way, we can focus on the situations most conducive to knocking in runs and eliminate pitches out of the zone, which you’d want hitters to pass up anyway.

We came up with three ways to dissect this stat. First, we can see how often Votto swings at strikes when at bat with runners in scoring position, and whether he’s doing it more or less now than he has in the past. We can also compare Votto’s swing rate in those situations with those of other elite hitters. TruMedia data goes back to 2009, and Votto ranks third in the majors since ’09 in weighted runs created plus,1 so comparing Votto to the rest of the top five in that stat over the past half-decade makes sense. Finally, we can see how often Votto swings in these spots relative to league average.

The chart below tells the tale. 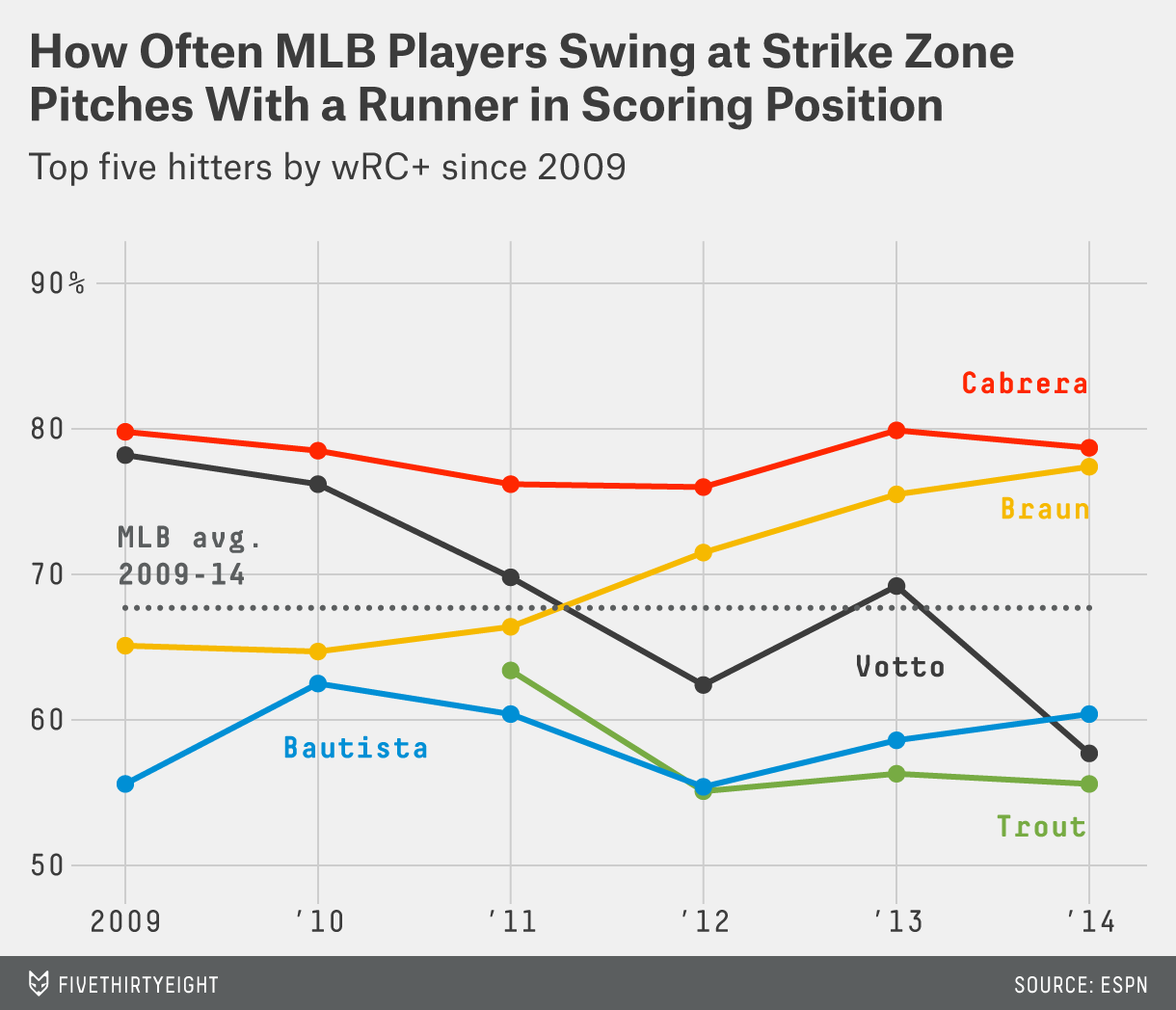 At first glance, yes, Votto has become much less aggressive with runners in scoring position over the past five-plus seasons. In 2009, his second full season in the big leagues, Votto swung at 78.2 percent of the pitches he saw in the strike zone with RISP, ranking him 10th among 155 qualified batters, just slightly behind the grip-it-and-rip-it approach of RBI-machine Miguel Cabrera. Votto’s number dipped slightly to 76.2 percent in 2010, still ranking among the league’s leaders. In 2011, that number fell precipitously to 69.6 percent, just a smidgen above league average. In 2012, it took another big tumble, with Votto’s swing rate plunging to 62.4 percent — No. 121 in the majors if he’d had enough at-bats to qualify for the batting title. Last year, he rebounded to 69.8 percent, once again a tick above league average. So far this season, the bottom has dropped out, with Votto swinging at just 57.7 percent of pitches in the strike zone with runners in scoring position, ranking him 171st among 187 qualified hitters. Those last 16 guys probably batted with their eyes closed.

Now let’s compare Votto to other elite hitters. Placing him side by side with those other top-five wRC+ guys — Cabrera, Mike Trout, Ryan Braun and Jose Bautista — nets surprising results. While Cabrera and Braun rank among baseball’s most aggressive hitters when they get pitches with runners in scoring position, Trout and Bautista have been far more passive … more so even than Votto, before this year.

Let’s run one more chart. Same hitters, same runners in scoring position situations, still using pitches in the strike zone, only this time we’ll look at fastballs only, since in theory you’d expect hitters to be more aggressive against heaters than, say, darting sliders or diving change-ups. 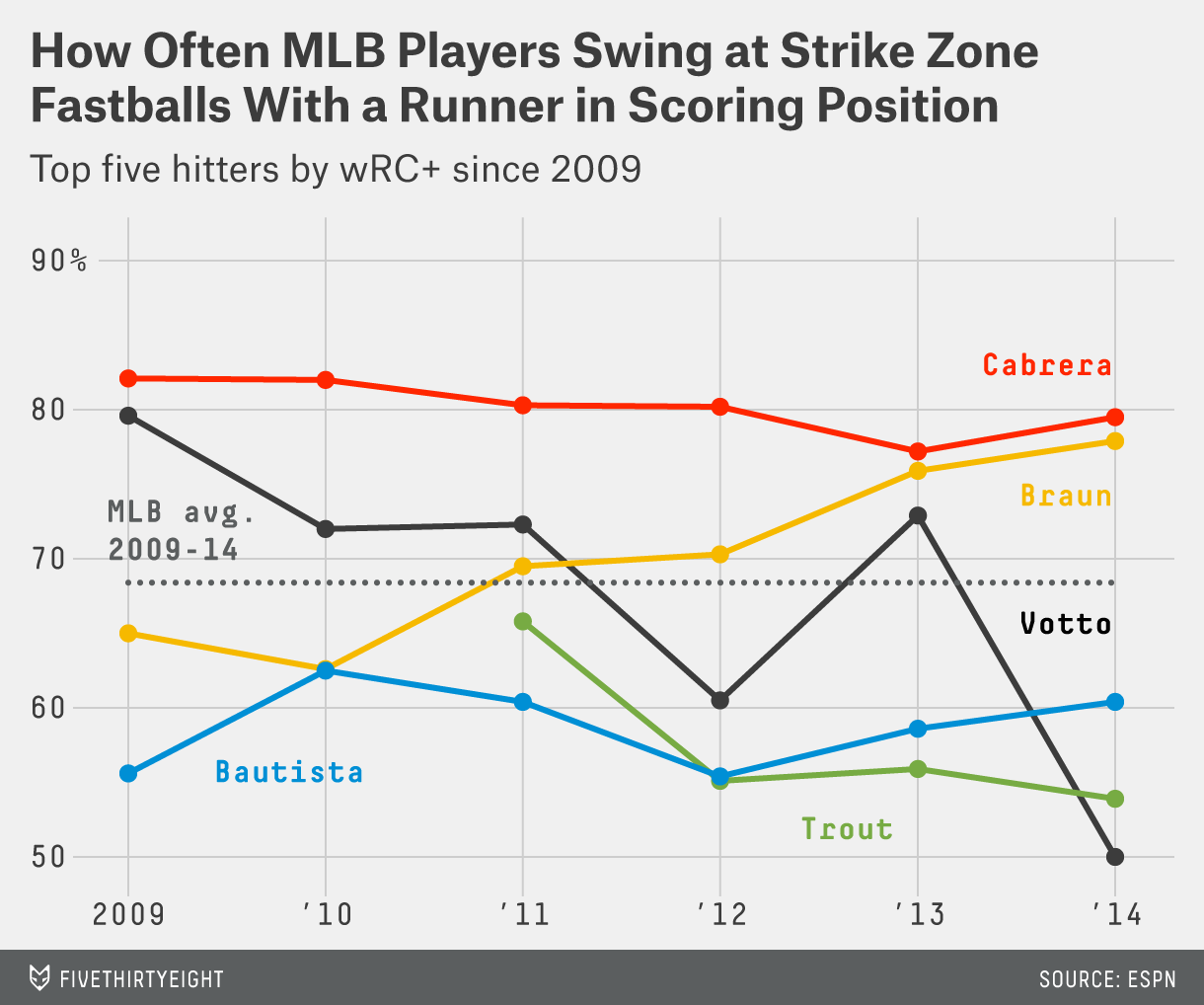 Same pattern, but check out Votto’s free fall this season. On fastballs in the strike zone with RISP, he’s swung an incredibly low 50 percent of the time, ranking 182 out of 187 batters.

So what’s going on here?

Leaving RBI aside, Votto’s power numbers have shrunk a lot over the past couple of years. Since his 37-homer MVP season in 2010, Votto has hit 29, 14 and 24 bombs, with just four so far this year. Using isolated power, a stat that gives a better read of a player’s pop than slugging average since it focuses only on extra-base hits, we see that Votto posted a career-low .186 IP mark last year, ranking a less-than-elite 44th among 140 qualified batters. He’s down to .169 IP this year, just the 72nd-best mark in the majors. If a hitter feels he can do less damage when he swings, he’s probably going to swing less often. Votto is one of the brainiest, most self-aware players in the game, so it’s no surprise to see him swinging less often than he has in the past, both with runners in scoring position and the rest of the time.

It’s hard to tell how aggressive Votto might be in the future, given what the numbers tell us. Go back and peruse those charts again. The two biggest drops in his swing rate (with runners in scoring position or otherwise) — and the only two times in his career that he’s been more passive than league average in RBI situations — have come in 2012 and this year.

In 2012, Votto suffered a painful knee injury, one that sapped his power dramatically until it knocked him out of the lineup for 50 games; of course he’s going to swing less often when he’s both playing in pain and not hitting the ball as hard when he makes contact. As for this year, it’s May 9. Votto has seen only 52 pitches in the strike zone with runners in scoring position, and just 36 of those were fastballs. We should probably wait until we have a larger sample of at-bats before we break out Tom Smykowski’s mat.

So yes, Daugherty’s belief that Votto has become more passive passes not only the eyeball test, but also the hard evidence test. Still, Votto doesn’t deserve this much criticism. We’re talking about a player who’s on track to reach base more than 40 percent of the time for the sixth straight season. He’s an excellent defender at first. An infield popup for him is like a Halley’s Comet sighting for the rest of us. And while he might be swinging less often than he used to, even that trend might prove to be much less pronounced than it looks right now.

Joey Votto remains one of the best all-around players on the planet, whether or not he ever makes the ghost of Hack Wilson sweat.