Monday’s article on the nation’s least popular governors did not include Gov. Bobby Jindal of Louisiana, because he is not up for re-election in 2014. (Louisiana’s next gubernatorial election will be in 2015, and Mr. Jindal will not be eligible, having served two consecutive terms.) But recent surveys suggest that Mr. Jindal has become very unpopular in his home state amid a series of battles on fiscal policy. A March poll from Southern Media & Opinion Research put Mr. Jindal’s approval rating at just 38 percent, against 60 percent disapproval. His numbers had been similarly poor in a February survey by Public Policy Polling.

Some national political commentators are treating the news as being self-evidently injurious to Mr. Jindal’s chances of capturing the Republican presidential nomination in 2016. Obviously, Mr. Jindal has plenty of time to turn around his image in Louisiana. But if he doesn’t, would Republicans really consider nominating someone who is so deeply unpopular among his own constituents?

Actually, you don’t have to go back very far to find a precedent for when Republicans did exactly that. Their nominee last year, Mitt Romney, was very unpopular among Massachusetts voters by the time he finished his single term as governor in 2006.

The chart below tracks Mr. Romney’s approval and favorability ratings during his term, based on data from PollingReport.com. Mr. Romney was reasonably popular throughout most of his tenure (as Mr. Jindal has been). But Mr. Romney numbers declined once he began to reposition himself as a candidate for national office (for instance, in gradually shifting his stance on abortion and contraception toward the right). 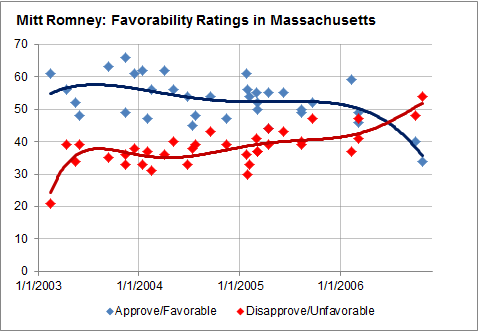 By late 2005, Mr. Romney badly trailed Massachusetts’s attorney general, Thomas F. Reilly, then considered the leading Democratic nominee for the 2006 gubernatorial election, in head-to-head polling. Mr. Romney’s polling did not improve any after he declined to run for a second term. Instead, the last poll conducted during his term, by The Boston Globe in October 2006, put his favorability rating at just 34 percent against a 54 percent unfavorable rating — similar to Mr. Jindal’s numbers now.

There are differences, of course, between Mr. Romney’s standing and Mr. Jindal’s — notably that it is much more difficult for a Republican to be popular in Massachusetts than in Louisiana. Nevertheless, this ought to demonstrate that having strong approval ratings in one’s home state is not a prerequisite for gaining the presidential nomination.

This is not to suggest that Mr. Jindal’s approval ratings in Louisiana won’t matter. It could constrain the way that he talks about his executive record. It could affect the way that local political reporters cover his candidacy, although how much that might spill over into national coverage is unclear. (Poor approval ratings at home might be more problematic for a candidate from an early-voting state like Iowa, New Hampshire or South Carolina, because reporters from those states can figure prominently in national coverage. It might also be problematic for a candidate from New York, New Jersey, Virginia or Maryland, because those states are in the national news media’s figurative and literal backyards.)

What matters more is how prominent Republicans react to Mr. Jindal’s home-state problems. The nomination process, especially at this early stage, is largely an insider’s game. Will Republican thought-leaders and prominent conservative news and opinion outlets spin the news by praising Mr. Jindal as a principled champion of conservative fiscal policies? Will they compare Mr. Jindal to Gov. Scott Walker of Wisconsin, who became unpopular after curtailing public-sector unions, but whose image recovered enough for him to win a recall election?

Or will even conservative news outlets begin to treat Mr. Jindal as a candidate with “electability” issues? The Republican presidential field is liable to be more competitive in 2016 than in 2012. If Mr. Jindal’s executive record is no longer seen as uniformly successful, it could reduce his comparative advantage against candidates like Representative Paul D. Ryan of Wisconsin, who have some similar strengths to Mr. Jindal but who lack his executive experience.

And what about the precedent established by Mr. Romney? It is a favorable example for Mr. Jindal in the sense of demonstrating that a candidate can be nominated despite poor home-state approval ratings. But Republicans may not see it that way if they regard Mr. Romney as having been a poor nominee. Instead, they may seek out a candidate whom they perceive as nimble and skilled enough to push the policy window toward the right without sacrificing his popularity — perhaps someone like Senator Marco Rubio of Florida.

None of this is to address the question of whether home-state popularity is in fact a leading indicator of how a candidate will come to be seen by voters elsewhere in the country. My personal view is that you could do a lot worse for reference points – local voters have a lot more information on a candidate. But I haven’t seen much research on the topic, and it is easy to think of some contrary examples (for instance, Sarah Palin was very popular in Alaska in 2008 but played poorly on the national stage).

Mr. Jindal’s home-state troubles are a reminder, however, that it can be difficult for a candidate to serve in an executive role and to position himself for national office at the same time. There was a series of active governors nominated by the parties between 1988 and 2000 (Michael S. Dukakis, Bill Clinton and George W. Bush). But there have been none since. Mr. Romney was a former governor but was almost six years removed from office at the time of his nomination and talked little about his executive record in either the primaries or the general election.

As the parties have become more nationalized, demanding greater ideological fealty from their candidates, sitting governors may face an unpleasant choice between working to preserve their standing among their constituents while alienating national party leaders – or pursuing a national agenda at the price of their home-state popularity.