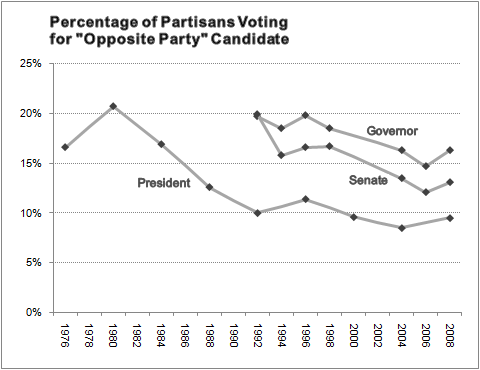 Those who bemoan the excessive partisanship in the country today might take comfort from some unlikely seeming residents in governors’ mansions. Red states like Arkansas, Kansas, Oklahoma,  Tennessee and Wyoming have Democratic governors; blue states like California, Connecticut, Hawaii,  New Jersey and Vermont have Republican ones.

Although states like Arkansas, Oklahoma and Tennessee have tended increasingly to vote Republican in recent presidential elections, they have relatively large numbers of registered Democrats, and often elect Democrats to local and state offices. Conversely, although the states in New England (as well as New York and New Jersey) have few registered Republicans, they have large numbers of independent voters, who are sometimes eager to counterbalance Democratic dominance. Still, when one considers that Wyoming cast just a third of its votes for President Obama, and Vermont just 30 percent for John McCain, these results stand out by comparison.

But it’s increasingly in doubt how much longer these aberrations might persist. Republicans are favored, overwhelmingly, to take back the governorship in Wyoming this year, where Gov. Dave Freudenthal, a Democrat, is retiring. Democrats, meanwhile, are more likely than not to win in Vermont, where the Republican incumbent, Jim Douglas, has declined to seek a fifth term. Likewise for a whole series of states in which incumbents are retiring or unable to run because of term-limits: Republicans are favored in Kansas, Oklahoma and Tennessee this year, as are Democrats in Connecticut and Hawaii.

FiveThirtyEight is still fine-tuning its forecasts for the governors’ races, but in many ways, the outcomes – like those for the presidency and Congress – seem to becoming increasingly more predictable: red states vote for Republicans, blue states vote for Democrats, and only a few swing states are truly worth watching.

The pattern stems in large part from the long-standing decline in the number of voters, in all types of elections, who are willing to cast ballots across partisan lines. In 1980, some 27 percent of Democrats voted for Ronald Reagan (another 6 percent voted for the independent, John B. Anderson), whereas 11 percent of Republicans voted for Jimmy Carter. This means that a total of 21 percent of partisans (voters who identify themselves as either Democrat or Republican) voted for the presidential candidate of the “opposite” party. In recent elections, however, that percentage has been halved: just 10 percent of partisans crossed party lines in the presidential election of 2000, and just 9 percent did in 2004 and 2008.

Cross-party voting has also become less common in elections to the Senate. In 1992, an average of 20 percent of partisans voted for the other party’s nominee for Senate, according to a compilation of exit polls. But that percentage declined to 12 percent in 2006, and 13 percent in 2008, in states in which exit polls were available. Cross-party voting remains slightly more common in gubernatorial races, but has declined from around 20 percent in the 1990s to around 15 percent today. (The detailed figures shown in the accompanying chart exclude cases where a third-party candidate was elected governor, like Jesse Ventura in Minnesota in 1998. For senate and gubernatorial elections, they also exclude the years 2000 and 2002, for which state-level exit polling was unreliable.)

To some in the electoral infrastructure, this might be a welcome change. Candidates no longer have to worry so much about voters in their own party deserting them – and they may find it easier to resist the resource-intensive temptation of pursuing voters across party lines. Instead, by turning out their bases – and by turning on a sufficient number of independent voters – they can usually guarantee a victory. The shift also makes life easier on pollsters. Since, by simply identifying a voter’s party, they can usually predict with 85 percent to 90 percent accuracy whom that voter will vote for, pollsters like Rasmussen Reports can often produce satisfactory results by heavily weighting their samples based on party identification, even if their polls otherwise suffer from gross methodological deficiencies.

Governors like Mr. Douglas and Mr. Freudenthal may be part of a dying breed. Indeed, these processes may tend to be self-reinforcing: the less a candidate bothers to develop a message that might appeal to voters in the other party, the less of an effort is made to broaden the appeal of the candidate’s party in future elections: Republican voters are presented with fewer examples of moderate Democrats, and vice versa.

Meanwhile, elections are becoming increasingly nationalized in a number of ways, with national party committees coordinating strategy, with major news media outlets (including The New York Times) displacing local ones, and with national politicians like Sarah Palin making endorsements in races far removed from their home bases. Conservative and liberal blogs, meanwhile, routinely involve themselves in local races, often organizing fund-raising or volunteer drives on behalf of more partisan candidates who might be running against moderate ones who break from partisan orthodoxy. The unresolved question, perhaps, is whether these partisan organizations are adapting to the changing preferences of voters, or if voters’ increasing insistence on voting within their party reflects the failure of the system to present them with a viable alternative.