The crown jewel of the Big Ten Conference college football slate was scheduled for Halloween: Ohio State vs. Penn State. Marketing-wise, it would be difficult to eclipse a whiteout primetime matchup in Happy Valley. After all, this was a meeting that in recent years set records for ratings and attendance, deciding divisions and trips to the College Football Playoff.

Instead, the Buckeyes ran out to a 14-point lead in less than 10 minutes and breezed past the still-winless Nittany Lions in an empty Beaver Stadium.

The actual can’t-miss tilt of the Big Ten calendar comes this weekend, when No. 3 Ohio State hosts No. 9 Indiana. Cut yourself some slack for not bookmarking this game when the schedule was released.

Indiana hasn’t entered a season ranked in the AP Top 25 in more than 50 years, since just after last winning the conference in 1967, and before this year, no coach in over 70 years had an overall winning record at the school.1 Last season was the program’s best in two decades: The Hoosiers went 8-5 and lost in the Gator Bowl. Arguably the program’s claim to fame entering 2020 was that they were considered the least annoying team in the Big Ten by Spencer Hall.

Even Indiana coach Tom Allen understands how surprising his team’s success has been to most of the country. “I get it, basketball is a big deal in this state,” he told ESPN.

If success is cyclical, it has opted to bypass the folks in Bloomington entirely. That is, until now. 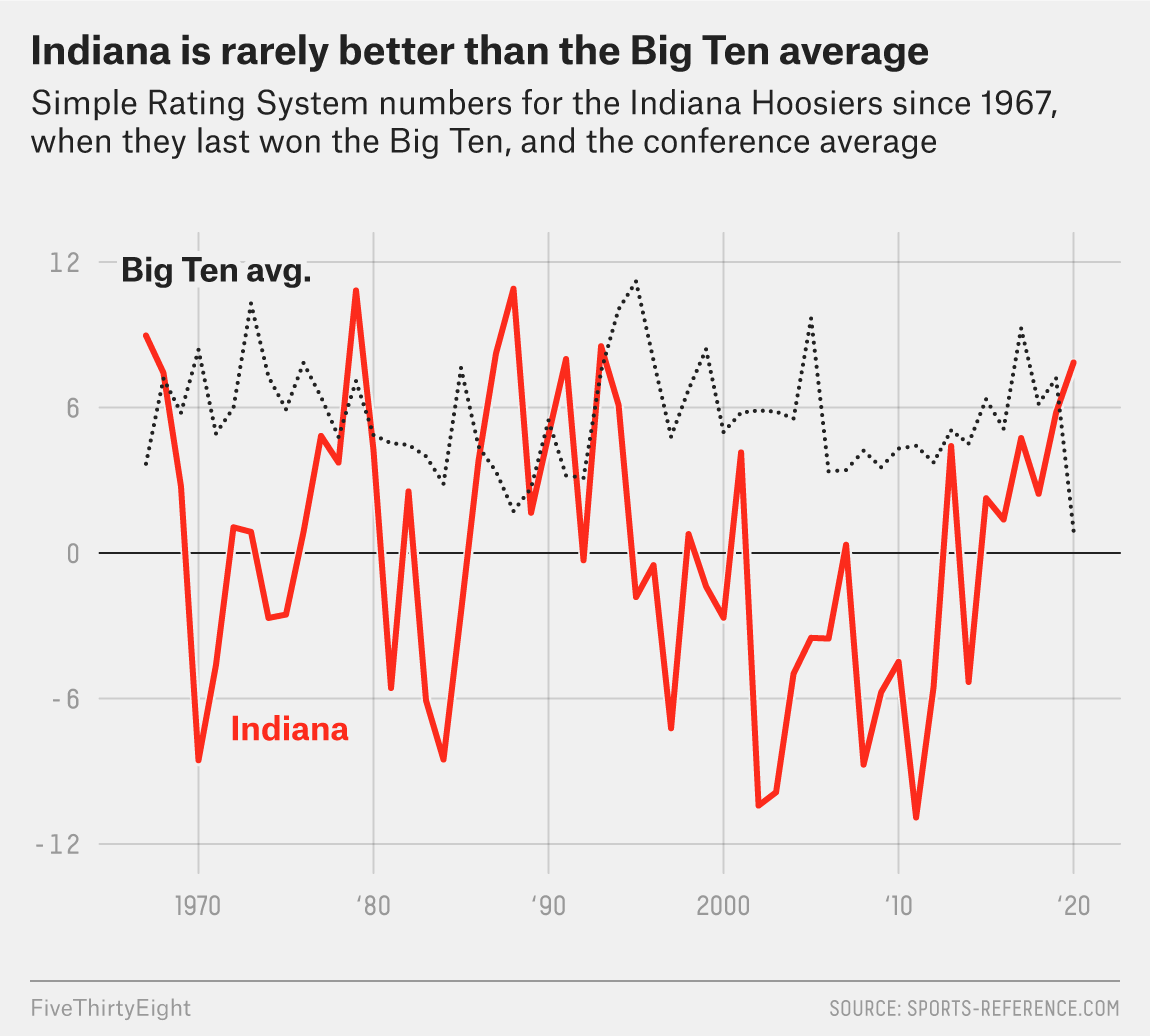 It seems like every week has been a historic one for the undefeated Hoosiers. Indiana entered the season opener against Penn State with a pitiful 1-22 all-time record in the series, only to win in an overtime thriller. In subsequent weeks, it snapped a 24-game losing streak to the Michigan Wolverines and picked up its first victory in East Lansing in 19 years. Its win over Michigan State came by way of a shutout, the first instance of the Spartans getting blanked at home since 1985. And now, a program with 19th century roots is days away from its first-ever top-10 regular-season showdown.

So how did Indiana get here?

The Hoosiers have garnered success mostly by way of a voracious defense that ranks fourth in efficiency through four games, having already scored more points off turnovers than they did in five of the past 14 seasons.

Behind a pressure-heavy defense, Indiana is setting the tone for Big Ten defensive units. The Hoosiers have the nation’s highest interception rate and the conference’s highest sack rate. Opposing quarterbacks have produced a QBR of 26.8 against Indiana, the 10th-best defensive mark in the nation. Last weekend, Payton Thorne and Rocky Lombardi combined to produce an adjusted QBR of 4.02 against Indiana, which is Michigan State’s worst single-game performance for which data is available.

A prolific defense is a necessity when Justin Fields is waiting in the wings. With Clemson quarterback Trevor Lawrence sidelined after a positive COVID-19 test, Fields is now one of a handful with strong odds to win the Heisman Trophy. Over three games, Fields has eviscerated defenses, posting a nation-leading 96.4 QBR, a cartoonish adjusted completion percentage of 92.6 and a whopping zero interceptions.

Fields’s counterpart across the field will be Michael Penix Jr., who has a top-50 QBR (69.7), go-go-gadget arms and a David-vs.-Goliath mindset. “I feel like we’re going to shock the world,” he said in September.

With an up-and-coming quarterback and an aggressive defense, Indiana is fielding its best team in a long time by just about every efficiency metric. 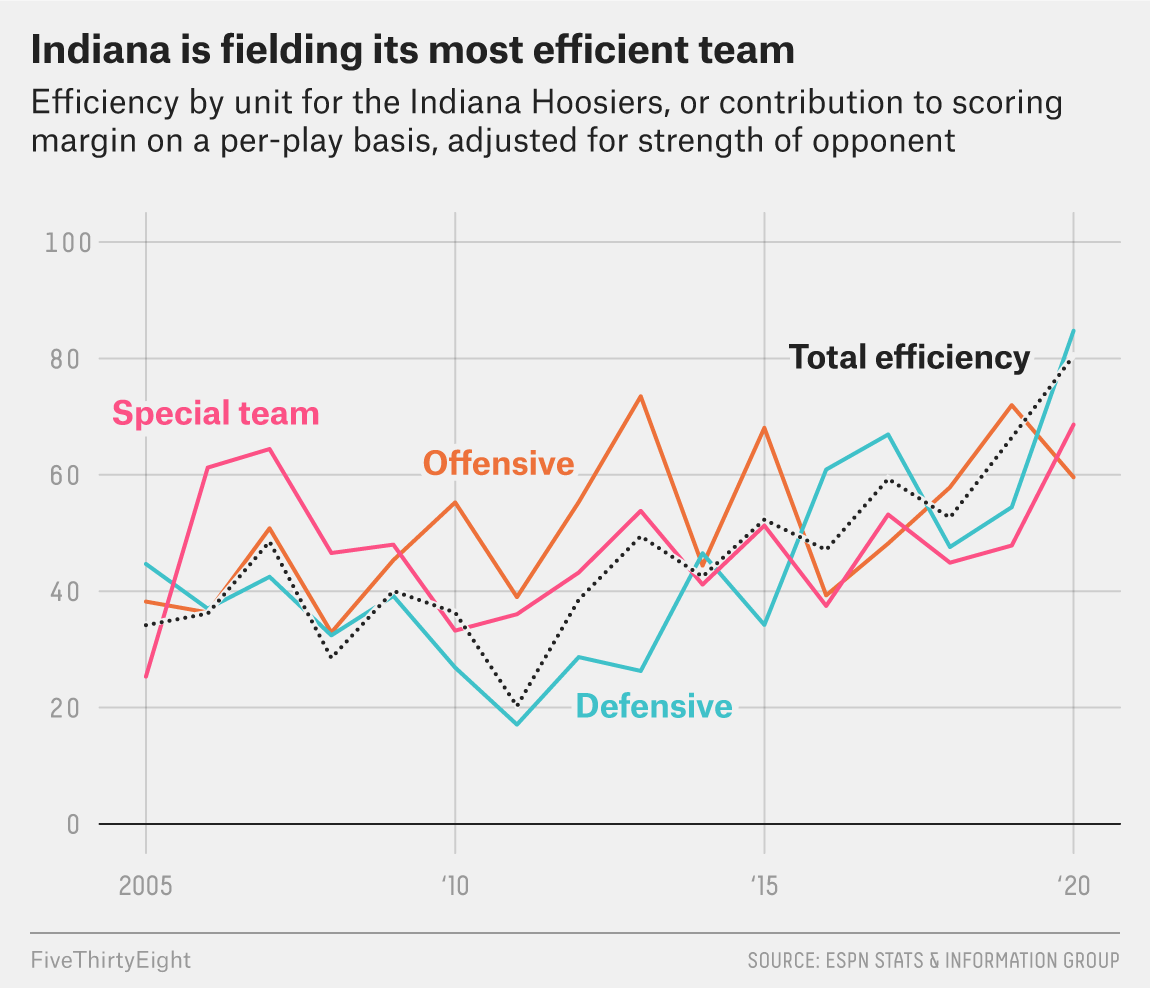 There’s a constant cadence in college football of familiar names hammering away at familiar punching bags. Indiana may have gone from victim to vanquisher in a matter of months, but that doesn’t mean the Hoosiers have won respect from betting markets: Ohio State opened in some areas as a 20.5-point favorite in one of college football’s games of the week. But if Indiana could pull off a win this weekend in the Horseshoe, it would pick up the inside track to the playoff. That’s a twist no one saw coming.