The Detroit Tigers nipped the Kansas City Royals 2-1 in the final game of a four-game series Thursday. That win snapped a 10-game winning streak for KC, but even with that setback the Royals lead the American League Central Division by half a game. In late June. This is not a drill.

If the baseball world seems shocked by the Royals’ sudden success, the franchise’s recent history may explain why. When the Royals beat the Tigers on Tuesday in the second game of their showdown for AL Central supremacy, the victory marked the first time the Royals had owned sole possession of first place since May 1, 2013.

Of course, downtrodden teams always have a better chance to claim bragging rights early in the season, when hot starts and small sample sizes can skew what we’re seeing. So consider this: The last time the Royals were in first place after June 1 was all the way back in 2003. That year, Kansas City preyed on a weak AL Central — one dragged down by a 119-loss Tigers squad and no elite teams — to own a share of first as late as Aug. 20. They ended the season seven games off the pace at 83-79, a lukewarm showing for most franchises. For the Royals, the finish was almost something to celebrate. Kansas City hasn’t made the playoffs since 1985, the longest postseason drought for any major league team by a span of eight years.

Now here’s the good news for Royals fans: Teams that win 10 straight games in a single season stand a good chance of making the playoffs. Which means that for the first time since “Careless Whisper” wasn’t at all ironic, the Royals could crack the postseason.

Going back to 1995, the first year of the wild card,1 we looked at all teams that had a streak lasting at least one game (you gotta start somewhere), to see how often those streaks portended October baseball. Here are the results: 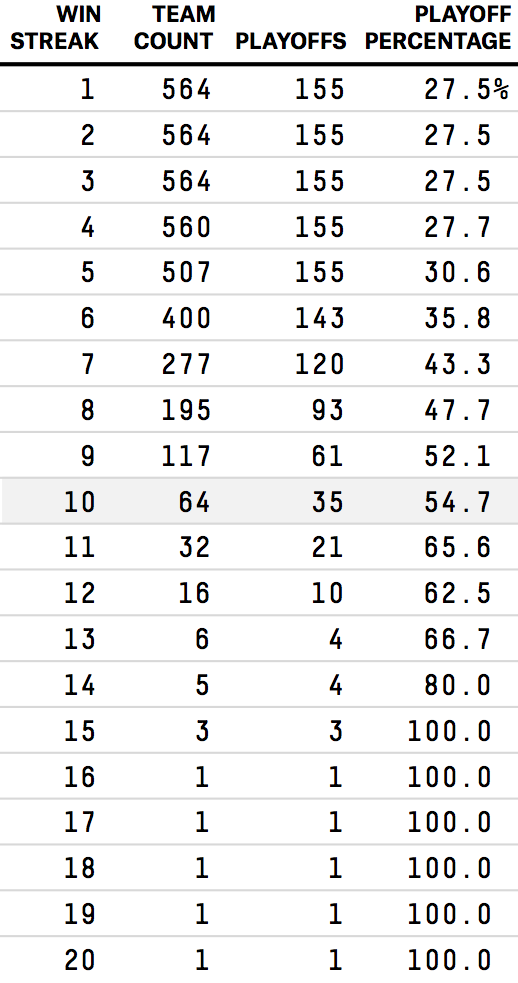 As you can see, every team passed through streaks of one, two and three wins, and all but four teams passed through a streak of four wins. By this measure, with a 10-win streak the Royals have about a 55 percent chance of making the playoffs.2

It’s not quite that simple, though. Before their streak began, the Royals’ record only stood at 29-32, so they may not be totally representative of the type of team that tends to have 10-game win streaks. To examine that further, we looked at historical winning streaks of a given length since 1995 and tracked what each team’s regressed winning percentage was before the streak started (that is, we added 67 games of .500 baseball — 33.5 wins and 33.5 losses — to each team’s record at the time).3 We also recorded each team’s regressed winning percentage from the previous season. The results: 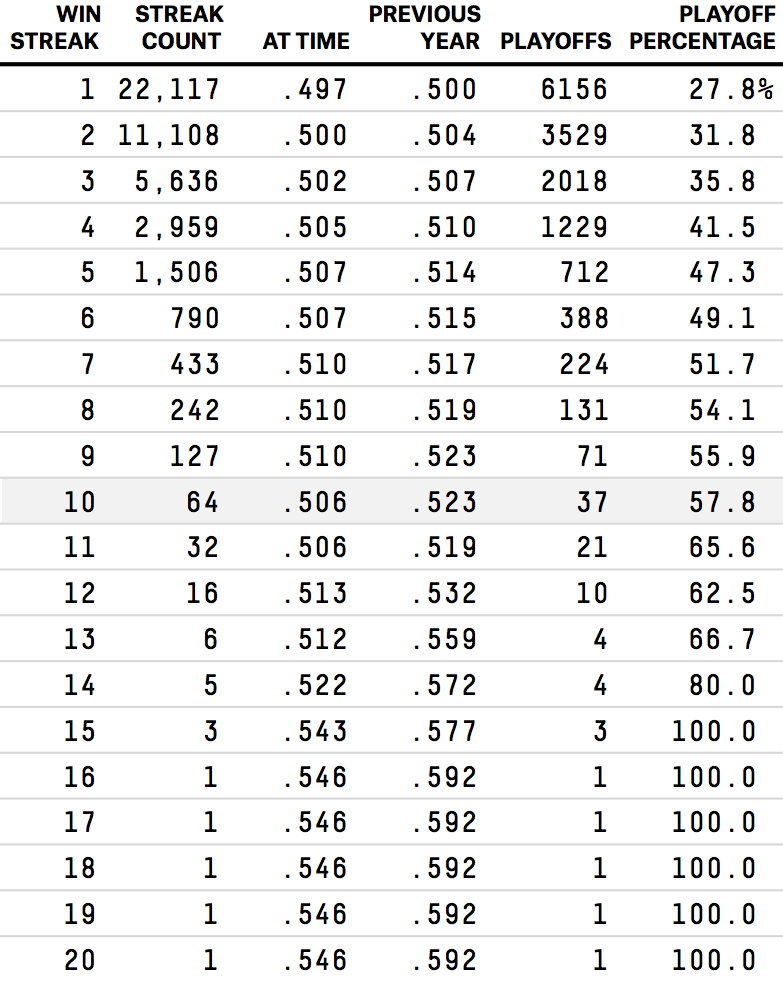 These playoff percentages mean that about 58 percent of all win streaks that passed through 10 games came from teams that eventually made the playoffs, a slight increase from before.

To determine whether these Royals could be a playoff team, we set up a logistic regression predicting make-the-playoffs odds from streak length, at-the-time regression winning percentage, and prior-season regressed winning percentage. This also helped us figure out how much of the chance of making the playoffs comes from the streak itself, and how much is just that good teams are more prone to run up these kinds of streaks. Causation versus correlation, basically.

After running the regression, it told us that the Royals are 23.2 percent less likely to make the playoffs than a normal 10-game-win-streak team because their record before the streak was 29-32, whereas the typical 10-gamer would have been 32-29. That looks like a very strong effect for just a three-game swing; we might be seeing a big inflection point here. At any rate, as you would expect, pre-streak record certainly matters.

Once we take their 10-win streak into account, the Royals have a little better than even odds of making the playoffs. Baseball Prospectus’s Playoff Odds Report gives KC a 42.3 percent chance of getting there. So if you want to peg the Royals somewhere around 50-50, that’s a decent place to start. And if you think about Kansas City’s roster — one with strengths but also significant weaknesses — that makes even more sense.

On the plus side, the Royals are an elite defensive team. According to Baseball Info Solutions’ Defensive Runs Saved stat, KC has fielded the second-best defense in the American League. By Ultimate Zone Rating, the Royals actually lead all of baseball, and by a wide margin. The outfield is particularly impressive: The combination of Jarrod Dyson and Lorenzo Cain has been extremely effective in chasing down fly balls in the gaps. Meanwhile, Alex Gordon has been a force of nature in left field, the best in all of baseball by pretty much any advanced metric. He’s pretty good by Fancy Plays Over Replacement too.

That airtight defense has made an already strong pitching staff look even better. Closer Greg Holland and righty setup men Wade Davis and Kelvin Herrera have combined to allow just one home run in 89 innings pitched this season.

Davis in particular has been a revelation. Acquired from the Tampa Bay Rays in the controversial December 2012 blockbuster, Davis was viewed as a throw-in, with James Shields and Wil Myers being the keys to the deal. After messing around with Davis as a starter last year, the Royals plopped him back into the role in which he excelled with Tampa Bay two years ago. So far this year, he has been right there with Sean Doolittle, Koji Uehara, Dellin Betances and one or two others for the title of best reliever in the American League. His season line: 31.1 innings pitched, 1.15 ERA, 52 strikeouts, and zero extra-base hits allowed.

The starting rotation has flourished lately, too. Shields has been steady as expected, though his numbers are actually down slightly from recent years. But he’s received ample support, from 23-year-old fireballer Yordano Ventura (who leads all KC starters in fielding independent pitching), free-agent pickup Jason Vargas (tops in innings pitched), and Danny Duffy (tops in beating long odds, having come back from Tommy John surgery, and at one point nearly quitting baseball entirely).

The big question revolves around the team’s offense. Just 13 days ago, the Royals sat in last place in the AL Central, and also last in the AL in slugging percentage, home runs and runs scored. Some of the team’s biggest slumpers came alive during the streak, especially Billy Butler and Mike Moustakas. Still, those players, along with talented but disappointing first baseman Eric Hosmer, have fallen well short of expectations in 2014, and KC still owns the third-lowest-scoring offense in the American League even after its recent explosion. The Royals almost certainly won’t be sellers any more at the trade deadline, not after this streak. Whether they’ll be buyers — to the point of possibly benching or jettisoning current players once viewed as future franchise cornerstones — remains an open question.

Still, it’s a great question to get to ask. After nearly three decades in the wilderness, the Royals now have a legitimate shot to see October’s spotlight. It’s about damn time.