The win percentage tracker, which was temporarily discontinued when we made some significant changes to our methodology a couple of weeks ago, has returned. I went back and ran simulations in weekly intervals using our current methodology, beginning with Sunday, March 2 and continuing through yesterday. From here forward, the win percentage tracker will be updated daily, just like the other charts and graphs. 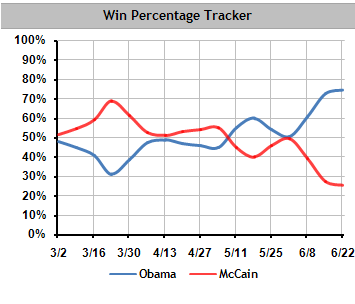 If we had been using our present methodology at the time, which is significantly more sensitive to momentum and trends, we might have had a different impression of exactly how vulnerable Barack Obama’s candidacy was to Jeremiah Wright, whose emergence was responsible for the dip into the low 30s you see in the chart in March. Whereas our original methodology had seen Obama’s low point coming around the 23rd of April, this makes it clear that it came somewhat earlier and was instead tied to Wright more specifically. Around this time, Obama had two polls come out showing him at least 6 points down in Ohio, two others come out showing him 9 or more points down in Florida, two more showing him 14-15 points down in Missouri, and he hit as low as -10 in the Rasmussen tracker. Obama was still getting some good results here and there in places like Wisconsin and the Pacific Northweset — and he recovered quite quickly after his “A More Perfect Union” speech — but it was rough sledding there for awhile.

By contrast, Obama’s present movement upward in the polls may have come somewhat sooner than we’d recognized. Although it has involved some fits and starts, by early May Obama had passed McCain and essentially hasn’t looked back.

EDIT: I also generated maps for each week using the new methodology, which are a lot of fun to look at — but I haven’t yet figured out a good way to present them. The various slideshow applications around the internet seem to have been designed for preteens with MySpace pages, and my functional knowledge of Javascript is basically nonexistent. If anybody has any good advice on how to set up some kind of interactive image viewer with a scrollbar or something similar, I’m all ears.