Before the end of last season, the St. Louis Blues were the most disappointing team in recent NHL history. In fact, they were among the most disappointing teams in recent North American sports history, period. They were almost always good, and they kept getting close to hockey’s summit — but they always seemed to fall flat when it mattered most. That all changed last June when the Bluenotes beat the Boston Bruins in the Stanley Cup Final, exorcising a half-century of hockey demons.

As Stanley Cup champions are wont to do, the Blues spent their summer partying. In total, Blues players brought the Stanley Cup on a 28,830-mile, multi-continent celebratory road trip. They even made time to stop at a dive bar in the St. Louis suburb of Brentwood, where they signed flip-flops and whatever else Blues fans threw at them. And why not? The Game 7 win was the final step in an extraordinary journey that saw St. Louis rise from last place in January to become champions by June. If any team earned a party, it was last season’s Blues squad.

But after all those celebrations and vindications, the Blues are now back in a familiar role: underdogs. According to preseason Stanley Cup odds provided to FiveThirtyEight by the betting sites SportsBetting.ag and BetOnline.ag, St. Louis is a 16-to-1 bet to repeat its title as it takes the ice Wednesday on the first day of the 2019-20 season. After adjusting for the vigorish, those odds imply a mere 4.5 percent Cup probability for the defending champs, which is tied with the Florida Panthers and Winnipeg Jets for the sixth-best odds of any team.

For a defending champion, a 4.5 percent chance of repeating is outrageously low. Using archived odds from SportsBetting/BetOnline for seasons since 2010, combined with moneyline data from Hockey-Reference.com for seasons from 1985 to 2009, we cobbled together over three decades of implied preseason Stanley Cup probabilities. And over that span, no defending champ has gotten less respect from the preseason bookmakers than these St. Louis Blues. 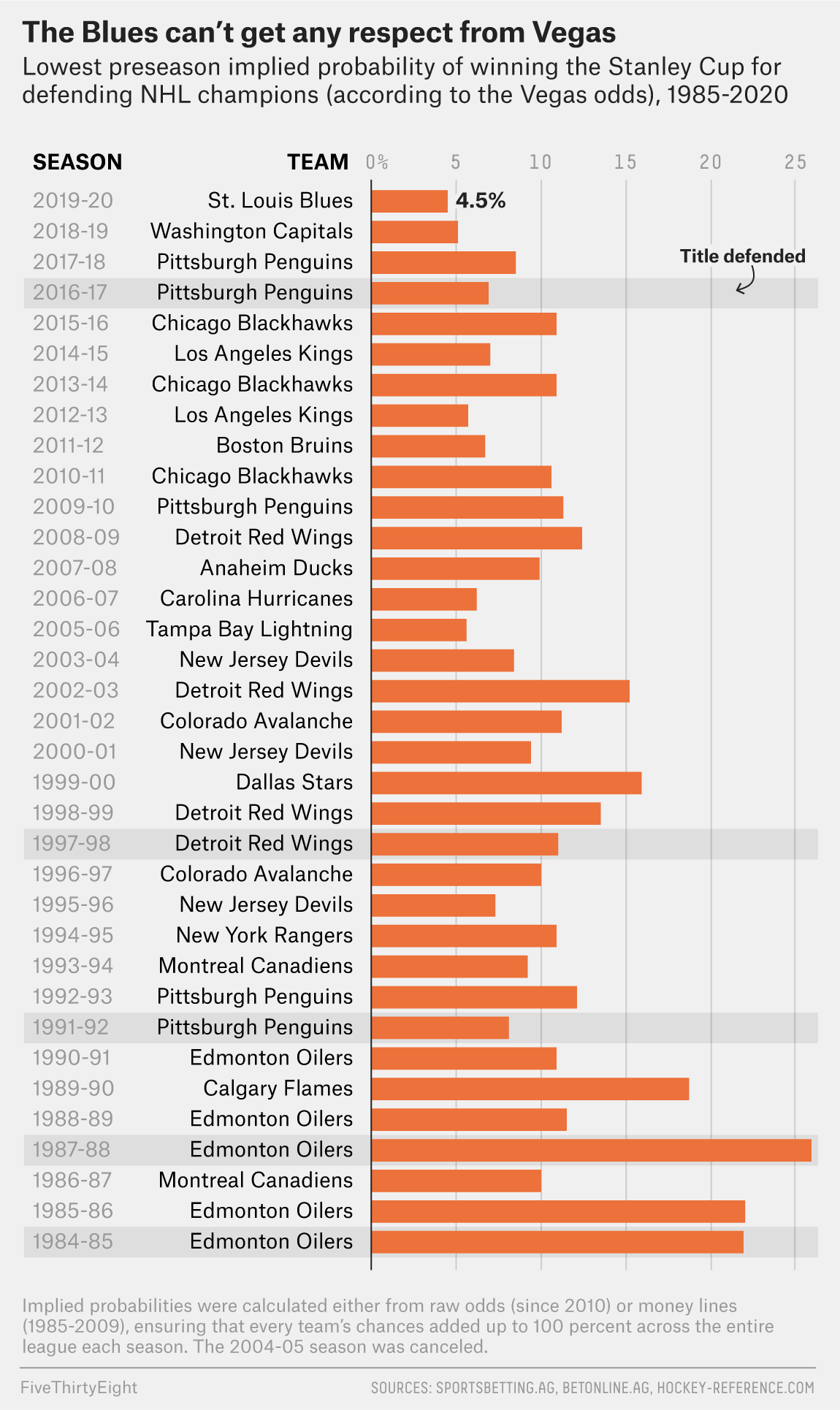 Some of that is probably connected to residual doubts over just how good the Blues actually were last season — and how much of their story was simply the Cinderella tale of a team getting hot at exactly the right time. According to Hockey-Reference, St. Louis’s Simple Rating System score — a metric that adjusts a team’s goal differential for its strength of schedule — was only +0.28 goals per game better than average, which tied the 2008-09 Pittsburgh Penguins for third-lowest among Stanley Cup champs since 1970, ahead of only the 2011-12 L.A. Kings and the 2017-18 Washington Capitals.

The team did make an effort to spruce up its roster over the summer. Just last week, St. Louis swung a trade with the Carolina Hurricanes for defenseman Justin Faulk, who ranked 29th among all blue-liners last season with 10.2 Goals Versus Threshold (GVT), a measure of value in terms of goals added and saved above a replacement-level player at the same position. The Blues gave up remarkably little to land such a big fish — in exchange for Faulk, they traded a prospect who hasn’t played an NHL game, a future seventh-round draft pick and defenseman Joel Edmundson.

Edmundson played in five Stanley Cup Final games for the Blues, but St. Louis will gladly forfeit that championship experience for a defenseman of Faulk’s pedigree. Edmundson’s GVT was just 3.6 in 2018-19, far below Faulk’s mark, and unlike Faulk, Edmundson doesn’t pose much of a scoring threat. In 269 career games, Edmundson has notched just 52 points, or just 0.19 points per game. Faulk, on the other hand, has scored 258 points in 559 career games, including 40 goals on the power play. Jettisoning Edmundson in exchange for Faulk also means that St. Louis will likely have to kill fewer penalties in 2019-20: In fewer than half the regular-season games played, Edmundson has racked up nearly the same number of penalty minutes as Faulk has.

Faulk should reinforce a defense that was already very good, Edmundson’s presence notwithstanding. Along with the Canes, the Blues gave up the third-fewest shots per game during the 2018-19 regular season, and along with the Arizona Coyotes, they gave up the fifth-fewest goals. And during the playoffs, only the Canes surrendered fewer shots per game among teams that played at least five games. The addition of Faulk to a blue-line group that already includes Jay Bouwmeester, Alex Pietrangelo and Colton Parayko makes the St. Louis rearguard one of the best in hockey.

Unlike many of the other teams on the list of unlikely repeat bids from above, the Blues didn’t lose a star.1 Still, aside from the addition of Faulk, they’re pretty much rolling with the same crew that won it all a season ago.

That might not be such a bad thing. The arrival of Faulk reinforces a clear strength for St. Louis, which is its depth — 13 Blues scored at least 10 goals last season. The Blues are also hoping for a repeat performance between the pipes from Jordan Binnington: The goalie led the NHL in goals against average during the regular season (allowing just 1.89 goals per 60 minutes). He was highly inconsistent during the playoffs, but if he can recapture his regular-season form, the Blues should find themselves in the playoffs again and with a chance to make another run at the Cup.

To be sure, the Blues probably have the right to feel a bit put out by the bookmakers’ preseason Stanley Cup odds. Repeating as champions is notoriously difficult — it’s only happened three times in the past three decades — but the Blues are returning a nearly identical roster, plus one of the league’s best young defensemen. And they’ve been the best hockey team on the planet since January, showing few signs that any sort of significant slump is on the horizon. The bookmakers don’t like the Blues’ chances this season. But then again, they didn’t like the Blues’ chances halfway through last season, either. And look how that turned out.