Every few months, one of the two national lotteries, Powerball or Mega Millions, surpasses a jackpot value that newscasters can’t ignore, crossing over from sideshow to news. Now that the Powerball jackpot has passed $250 million, we’re rapidly approaching that time again.

You know the beats: The lottery will show up on the 6 o’clock news, camera crews will hit up corner stores and film b-roll of customers buying lottery tickets, reporters will ask people on the street what they would do with the fortune, and hey, who knows, maybe someone will even bring a dashing young nerd on TV for a soundbite. Anchors will openly speculate about the possibility that this jackpot might be the big one, the one that rolls over so many times and finally becomes the first North American billion-dollar lottery. They will probably be wrong, but when has that ever stopped them before?

The next day it will be announced that there were two, maybe three winners. Then the lottery will reset to a jackpot amount that no longer qualifies as news — a measly $10 million or $40 million — and the cycle will start all over again.

Without necessarily knowing the odds, most reasonable people admit that the lottery is a pretty stupid way to spend money. I looked into this in an earlier piece at Business Insider: No matter how big the jackpot gets, buying a lottery ticket never becomes a good investment. But without fail, people buy tickets whenever it gets high enough.

What gives? If the cycle is so predictable — people buy a bunch of tickets when the jackpot passes a certain arbitrary value and it’s won shortly thereafter — can we actually, you know, predict it?

Clearly I can’t predict the lottery numbers. If I could do that, I wouldn’t be an Internet writer. But we can predict certain things about the lottery, particularly the probability that there’s at least one winner for a certain jackpot.

According to a model I developed based on past jackpots and participation rates, I estimate that there’s a 34 percent chance that at least one person will win the $257 million Powerball drawing Wednesday evening.

To find out why I can say this, let’s look at our two national lotteries.

In Powerball, players select five out of 59 numbers and then an additional number from 1 to 35. A player wins the jackpot when his or her ticket matches every number in the drawing. If there isn’t a winner, about a third of the weekly take is rolled back into the jackpot. If there is a winner, the jackpot resets at $40 million. The odds of winning the jackpot for a single ticket are one in 175,223,510. Tickets used to cost $1, but jumped to $2 in 2012.

Mega Millions, on the other hand, asks players to select five numbers from 1 to 75 and an additional number from 1 to 15. The jackpot resets lower — $15 million — and the odds of winning are a bit more remote — one in 258,890,850. Tickets cost $1, though, so participation tends to be higher.

That means we can figure out the odds of a winner — or winners — for any given lottery, and find out if lottery events are truly newsworthy. If everyone’s randomly1 selecting their numbers, every Powerball ticket has a one in 175,223,510 chance of winning, and we know how many tickets are bought, it’s just a quick use of the binomial theorem2 to find out the probability that one person, two people or more than two people win a given drawing.

Using data on drawings from LottoReport.com,3 I’ve plotted the number of tickets sold for every Powerball and Mega Millions lottery along with their advertised jackpots. You should observe a pattern. 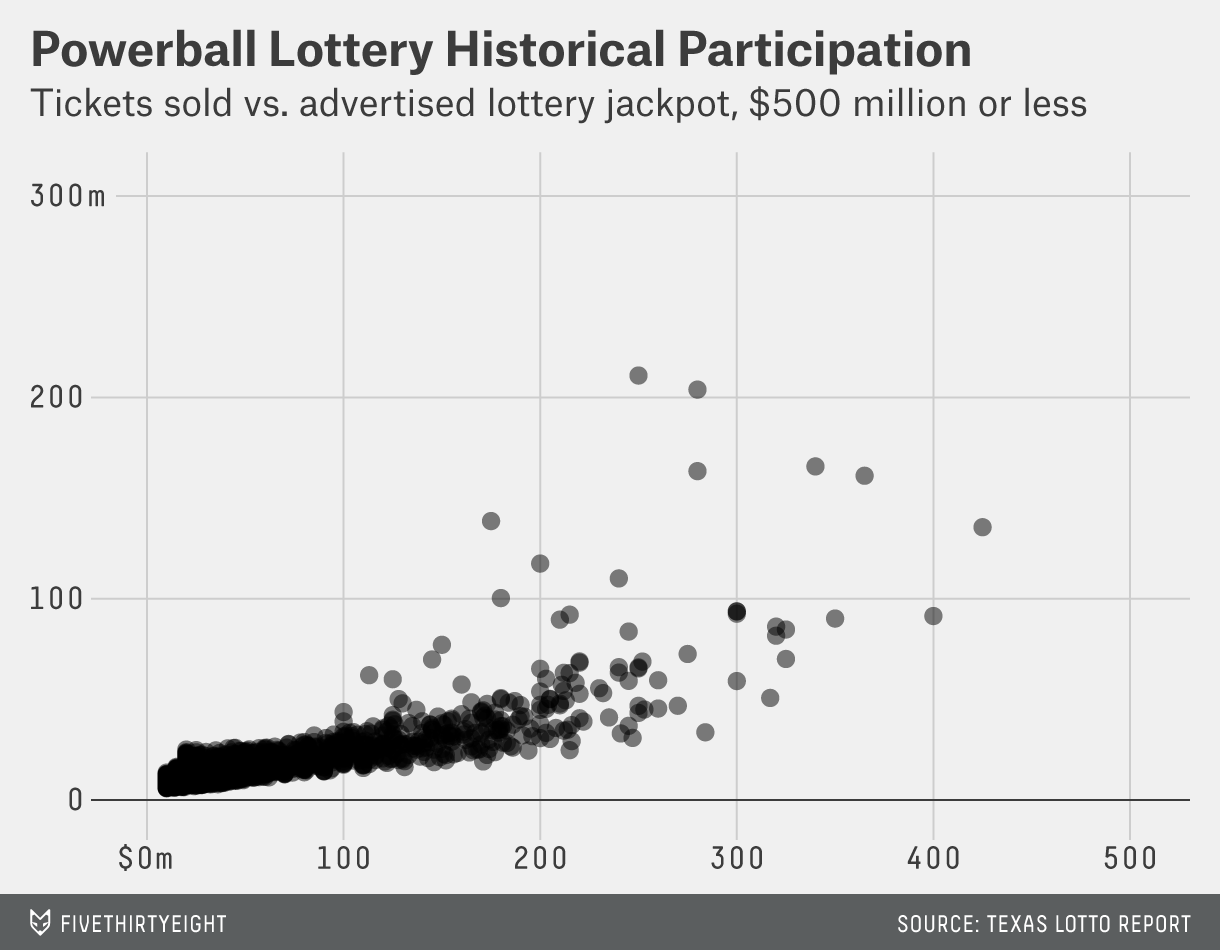 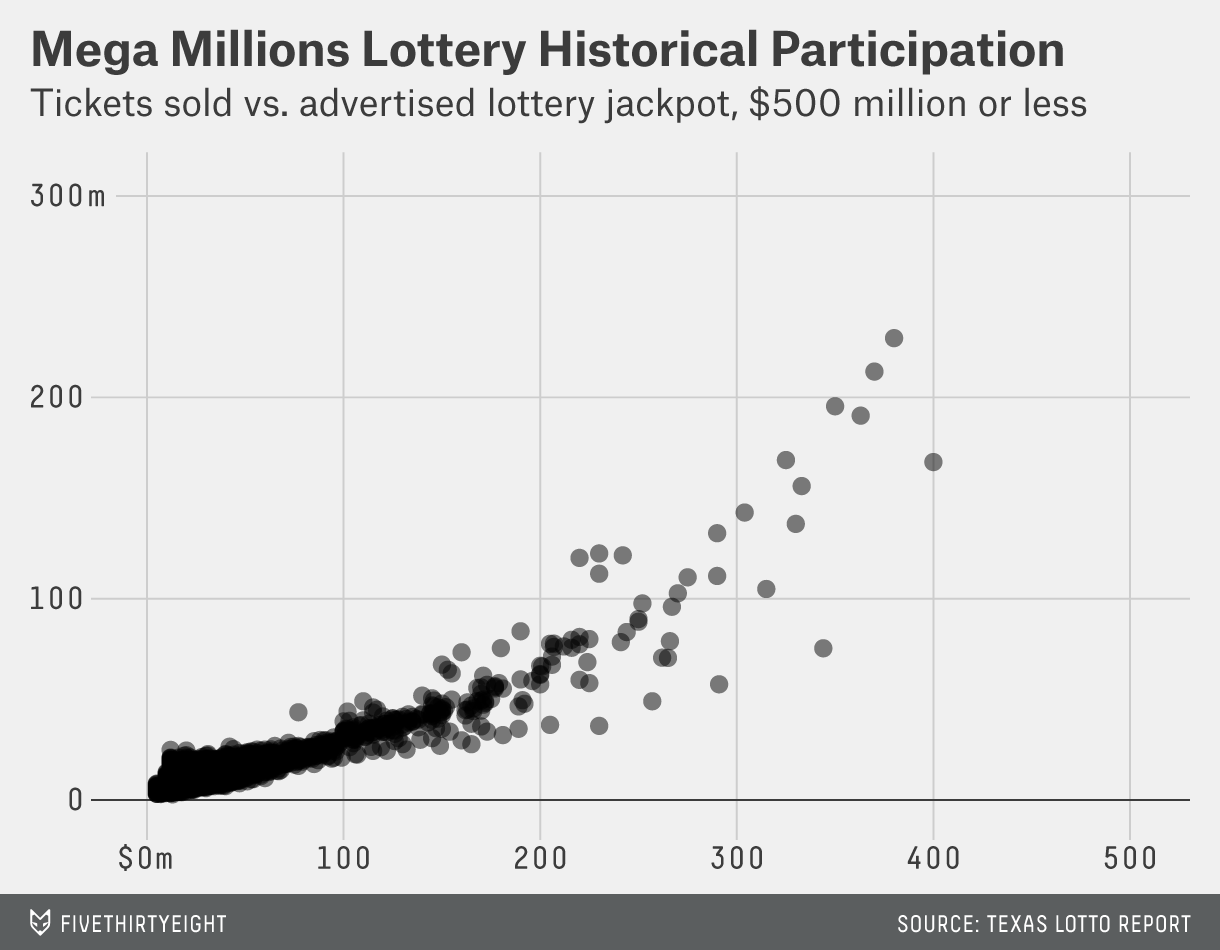 It’s pretty clear that there’s a distinct relationship between the amount of the jackpot and the number of participants in the lottery. Indeed, there appears to be an exponential relationship. Once a jackpot surpasses a certain value — somewhere around $250 million, give or take — the participation rate accelerates. (You’ll notice a clustering of dots in the lower left corner of each chart. That’s because both lotteries always reset to $10 million or $40 million and then grow very slowly in the initial weeks, so there are more lotteries at those levels.)

My personal theory is that the media coverage raises awareness about the lottery jackpot, compelling more people to play. Once participation begins to skyrocket, it becomes increasingly probable that there will be at least one winner of a drawing.

My colleague Andrew Flowers and I compiled a nonlinear fit — essentially a mathematical description of the relationship between two sets of data — to figure out the estimated turnout for each lottery given a certain advertised jackpot. 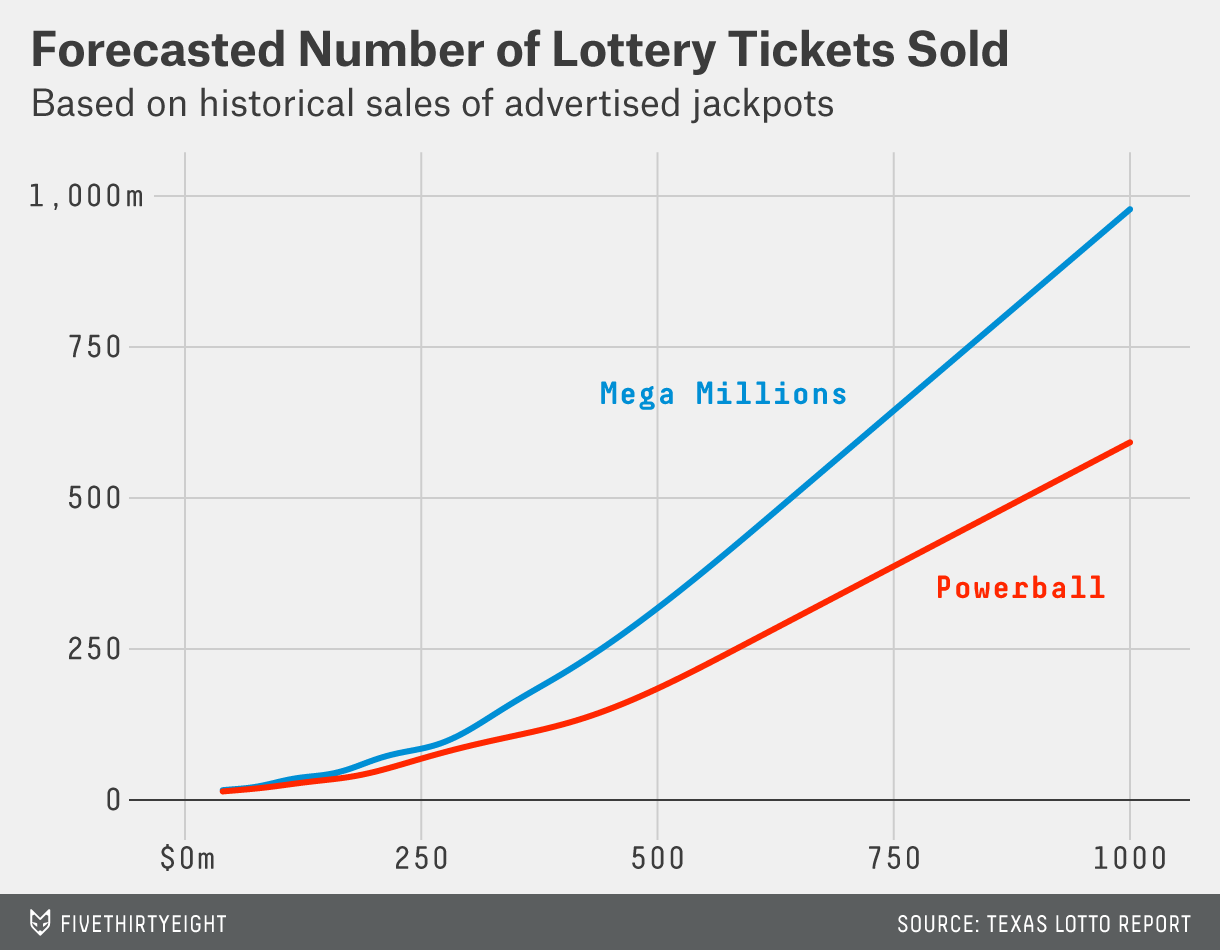 Keep in mind, the turnout estimates above $600 million are an extrapolation of trends, but we’ve had very few jackpots that large so it’s very possible that ticket-buying behavior in lotteries north of that figure could be quite different.

From there, we can figure out the probability that somebody wins the lottery. We just have to use our participation number, the knowledge that ticket-buyers randomly choose their numbers,4 and the odds of actually winning with any given ticket. Moreover, we’re also able to figure out the probability that there are exactly zero, one, two, three and so on winners for a given number of lottery participants using the binomial theorem.

The fruits of those calculations are below, in two charts, one for each lottery. A particularly interesting line to track is the probability of the “zero winners” line, which can be used to answer the basic question, “Will someone win the lottery tonight?” The other lines show the increasing odds of many winners, especially for big-ticket lotteries. 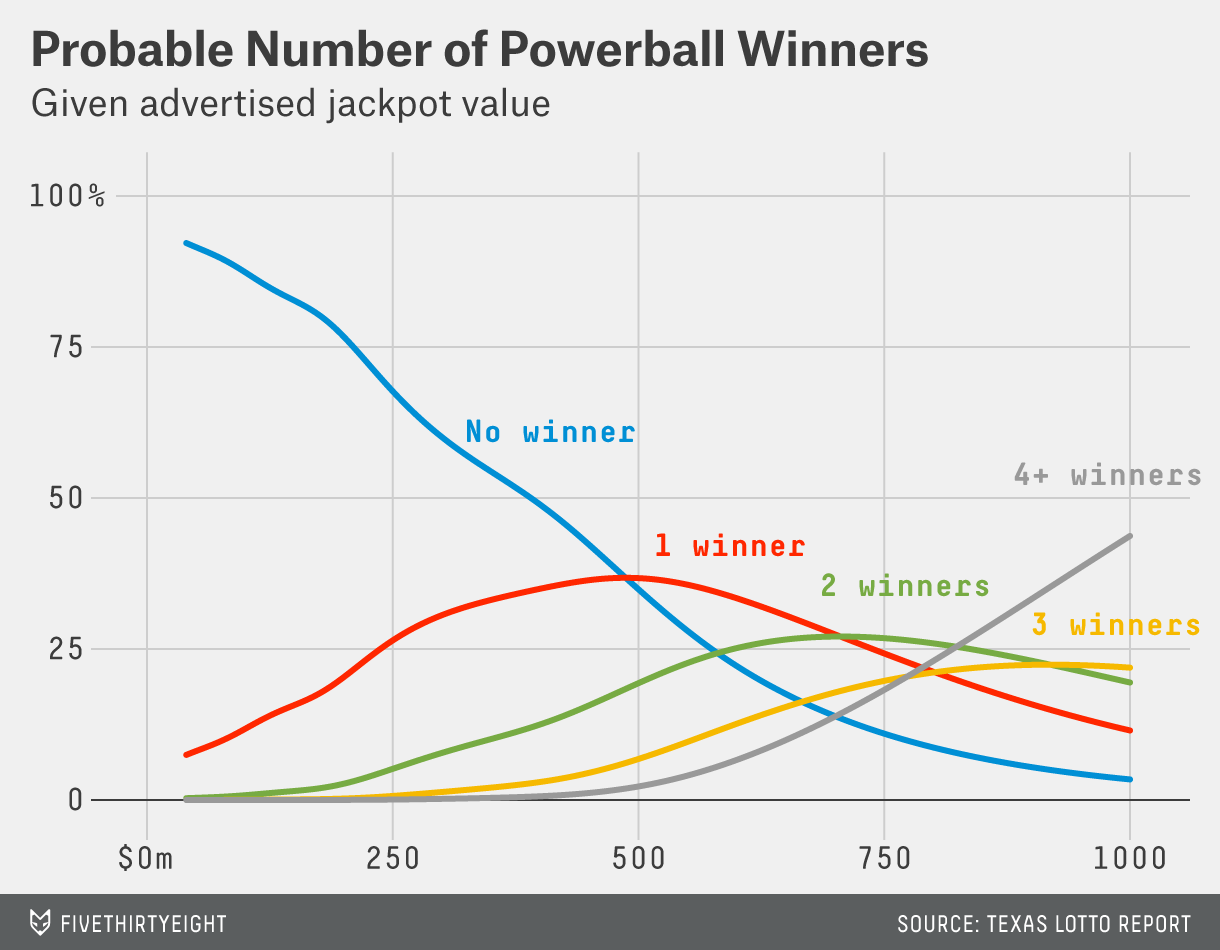 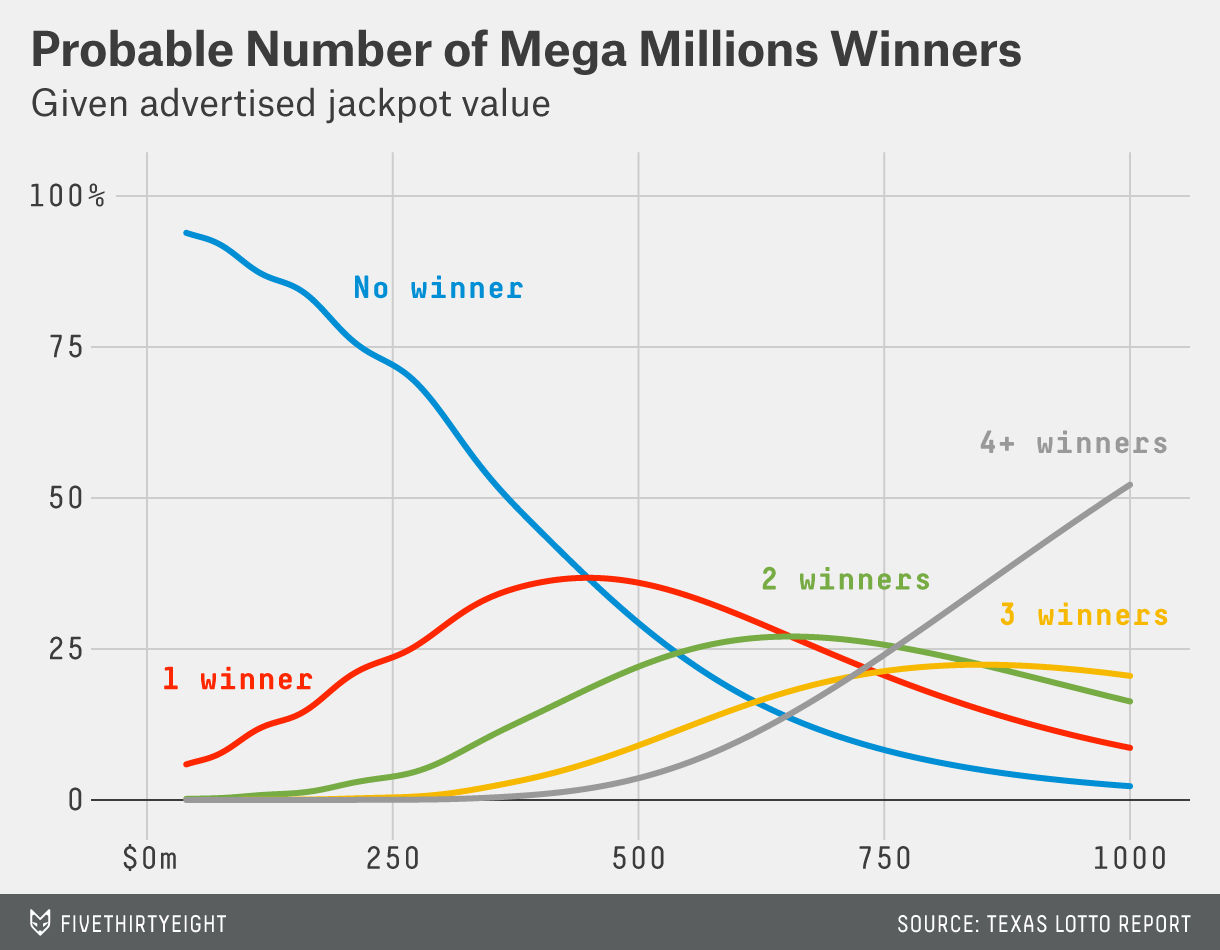 As the jackpot gets driven higher, it becomes increasingly likely that someone will win the lottery. And while that’s nice — people like to hear about lottery winners — it also prevents the lottery’s value from reaching new heights. If every time the lottery gets on the 6 o’clock news there’s a statistically probable winner — with the subsequent rollback to $40 million or $15 million — then we’ll never see a billion-dollar jackpot.