In Friday’s Washington Post, scholars Michael McDonald and Micah Altman published what amounts to a warning bell to open the 2010-2012 redistricting season. On one hand, they note, the process of drawing congressional (and state) legislative maps will be more transparent as ever by virtue of greater public access to redistricting data and the software to develop potential legislative maps; on the other hand, they warn, it needs to be even more transparent and encourage greater rates of public participation to prevent the kind of backroom politics that has long dominated the process of redrawing legislative lines. (You can read more about the effort to reign in excessive, behind-the-scenes gerrymandering by McDonald and his colleagues—an effort sponsored by a growing number of organizations—here, here and at the National Conference of State Legislatures redistricting resource page here. This link provides specific info about each state’s redistricting laws and procedures, and here you can learn more about a new documentary called “Gerrymandering” that premiered in Washington last month.) 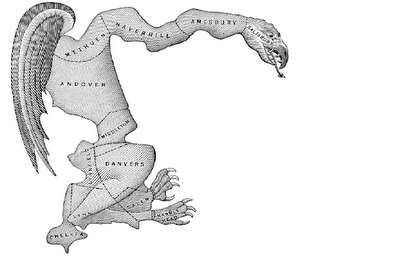 My first, cynical reaction? Yes, the redistricting process in each state will be more transparent than it was a decade ago—but no, and despite the earnest efforts of people like McDonald and Altman, there still won’t be the level of public attention and participation McDonald, Altman and their colleagues would like to see. As even they admit in the WaPo piece, a 2006 Pew survey shows that a vast majority of Americans simply have no opinion at all about redistricting; in my own experiences I have found that most people do not even realize that the process of drawing U.S. House maps falls to the respective state governments—and usually, more specifically to state legislatures—rather than Congress or some national authority.

Moreover, despite the lack of attention paid to how the 428 U.S. House districts in the 2000 round were carved out in the 43 American states—remember: seven states presently have only one, at-large and thus non-gerrymanderable seat—in general less public and media attention will be paid to the greater consequences redistricting has on the thousands of single- or multiple-member state legislative districts drawn in the 99 upper and lower chambers in the 49 bicameral states plus Nebraska. Indeed, because the state legislators elected from these oft-gerrymandered districts can in turn have significant input into their respective state’s redistricting laws and procedures, not to mention future mapmaking via those laws and procedures, in my opinion any real anti-gerrymandering war ought to first be waged over state legislative mapmaking, before turning to U.S. House mapmaking. I realize, of course, that the U.S. House gerrymandering will tend to attract greater national media attention.

Nevertheless, on the heels of the mid-decade gerrymandering activities led by Tom DeLay in Texas—which itself garnered a lot of national attention and led to the dramatic flight of Democratic state legislators from the state—2010 could prove to be a turning point. If information indeed wants to be free, and if web-based politics is good for anything, we could witness rising voter input and interest in this round of redistricting. I wouldn’t count on tectonic shifts in attention. And, frankly, I’m not sure if the continuing economic problems during the next two years will make Americans more attuned to redistricting battles, and may even make them less attentive. (It will be particularly interesting to see if tea partiers get involved in some of these state fights.)

As for the partisan control of current state congressional delegations, some states may be particularly ripe targets for Republicans, such as New York, where the Democratic delegation (26 of 29 seats) is lopsided even by blue-trending Empire State standards. Although the Massachusetts state legislature is overwhelming Democratic, Republican Scott Brown’s special election there might lead Republicans in the Bay State, which features the largest delegation, 10, of any state in the United States for which every House seat is controlled by the same (in this case, Democratic) party, to agitate for a fairer set of new lines. National Democrats might point to Florida as a state where the House delegation is arguably more Republican (15 to 10) than the state’s prevailing two-party balance.