Instead, it’s one about Kay Bailey Hutchison, the Texas senator, who today announced that it’s full speed ahead in her bid to challenge to Texas’ incumbent governor, Rick Perry. The news comes to absolutely no one’s surprise as Hutchison has been contemplating this race for years and long ago hired consultants and established a website toward her bid, while already having raised some $6.7 million dollars on behalf of it.

Hutchison once appeared to be the favorite in her primary fight against Perry, but it’s not clear if that’s any longer the case. The polling in this race has been a little bit sketchy, but seems to point toward momentum in Perry’s direction. After trailing in the five previous polls of the race (including internal polls conducted by his campaign and by Hutchison’s), Perry has pulled ahead in the last three: 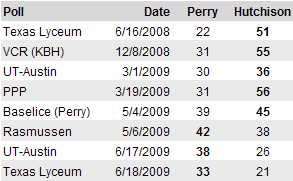 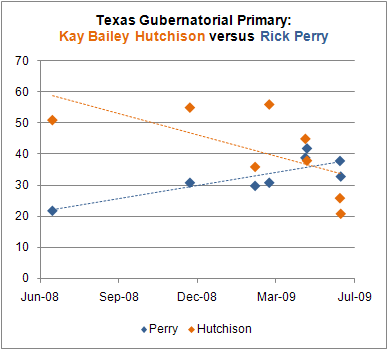 This should be a fun race to follow — especially if Sarah Palin, who seems to have a mutual grudge with Hutchison and has already endorsed Perry — gets further involved.

Perhaps the more interesting question for our purposes however is when and if Hutchison will resign her seat in the Senate to concentrate on her pursuit of the governorship. This would trigger a special election in which Democrats could be quite competitive. We have been alert to this possibility for some time now, which is why you see Texas included on our list of potentially competitive Senate races.

Ironically, we had just downgraded the race on speculation that the turnaround in the polling might deter Hutchison from pursuing the governorship after all. Obviously, we were wrong about that. But the fact remains that there’s nothing compelling Hutchison to resign her Senate seat until and unless she becomes governor. It’s her decision when and whether she wants to resign.

The smart bet, though, is that the resignation is coming (to the great annoyance of Hutchison’s colleague in the Senate, John Cornyn). For one thing, this is a pretty big prize that Hutchison is competing for: becoming governor of the nation’s second-biggest state. If Texas were to secede, it would have a larger GDP than all but eleven countries (the U.S., Japan, China, Germany, France, the U.K., Italy, Russia, Spain, Brazil and Canada). Hutchison would also become one of the most powerful female governors in history. Of the country’s five largest states, only Texas itself has ever had a woman governor (Ann Richards), and it’s population was about 25 percent smaller then. And of course, being governor of Texas is an obvious jumping off point for anyone with presidential ambitions.

Also, if Hutchison is losing momentum to Perry, that could cut both ways in terms of her desire to remain in the Senate. On the one hand, she might have more to lose by failing to hedge her bets. On the other hand, it might be precisely that bet-hedging that is getting her into trouble. Perry has been able to grandstand by doing things like threatening to have Texas secede and refusing to take federal stimulus monies. It is harder to capture that sort of attention when you’re one of 100 senators. And of course, Texans tend to be no fans of Washingtonians, which is how Hutchison might be perceived if she refused to give up her Senate seat.

Finally, even if Hutchison were to hold on to her Senate seat and win the governorship, she would not be able to punt the special election all the way until November 2012, when her Senate term naturally comes due. That is because Texas is one of a dozen states with a “fast” special elections law, meaning that an election in that case would be held in the Spring of 2011.

This does, however, give Hutchison some measure of control over the timing of the special election. If she were to resign soon, an election could be held this November. If she waited a little longer, it could instead be held in March. And if she kept her seat until the end of the year before resigning, the special election would be put off until November 2010. The conventional wisdom seems to be that the March timing would be most favorable to Republicans, since it would probably elicit the lowest turnout — a boon to the party in a state where base voters are still very red. We would put our money on Hutchison going ‘all-in’ sometime this autumn.