Democratic political committees have seen a decline in their fundraising fortunes this year, a result of complacency among their rank-and-file donors and a de facto boycott by many of their wealthiest givers, who have been put off by the party’s harsh rhetoric about big business.

The trend is a marked reversal from recent history, in which Democrats have erased the GOP’s long-standing fundraising advantage. In the first six months of 2009, Democratic campaign committees’ receipts have dropped compared with the same period two years earlier.

The vast majority of those declines were accounted for by the absence of large donors who, strategists say, have shut their checkbooks in part because Democrats have heightened their attacks on the conduct of major financial firms and set their sights on rewriting the laws that regulate their behavior…

Kane may well be right about the reasons for the decline. And maybe the Democratic committees will continue to struggle between now and next fall. But I suspect they will not be outraised when all is said and done–though I also doubt the Democrats’ advantage in the two-party share of all dollars raised will be as big as it was last cycle. 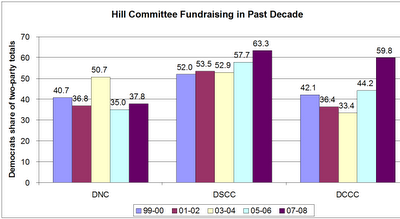 For one thing, keeping pace with last cycle may simply be too much to ask. The Democratic Senatorial Campaign Committee and Democratic Congressional Campaign Committee pummeled their Republican counterparts (the National Republican Senatorial Committee and National Republican Congressional Committee) in the 2007-08 cycle. As shown in the figure above, produced from FEC data reported here, the Dems’ two-party share of national party monies has tended to lag well below 50%/50% parity–with the exception of 2003-04, when super rainmaker Terry McAuliffe catapulted Democratic National Committee fundraising to unprecedented levels. The DSCC, meanwhile, has been very competitive over the past decade, basically keeping pace with the RNSC until 2007-08, when the DSCC broke out to a roughly 5:3 ratio. Likewise, though overall less competitive, the DCCC consistently hovered for most the past decade at around 40% of all fundraising, then busted loose in 2007-08. Given how unpopular George W. Bush and Republicans were then, the Democratic fundraising explosion of 2007-08 may simply be unsustainable.

The 07-08 cycle was also, of course, the first with the Democrats as the new majority party. Here’s Kane again:

The Democratic Senatorial Campaign Committee was considered the party’s best-run organization as it oversaw pickups of 14 Republican seats in 2006 and 2008. But through August, the DSCC had raised just $27.5 million, a drop of more than 25 percent, or $9.2 million, from the same point two years ago. While donations from special interest political action committees have increased, individual donors are disappearing at a rate that has alarmed party leaders: The DSCC’s contributions from individuals was $18.5 million through August, a drop of $12.6 million, or nearly 40 percent, from two years earlier, according to reports filed with the Federal Election Commission.

A midyear analysis by the FEC showed that the DSCC declines at that stage had come entirely from individuals who gave $10,000 or more, a small slice of overall contributors but a group that traditionally provides about half the committee’s fundraising total. Through June, those individual donors’ contributions had declined by more than 50 percent from 2007. The committee is running 12 percent behind its 2005 pace among large donors…

The National Republican Senatorial Committee, which has been pitching itself to conservative donors as the only check against Obama’s agenda, has stayed roughly even with the DSCC in overall receipts, and its cash flow is 30 percent ahead of its 2007 level…

House Democrats have seen donations to the DCCC drop 16 percent, with individual contributions more than 25 percent off their 2007 pace. But party leaders saw a 50 percent increase in small-dollar donations in August, after what they hope was a wake-up call to liberals who watched endless cable news footage of conservative protesters dominating town hall meetings.

There is still a year to go, and perhaps a more disparate advantage for the majority Democrats will yet emerge–although by using through-August totals, Kane is making the point that majority-party Democrats this cycle are trailing majority-party Democrats last cycle, in both absolute and (party)-relative terms. However, as the figure below shows, the declining relative performance of the Democratic hill committees may be offset somewhat by improved Democratic fundraising by the candidates themselves. 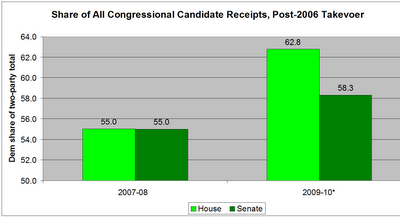 Created from reported FEC totals for last cycle and this cycle–again, both of which feature Democratic majorities in power in both chambers–you can see that the Democratic candidates’ two-party share of all monies raised is, for now* at least, well ahead of final 2007-08 splits. Among House candidates, the Democrats went from a 5:4 ratio last cycle to a 5:3 now; on the Senate side, the jump is smaller, from roughly 5:4 to 3:2.

These ratios may, of course, steadily regress toward parity in the next year, as Republican challengers win primaries or otherwise emerge. But the Democrats, by definition, know the identity of more of their putative candidates because they have more incumbents running who will, presumably, be re-nominated. And those incumbents enjoy ex ante fundraising advantages as incumbents. Sure, after 2008 there are more of them for operatives at the DSCC and DCCC to protect. But there are also more of them ringing the register. (And keep in mind that the GOP has more Senate seats to defend this cycle than the Democrats.)

A concluding point: Donors, institutional or individual, know how to read the tea leaves and they thus tend to hedge their bets when they believe the party in power stands to lose seats–especially if those seats losses have some chance of flipping majority control. We are almost assuredly seeing this hedging effect again…just as we witnessed during the 2005-06 cycle, when the Republicans still controlled Congress, yet there was a pretty decent spike (as evidenced in the first figure, above) in Democrats’ fundraising competitiveness at both the DSCC and DCCC in anticipation of the possibility of a Majority Leader Reid and Speaker Pelosi.

*The asterisk in the figure and text merely indicates that the 09-10 data reflect totals taken today, Sept. 29, 2009.