For all the turmoil in the country this year, our presidential election forecast has been remarkably stable. Dating back to June 1, the first date that we ran the forecast,1 only two states had flipped between Donald Trump and Joe Biden at any point: North Carolina and Ohio.2 On Wednesday, though, they were joined by a third state, Georgia, where for the first time all year, Joe Biden is the favorite — the ever-so-slight favorite! — in our forecast.

Look which state just turned blue in the snake.https://t.co/ajG88SznSA pic.twitter.com/sHnroFJKtS

Of course, it’s a bit silly to talk about states switching sides when FiveThirtyEight’s forecasts are probabilistic. With the addition of a new Quinnipiac University poll showing him 7 percentage points ahead there — more about that poll in a moment — Biden’s chances in Georgia rose from 46 percent to 51 percent. (They’ve since fallen to an even 50/50.) So a) that’s not really that big of a change and b) the race is tossup; Trump could easily re-emerge as the nominal favorite (turning Georgia red again in the snake diagram) by the time that you’re reading this.

In another sense, though, the shift in Georgia should come as no surprise. Consider:

And if Georgia is 7 to 10 points more Republican than the country as a whole, then you might expect it to turn blue with Biden having a 10-point lead in national polls, as he currently does. 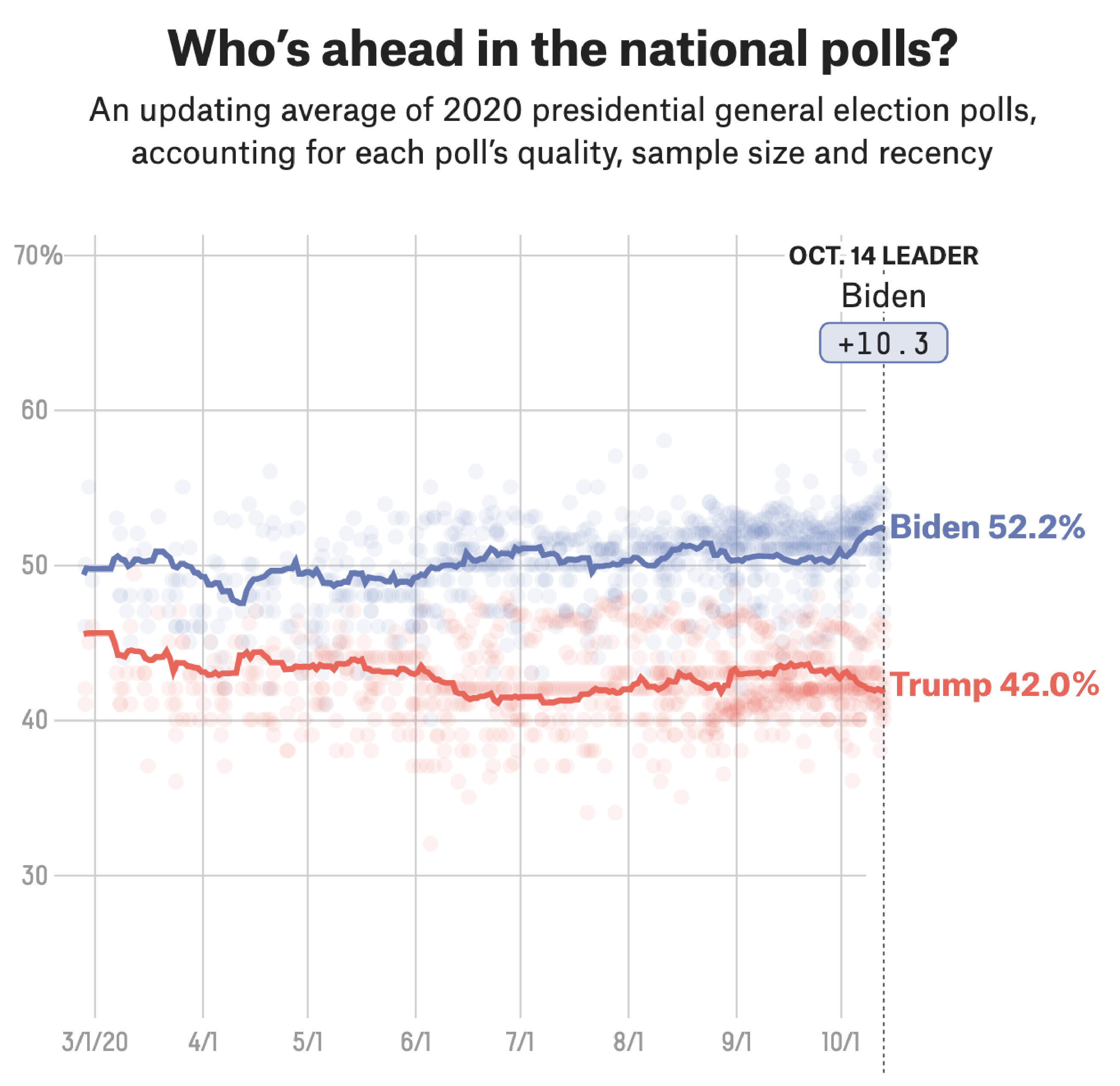 Our model has been a bit more skeptical about Biden’s Georgia chances, though, for a couple of important reasons. First, the state is relatively inelastic, meaning that it tends not to swing as much as the country as a whole does. That’s because there haven’t traditionally been a lot of swing voters in Georgia. Republicans have a base of conservative, religious, white voters; Democrats have a base of Black voters, plus younger white, Asian and Hispanic voters in Atlanta and in college towns. The Republican base has historically been slightly larger, though, so while Democrats could get to 45 percent or 48 percent or 49 percent statewide … 50 percent has been hard.

Second, Georgia has strict voting laws, and according to the Cost of Voting Index, a measure of how easy it is to vote in each state, those laws have gotten stricter since 2016. Our research shows that enacting stricter voting laws tends to hurt Democrats, too, which is factored into our estimates of the partisan baselines in each state.

So even as Atlanta’s suburbs have been shifting blue — leading to a win by Democrat Lucy McBath in the 6th Congressional District in the upscale northern suburbs of Atlanta in 2018 — these are still some fairly big hurdles for Democrats to overcome to achieve statewide wins. That’s why even though Biden had already been ahead in our Georgia polling average, our forecast — which also accounts for these other factors and also slightly discounts Biden’s current national lead — still had Trump slightly favored in Georgia.

Then came the Quinnipiac poll. What should you make of a poll that has one candidate 7 points ahead when everybody else has the race tied, or virtually so? Well, you should … throw it in the polling average. Generally speaking, it’s good when high-quality pollsters such as Quinnipiac are willing to deviate from the consensus; it means they’re not herding toward what everybody else says.

At the same time, Quinnipiac has produced perhaps the best set of numbers for Biden of any major pollster. Another recent release of Quinnipiac polls had Biden ahead by 11 points in Florida, 13 points in Pennsylvania and 5 points in Iowa, far better than the FiveThirtyEight averages in each state.

I’m not one to play poll doctor and dive into the crosstabs and declare whether a particular firm’s approach is right or wrong. Unless there’s something egregious, I think the right approach is to trust the process of averaging the polls. At the same time, a 7-point lead coming from Quinnipiac doesn’t mean quite the same thing as it would from a pollster like, say, Monmouth University, which has tended to show results for Biden that are near to or slightly worse than the consensus. (Monmouth’s most recent Georgia poll — taken before the debate — had shown Trump slightly ahead.)

How voting is going so far in 2020 | FiveThirtyEight Politics Podcast

Our model tries to account for all of these tendencies with our house effects adjustment; it accounted for the fact that Quinnipiac had previously shown Biden ahead by 3 points in Georgia, for instance, at a time when Trump was leading in our polling average there. Still, a 7-point lead for Biden was enough to impress our model, even coming from Quinnipiac.

Next question: Although Georgia could obviously go either way, could it actually be decisive in the election? In other words, could it be the tipping-point state, the one that nets Biden or Trump his 270th electoral vote?

That’s pretty unlikely: The model says there’s only a 2.4 percent chance that Georgia is the tipping point. That’s because if Biden has won Georgia, he’ll probably also have won at least one of its neighbors, North Carolina or Florida, where he has somewhat clearer leads in polls. And if Biden wins North Carolina or Florida, Trump is probably toast, with or without Georgia.

In theory, Georgia could matter if Biden completely collapsed in the Midwest: If he lost Michigan and Minnesota and Pennsylvania and Wiscosnin then Biden could still win the Electoral College by flipping Georgia and North Carolina and Florida while holding the other states that Hillary Clinton won. Again, though, we’re talking about some long-shot scenarios.

But where Georgia could be of great importance is in the U.S. Senate, where it actually has two races: a standard Class II Senate election between the Republican incumbent David Perdue and the Democrat Jon Ossoff, and a special election where the appointed Republican incumbent Kelly Loeffler is defending her seat against challengers from both parties. 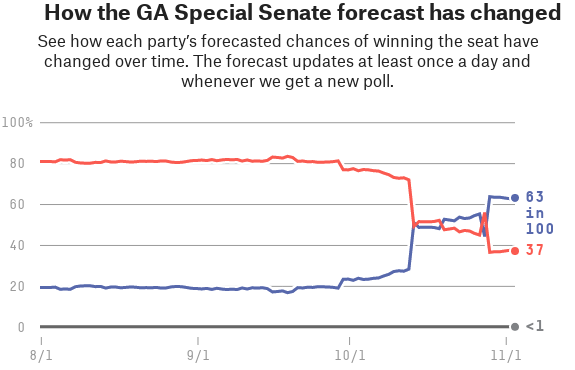 Recent developments have been favorable to Democrats in the special election, too. One Democrat — Raphael Warnock, the pastor at Ebenezer Baptist Church — has consolidated the large majority of the Democratic vote following endorsements from Barack Obama and other prominent Democrats. He is very likely to advance to the runoff, based on recent polls. Meanwhile, the second runoff slot is a bitter feud between Loeffler and another Republican, Rep. Doug Collins, who have been trying to outcompete one another by bragging about how conservative they are and how much they support Trump. This is potentially toxic messaging in an increasingly purple state where Trump isn’t that popular. And indeed, Loffler and Collins have fallen behind Warnock in some recent polls that test one-on-one matchups.

Our model tries to consider all of these complexities — as well as the likelihood that the environment might not be as favorable for Democrats in January as it is in November — and now has Warnock with a 50 percent chance of eventually winning, Loeffler with a 29 percent chance and Collins with a 21 percent chance. The other candidates, such as Democrat Matt Lieberman, have virtually zero chance.

In the regular Georgia Senate race, Perdue has a 72 percent chance and Ossoff a 28 percent chance, per our “Deluxe” forecast. There’s around a one-in-four chance that race will require a runoff, too, which could mean there could be two uncalled Senate until the runoff is held on Jan. 5. 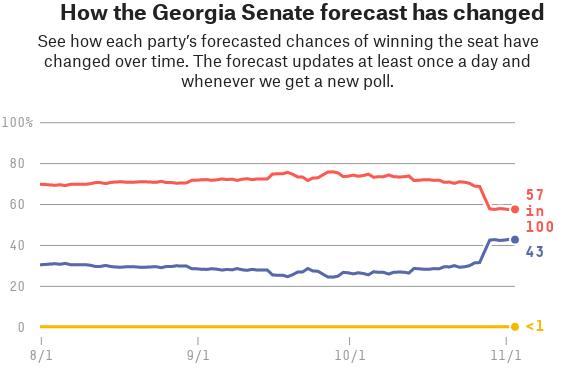 So there are certainly no sure things for Democrats in Georgia. But the fact that a formerly red state has become perhaps the most competitive battleground in the country is a bad sign for Republicans.