It’s rare that you see Markos Moulitsas and Erick Erickson agree on something, but they seem to be on the same page on at least this one issue: both would like conservative former Florida House Speaker Marco Rubio, and not soon-to-be-ex-governor Charlie Crist, become the Republican nominee for Florida’s Class III Senate seat in 2010. Nor is it clear that either Kos or Erickson’s strategies are incompatible. As I argued on Monday, while Crist would be much more likely than Rubio to win the general election, he is far enough to Rubio’s left that it might well be worth it for Republicans to gamble on Rubio rather than being stuck with Crist, who might vote with the Democrats on issues like cap-and-trade and illegal immigration.

The analytical trap we should probably avoid, however, is to assume that Florida’s primary electorate will resemble Pennsylvania’s, whose tendency toward extreme conservatism drove Arlen Specter from the Republican Party and has paved the way for a nomination for Former Congressman Pat Toomey. In contrast to Pennsylvania, Florida’s Republican primary electorate is relatively diverse ideologically and otherwise, although it contains its share of idiosyncrasies.

The table below compares two things: the composition of Florida’s electorate in the 2008 Republican presidential primary (where John McCain, with Crist’s endorsement, narrowly defeated Mitt Romney), and the composition of the pool of McCain voters in last year’s general election: 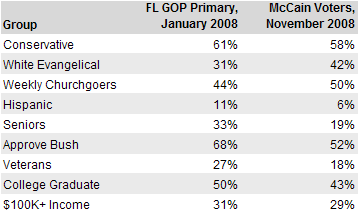 Sixty-one percent of Florida Republican primary voters, as compared to 58 percent of McCain voters nationwide, identified themselves as conservative. However, what these voters are not, by and large, are religious conservatives. There were significantly fewer white evangelicals in Florida’s primary electorate than you might expect — just 31 percent — and there was a smaller share of regular churchgoers than voted for John McCain in November. Only 52 percent of the January primary electorate described itself as pro-life, versus 43 percent pro-choice.

What Florida’s primary voters appear to be instead are security conservatives. A significant percentage of them — some 27 percent — were veterans. Thirty-five percent of them identified a national security issue — terrorism or Iraq — as being the most important to their vote, versus 26 percent of McCain voters in November (although, this may have been because the economy was in much worse shape by November than it had been in January). And, perhaps owing to the popularity of Jeb Bush, a significantly higher share of Flordia’s primary electorate still had warm feelings toward George W. Bush’s time in office.

As you might expect, Florida’s primary voters are also extremely old — nearly one-third were senior citizens — and significantly more Hispanic (mostly Cuban) than most Republican electorates. While the latter trait works in favor of Rubio, who is Cuban-American, Rubio is also just 37, and it might be asking a lot of seniors to vote for a candidate half their age given the presence of a “trusted” alternative like Crist.

If I were advising Rubio, I might tell him to make immigration his signature issue: just 29 percent of Florida primary votes wanted a pathway to citizenship for illegal immigrants, versus 40 percent who wanted them deported and 29 percent who favored a guest worker program. Since neither Crist or Rubio have any tangible foreign policy experience, immigration might be the closest Rubio can come to framing a security issue to his benefit.

The elephant in the room is whether the Rubio campaign — and obviously they’d need to do this very discretely — might try and make an issue of Crist’s sexual orientation, something which might receive renewed attention in light of a new film which alleges that Crist is a closeted gay man. Although, as we mentioned, Florida’s primary electorate does not contain a particularly high number of religious conservatives, it is quite old, and seniors are generally quite uncomfortable with the idea of homosexuality.

For Rubio to win, I think he’ll need at least two of the following three things, and possibly all three, to work to his advantage:

1) The ability to differentiate himself on a security issue — probably illegal immigration;
2) An endorsement from Jeb Bush;
3) The wild card of Crist’s sexuality to work against him, particularly among seniors, without backfiring on Rubio as it did to Tom Gallagher, Crist’s opponent in 2006 gubernatorial primary, who ran none-too-subtle homophobic ads against him and wound up losing by 30 points.