If recent history is any guide — probably not a big one.

So far, the evidence on whether there will be any post-Pennsylvania movement in the national tracking polls is mixed. Clinton has gained 5 points on Obama since Tuesday’s results were released in the Gallup tracker. Remember — that includes just one complete day of post-Pennsylvania interviewing, although Gallup noted that Obama was still ahead in their Wednesday sample. And in the Rasmssen tracker, Clinton has gained 1 point on Obama since Tuesday morning, although Obama actually inched upward versus yesterday’s results.

Below, I’ve provided a table listing the movement in the national tracking polls after other significant primary and caucus victories. This excludes Super Tuesday, arguably the most significant day on the calendar of all, since neither candidate emerged with undisputed bragging rights on that date. This compares the poll result released on the day of the primary to the first day when the entire sample consisted of post-primary data: that’s 4 days after the primary event for Gallup, and 5 days after for Rasmussen. 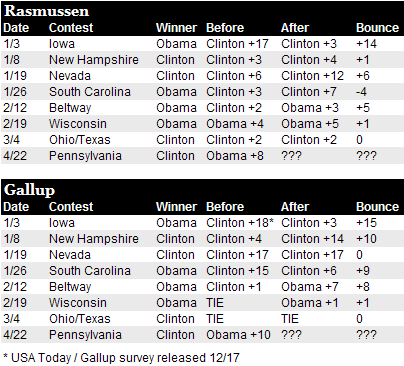 Iowa produced a large, double digit bounce for Obama — a result that was somewhat obscured by the results of New Hampshire, where Clinton got a big chunk of that back. But since then, the bounce has gotten smaller and smaller, to the point where there was no discernible bounce at all after either Wisconsin or Texas/Ohio. The moderate exception was the Beltway primaries of 2/12, which netted Obama 5-8 points, but that could have been noise or some sort of residual momentum from Super Tuesday, as it took a bit for it to dawn on the public consciousness that Obama come out with a pretty good day. But overall, this appears to resemble some sort of exponential decay function: 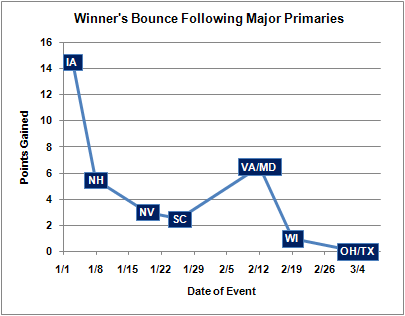 It wouldn’t shock me if Clinton got a couple of points out of Pennsylvania — although, in part, that’s because the tracking polls had been tending toward the high side of Obama’s range before. But I somewhat doubt that Pennsylvania on its own will be enough to get Clinton the 5-6 point bounce she needs to win the plus-Florida popular vote count, much less the 12-point bounce she’d need to win the “Best Obama” popular vote count. She’ll need to find a way to parlay her Pennsylvania success and continue to win news cycles in order to achieve those goals.