Ask yourself the following: is momentum a good thing or a bad thing?

One of the more persistent trends in the United States’ postwar economic history is that the volatility in the performance of the economy has decreased over time. For example, from 1948 through 1969, the median change in the real GDP growth rate from one quarter to the next was 4.0 percent. Since 1987, however, it has been just 1.8 percent. A similar, although slightly less dramatic trend can be observed in the behavior of the unemployment rate. The economy, over time, has become increasingly sticky, stubborn, robust, stable, or whatever synonym you prefer. It has more inertial momentum than it once did.

Decreased volatility — momentum — is generally thought of as a Good Thing. And it is a Good Thing — if the economy is expanding.

Right now, however, the economy is not expanding — it is contracting. And when the economy is contracting, reduced volatility may be an altogether different thing. It may mean that contractions are longer as well. Take a look, for instance, at Justin Fox’s graph at Time.com about the behavior of the unemployment rate over the past six recessions: 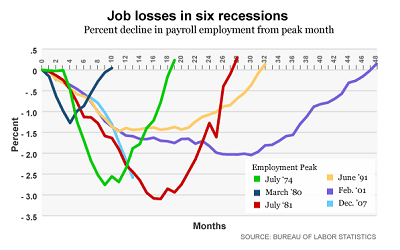 Months Required for Employment Rate to Return to Prior Peak

You don’t particularly see this trend, by the way, if you look at other measures of economic performance, such as GDP growth. However, as we transition into a post-industrial economy, there is less relationship between employment and GDP than there used to be. (The intuition, I suppose, is that labor is relatively less important as a factor of production than it once was). 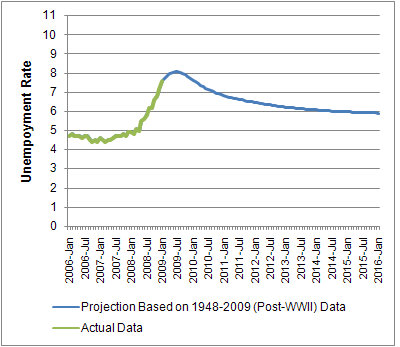 This has the unemployment rate peaking over the summer at 8.1 percent before starting to decline; most economists would consider that to be a pretty decent result. (By the way, even though this is an extremely unsophisticated model, it is not necessarily out to lunch in thinking that the equilibrium unemployment rate will be in the high 5’s rather than numbers like 4.0 that we are used to. The unemployment rate has never fallen below 5.0 in three of the last five economic expansions, and the average unemployment rate achieved during expansionary periods is generally quite a bit worse than the best (lowest) unemployment rate.

Now suppose instead that we perform the same process based solely on data from the Greenspan Era — from August 1987 onward. This gives us a rather different result: 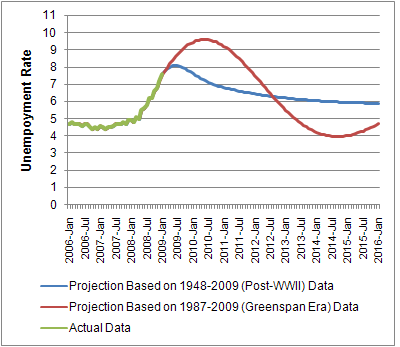 Here, the unemployment rate gets all the way up to 9.6 percent, and doesn’t peak until May 2010 — more than a year from now. If this projection is accurate, the economy might exit the recession somewhat sooner than that — employment tends to be a lagging indicator — but it won’t be without a lot of suffering in the intervening months. The Greenspan Era data also seems to posit some periodicity in employment rates — that is, the presence of business cycles — but with superlong periods lasting for perhaps as long as 10 years. Perhaps the business cycle hasn’t been eliminated so much as it has been extended. Momentum is a Good Thing if you’re driving down the highway — but a Bad Thing if you’re driving off a cliff.

Now, there are much, much more sophisticated ways to do economic forecasting than this. My point is simply that some of the same things that might have been working in the economy’s favor before could be working against it now. We have developed good tools for preventing recessions — but this makes the fact that those tools are not working all that much more troublesome.