A poll released on Tuesday by Marist College shows former Representative Anthony Weiner running in second place in the Democratic primary for mayor of New York. Mr. Weiner has 15 percent of the vote, behind Christine C. Quinn, the City Council speaker, at 26 percent.

Some poll-watchers are citing the survey as an encouraging one for Mr. Weiner, who has told reporters that he is considering entering the mayor’s race. But in my view, a more careful examination of the poll results — and a consideration of the 40 percent runoff rule that New York will apply in its primary — should yield the conclusion that Mr. Weiner’s chances are remote.

The Marist poll asked Democrats not only about their first choice, but also whether they recognized the names of each candidate and whether they viewed them favorably. Evaluating this evidence is important because voter choices are not likely to be very firm at this point. The primary will not take place until Sept. 10, and only 40 percent of the Democrats in the poll said they were following the race closely or very closely. Advertising and news media coverage of the race has been scant, and so less familiar candidates will have a chance to improve their name recognition. And the poll was a survey of registered voters, rather than those who said they were likely to participate in the primary.

In the chart below, I’ve combined the poll question on Democrats’ first choice with one on name recognition and favorability. This allows us to break prospective voters’ views of each candidate into four categories. 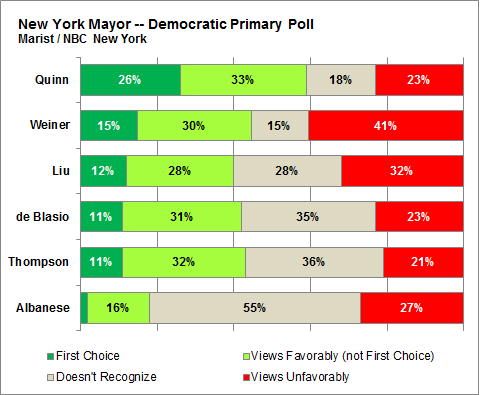 First are the Democrats who currently list the candidates as their first choice. Mr. Weiner, as I mentioned, ranks second in this category, behind Ms. Quinn, and just ahead of John C. Liu, the city comptroller; Bill de Blasio, the city’s public advocate; and William C. Thompson Jr., the former city comptroller, who won the Democratic primary in 2009.

Next are the Democrats who recognize the candidate and view him favorably, but do not have him as their first choice. These voters represent the easiest opportunity for each candidate to pick up additional support. Mr. Weiner, for instance, is viewed favorably by 45 percent of Democrats over all, and 15 percent have him as their first choice, meaning that 30 percent of Democrats have a favorable view of him but are not supporting him yet. The other four leading candidates also have about 30 percent of voters falling into this category.

The opposite is Democrats who already take an unfavorable view of a candidate. This is the most problematic category for Mr. Weiner, because 41 percent of Democrats view him unfavorably, far more than for any of the other candidates. In general, it is extremely difficult for a candidate to flip voters into being supporters once they have already established a negative view of him — especially in the midst of what is likely to be a nasty and contentious primary. Thus, the more Democrats fall into this category, the harder it will be for a candidate to add support.

Provided that a candidate has sufficient resources to run a viable campaign, these name-recognition deficiencies are likely to be minimized by Election Day. As a corollary, candidates with limited name recognition have more room to grow, while those with the strongest name recognition may be overrated by early polls. (Consider the case, for example, of Donald Trump, who briefly led Republican presidential primary polls in 2011 at a time when the rest of the field was fairly anonymous to voters.)

In our analysis of presidential primary polls, we have found that adjusting early polls for name recognition generally yields more useful predictions than taking the numbers at face value. I have conducted a version of this analysis in the chart below, removing the poll respondents who did not yet recognize the candidates and reallocating the others among the remaining three categories. 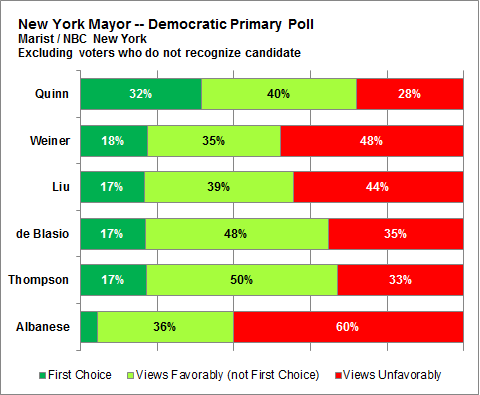 This yields a somewhat different view of the race. Ms. Quinn remains the front-runner: 32 percent of Democrats who recognize her name have her as their first choice. But then we have what amounts to a four-way tie for second — with Mr. Liu, Mr. de Blasio and Mr. Thompson gaining ground on Mr. Weiner. For each of these candidates, including Mr. Weiner, between 17 and 18 percent of voters who recognize their names have them as their first choice.

Of these four candidates, Mr. Weiner has the least room to grow, because nearly half of voters who recognize his name view him unfavorably. Mr. de Blasio and Mr. Thompson, by contrast, have more upside potential. Just as easily, Ms. Quinn could extend her lead, as her favorability ratings are the strongest even accounting for her strong name recognition.

But what if Ms. Quinn’s campaign goes poorly? Is it so impossible to imagine Mr. Weiner winning a plurality with perhaps 30 percent of the vote if support winds up being divided four or five ways?

It isn’t — but it also wouldn’t make Mr. Weiner mayor, or even the Democratic candidate. That’s because New York applies a runoff if no candidate receives more than 40 percent of the vote in the primary.

This is where the unfavorable views that many Democrats hold of Mr. Weiner would hurt him most. In a multicandidate race, it might be possible for a candidate to emerge with the plurality, even if many voters dislike him, so long as he turned out his loyal supporters. But the math becomes nearly impossible for a candidate in a two-way race when half of the voters who recognize his name dislike him. Mr. Weiner would be a huge underdog in a runoff against Ms. Quinn or one of the other major candidates.

There are a couple of qualifications to this. First, Mr. Weiner is quite likely to receive a disproportionate share of news media attention, and perhaps he is a skilled enough politician to rehabilitate his image with some voters. Second, we are in the midst of building a database of past New York mayoral polls, which should allow us to draw more direct lessons from past campaigns, rather than making inferences from presidential and Congressional primaries.

Nevertheless, the Marist poll contains poor news for Mr. Weiner, on balance. Most of his second-place standing comes from his name recognition. And because many New Y
orkers will not consider voting for him, he will need to convert an unusually high percentage of those who still might.