Here’s a surprise: the stock of American International Group (AIG) was one of the leading performers on Wall Street today, gaining some 66 percent to close at $0.83 on extremely heavy volumes. 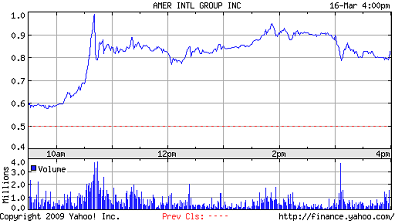 The stock gained 11 cents (22%) on the opening tick this morning, perhaps partly in response to Ben Bernanke’s comments to “60 Minutes” in which he suggested that the experience of Lehman Brothers had taught him that some companies (presumably including AIG) were indeed too big to let fail. But the larger part of the gains came later in the day, especially between 10 and 11 AM, just as the public outcry over payments of some $165 million in bonuses to executives in AIG’s financial products unit appeared to be gaining steam.

This seems, at first, like rather unusual behavior for the stock. The fact that the story about bonus compensation caught so much political fire today (it wasn’t really news; AIG stated on January 27 that it would pay the bonuses as originally planned) would seem like bad news for AIG’s remaining private shareholders, as it substantially deceases the likelihood that the government will provide further assistance to AIG without continuing to dilute them.

One interpretation, however, for the sharp increase in the stock price (although I doubt it’s the only one and don’t know if it’s the best one) would rest on the following two assumptions. Firstly, the public outcry today makes it more likely that the government will find some mechanism to enable AIG to break what it says are contractual commitments to pay the bonuses; and secondly, that failing to pay the bonuses is a good bottom-line business decision.

The first assumption probably isn’t controversial, but the second one might be. I have quite a bit of sympathy for Megan McArdle’s argument: the fact that AIG as a whole performed very, very (very, very) badly doesn’t mean that some individual employees didn’t perform fairly well. In general, we tend to overestimate the correlation between the performances of individual employees and the performance of a firm; to employ a baseball analogy, the fact that the Atlanta Braves were awful last year does not mean that Chipper Jones didn’t have a great year. AIG didn’t fall to pieces because all of its individual employees and executives just so happened to have an off year; it did so because of far more fundamental and longstanding flaws with certain parts of its business model, perhaps enabled by a lack of appropriate government regulation. (To be certain, the same phenomenon works in reverse, with individual employees tending to get too much credit in years where a firm performs well).

The performance of AIG’s stock today, however, calls into question the notion that permitting unchecked executive compensation is a necessary evil for getting AIG and other financial institutions back on their feet. It wasn’t just AIG’s share price that was up today, by the way; Citibank was up 31%, Fannie Mae 29%, and Freddie Mac 21%. Is Wall Street implicitly endorsing executive pay caps for these troubled companies?

Nevertheless, as today’s festivities probably increase the likelihood that any future bailout actions will be conditioned upon restrictions on executive compensation, the fact that the stocks of the companies which are most likely to be the targets of those bailouts all performed well today may be telling. Or it may not be. But it is far from clear that extremely high levels of executive compensation ultimately benefit the shareholders of the companies that those executives manage, let alone the economy as a whole.