With voters unconvinced by each of the major UK parties and their leaders and with third and fourth parties only seriously competitive in a handful of seats beyond those they already carry, political observers in the UK have been questioning the level of turnout for 6 May’s voting.

The highest national turnout in recent years in the UK was the 1992 election, which concluded with a win for the Conservatives. With 77.7 percent turning out to vote, the Tories pulled 42.3 percent of the national vote, earning 336 of Parliament’s 651 seats, while Labour won 271 constituencies.

Since then, national turnout has gone from bad to worse. In Labour’s 1997 landslide, just 71.4 percent showed up to vote, the lowest since 1935. But this was small compared to the major drop in participation that occurred during the 2001 election, when less than 60 percent of voters cast their ballots.

In Conservative-won seats in the 2001 election, when the big turnout drop occurred, turnout was relatively consistent throughout, with quite heterogeneous majorities. 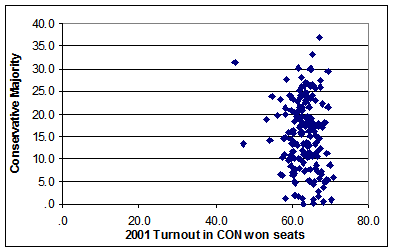 Besides the main zero slope cluster, there was also a group of seats on the upper edge of conservative support where increased turnout resulted in higher majorities. 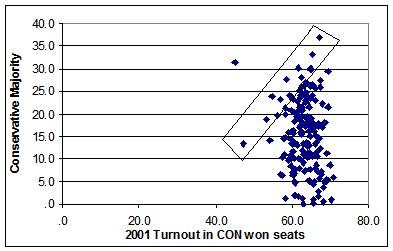 For the Lib Dems, it was a similar pattern. In short, the party’s majorities were independent from turnout. 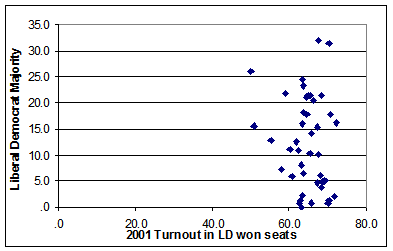 However, in constituencies won by Labour, a different pattern emerged. 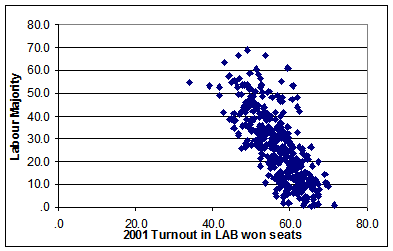 In Labour constituencies in 2001 — the same seats they won in the Blair landslide of 1997 save 5 extreme marginals lost — the relationship between turnout and victory margin is stunning. Basically, in safe Labour seats, fewer people showed up to vote — knowing that Labour would win nonetheless. In particular, you would guess, Conservatives, who were demoralized from the 97 loss.

However, when you look at the change in turnout against the seat swing (Con to Lab swing) in Labour won seats, this trend does not come through. 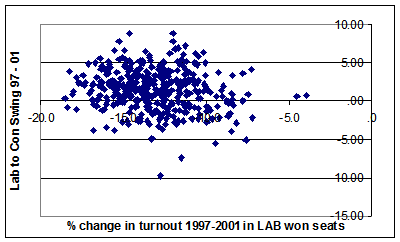 In short, it appears that in Labour seats from 1997, both Conservative and Labour voters became disenchanted — a significant number of Labour voters who were caught up in the Tony Blair furor sat out the 2001 election, while Conservative voters who were certain that they could not win in safe or relatively safe Labour constituencies also stayed home.

There are 4 reasons that this is important to us this election season:

1. Demoralized voters from 2001 and 2005 may choose this election to make a comeback. Polling numbers are showing 10-20 percent undecideds, and significant number of these voters did not vote either in 2001 or 2005. These voters could either stay on the sidelines or decided to come back in the mix. However, given that both Labour and Tory voters left the electorate in 2001 and 2005, it will be a matter of which party can motivate more of their former base to return, something that should favor the Conservatives.

2. Labour middle marginals — the ones the Tories need to win in order — have relatively low turnout. In the middle marginal Labour seats, where low turnout has dominated the last several elections, a new influx of voters could push the overall totals 3-5 points in either direction, which could be enough to win. Particularly the seats that used to be quite safe for Labour going into 2001 and 2005.

3. Polling numbers tend to favor the most committed voters. The polls that we have seen so far have had relatively stringent likely voter screens (generally, only 10 out of 10 certain to vote respondants have been included), meaning that we are not really sure of how returning voters may react.

4. Labour seats with 30+ leads will still see quite low turnout. For the reasons said above, the safest of Labour’s seats will undoubtedly still get quite low turnout, and big margins of victory. This will have similiar implications for national popular vote numbers, and associated polling that precede them.