With an impeachment trial ongoing and the Iowa caucuses taking place the day before, President Trump’s third State of the Union address has flown under the radar in a very busy news cycle. (In case you missed the memo, the speech takes place at 9 p.m. Eastern tonight.) But maybe that’s not entirely a bad thing: The State of the Union probably gets more attention than it deserves, given its low political stakes.

First, presidents usually take the State of the Union as an opportunity to make policy proposals and urge Congress to pass them — but most of the time, they are unsuccessful. Political scientists Donna Hoffman and Alison Howard track the number of policy requests that presidents make in their State of the Union addresses,1 and they found that the president’s annual speech to Congress featured an average of 33 policy proposals from 1965 to 2019.2 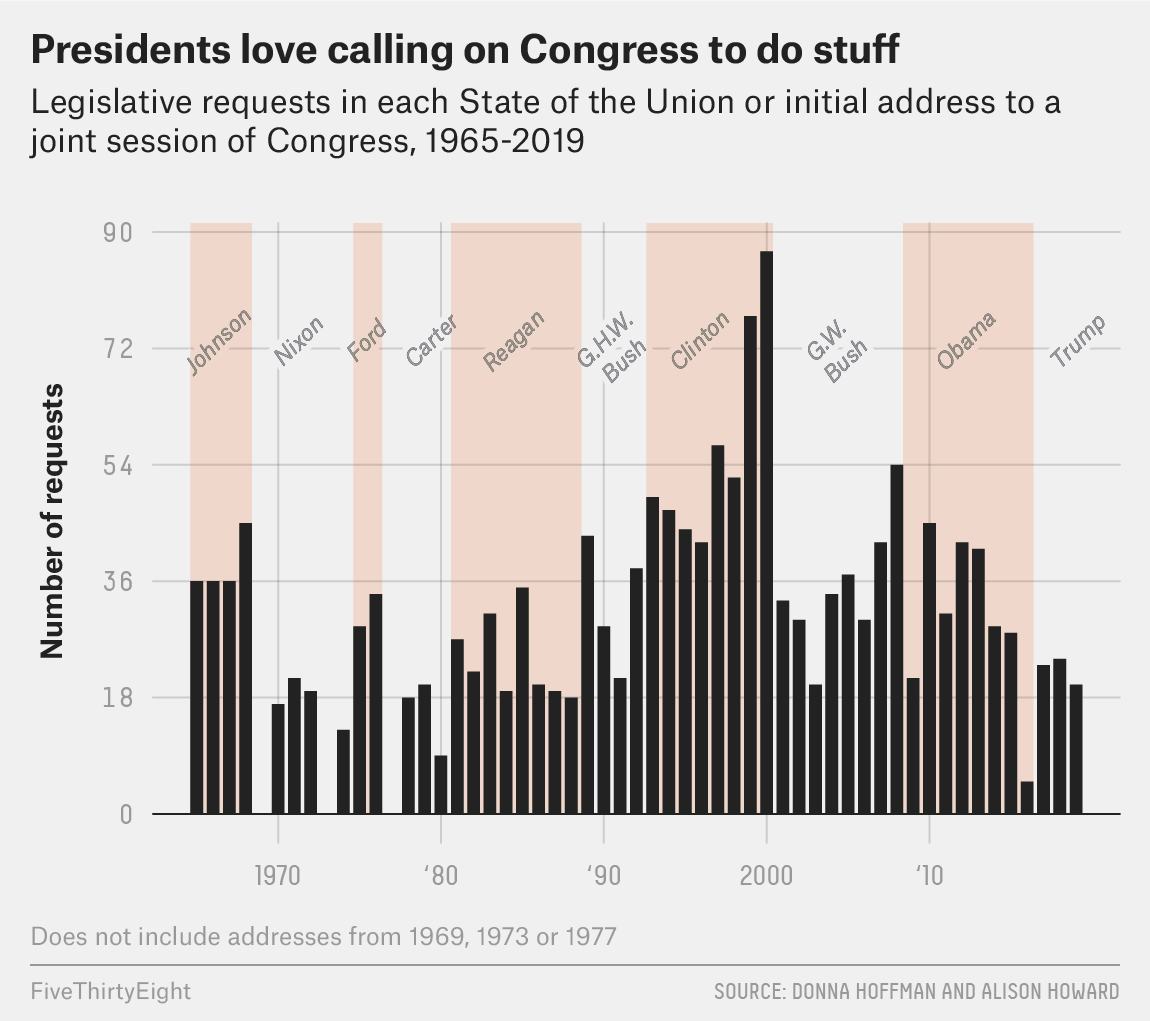 But only 25 percent of those proposals were fully enacted within the following year (another 14 percent, however, were partially enacted). The exact share has varied a lot from year to year: For example, the wildly productive 89th Congress passed two-thirds of the 36 agenda items in President Lyndon B. Johnson’s 1965 address — but a grand total of zero of the 19 proposals from President Ronald Reagan’s 1987 State of the Union fully became law. As for Trump, only 16 percent of his speeches’ policy rollouts so far have been fully enacted. 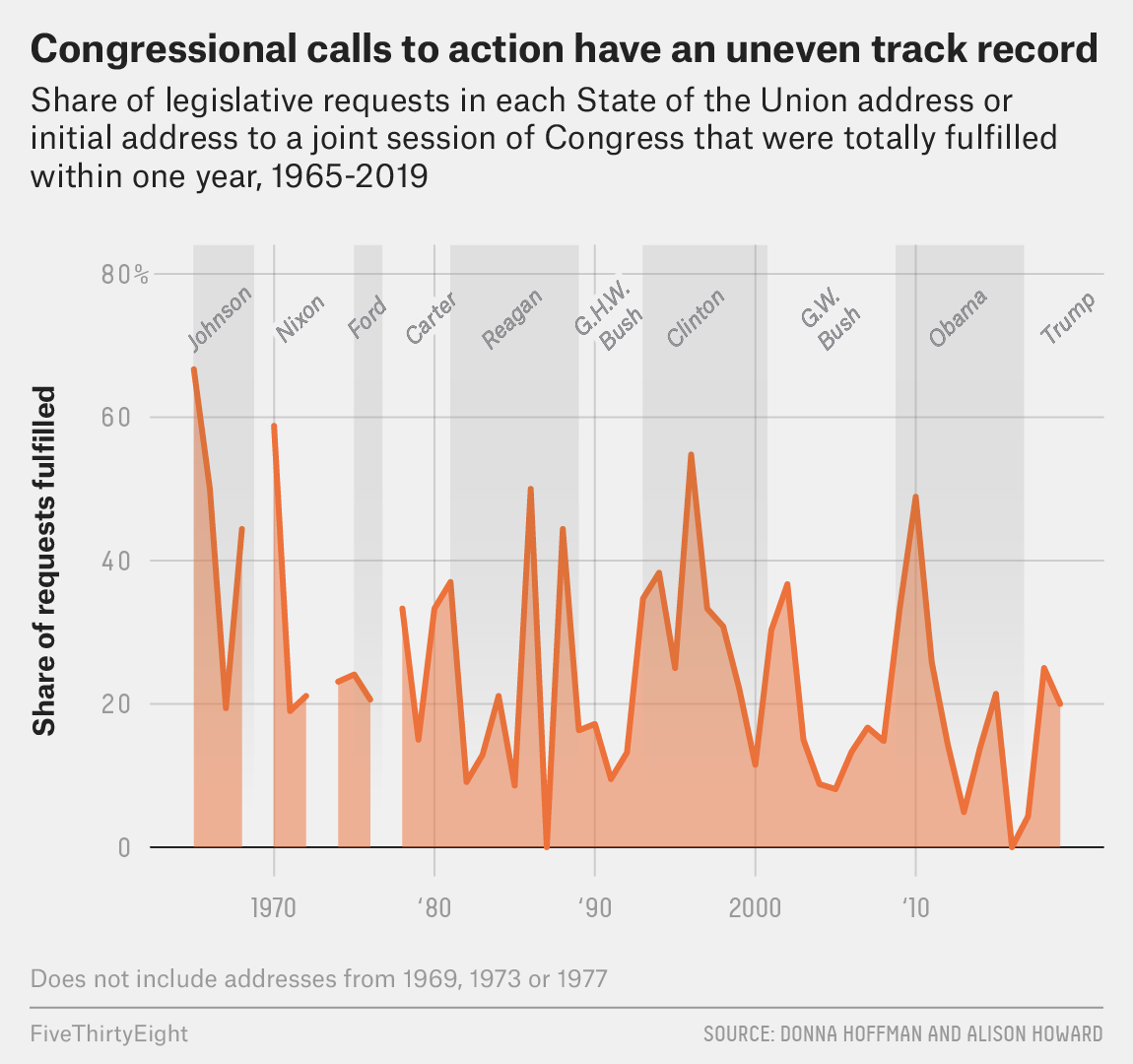 Last year, though, Trump’s approval rating did actually improve by 6 points in the aftermath of his State of the Union — but don’t credit the speech for that. Instead, as you may recall, Trump gave his 2019 State of the Union under rather unusual circumstances — the government had just reopened from the longest government shutdown in U.S. history, which appeared to depress Trump’s approval ratings. Gallup’s pre-State of the Union poll was conducted mostly while the shutdown was still going on. But with the shutdown over, Trump’s popularity reverted to its usual mean of between 41 and 43 percent, and accordingly Gallup’s post-speech poll contained better news for the president. 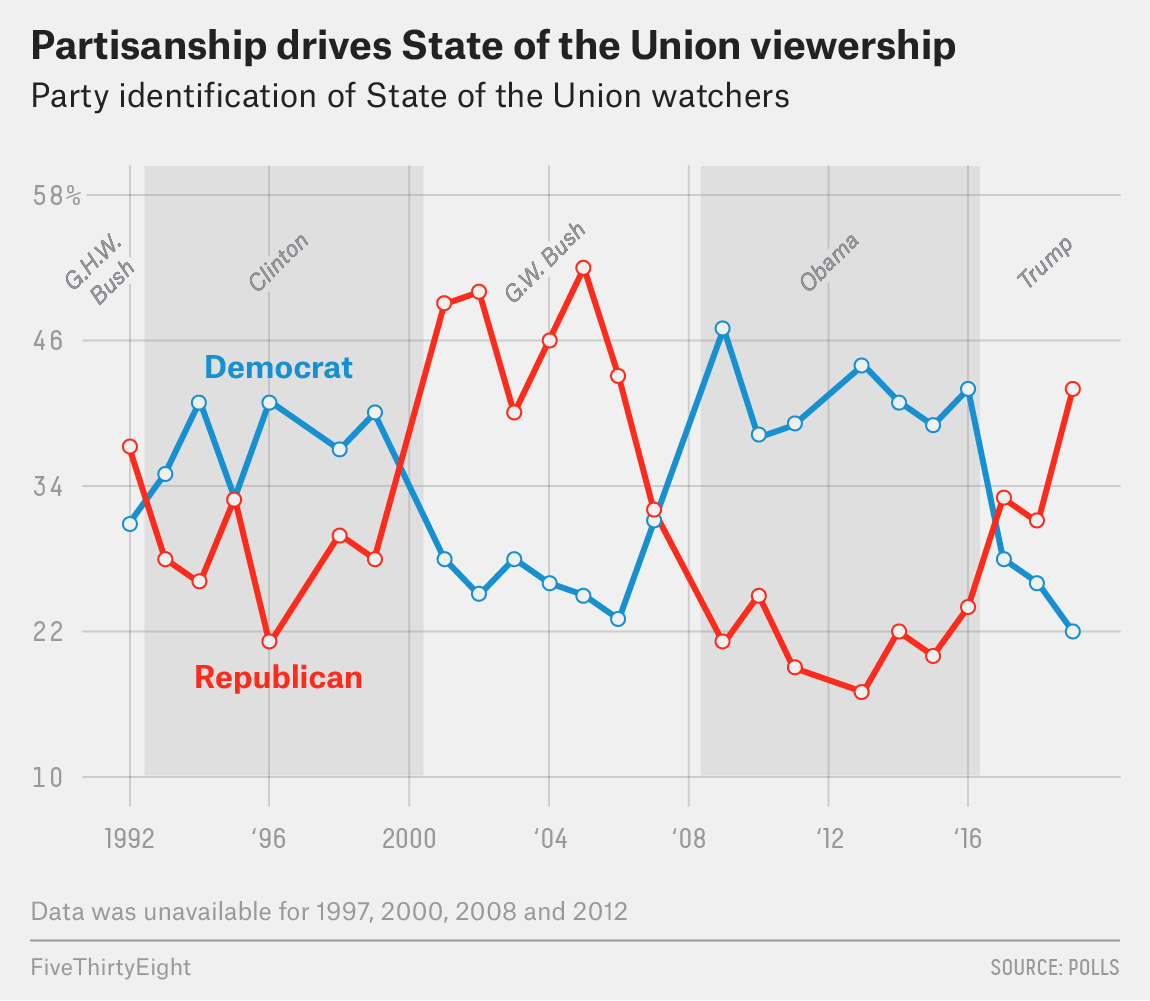 All this isn’t to say that the State of the Union doesn’t matter. It symbolizes how the executive and legislative branches are coequal and must work together to govern. It also allows us to draw a straight line from George Washington — who delivered the first annual presidential address to Congress in 1790 — to modern presidents, a reminder of the continuity of the republic. And since the State of the Union began to be televised in the 1960s, it has represented a chance for the president to speak directly to the people, his ultimate constituents. So tune in on Tuesday night for the chance to participate in an important democratic tradition; just don’t expect much to come of it.