If you’ve ever watched a tennis player dominate with the first serve but saw the second serve obliterated by the returner, you might have wondered: Why don’t more players go for it on their second serve? Wouldn’t they be better off treating their second opportunity to serve like their first one?

The answer almost always is no.

Most servers win a much higher percentage of points on their first serve than their second serve. For example, in his five-set marathon loss to Kei Nishikori as Monday night turned to Tuesday morning at the U.S. Open, Milos Raonic won 87 percent of his first-serve points but just 47 percent of his second-serve points.

During that match, Min Han, a biologist at the University of Colorado, emailed me. “I wonder whether some of the big servers in men’s tennis should serve the fast ‘first’ serve all the time,” Han wrote. “For some of these guys, the difference between the winning percentage on their first serve and that on the second serve seems huge.”

This is just an average. It varies widely by player. Mikhail Youzhny has a relatively weak first serve without landing in the court all that often, so he’d be especially unwise to go for his first serve again given a second opportunity. His second-serve winning percentage would drop by 12.7 percentage points.

By contrast, Ivo Karlovic, who is 6 feet 10, has a relatively weak second serve and usually lands his excellent first serve in, so he’d gain 2 percentage points on his second-serve winning percentage if he went for his first serve twice. That’s a modest gain, and Karlovic is the only player in the Top 50 who’d get a high enough reward to justify the high-risk tactic. (Raonic would be nearly even, but slightly worse off — as he would have been if he’d gone for second-serve bombs against Nishikori, since he missed so often on first serves in that match.)

Even Karlovic couldn’t have anticipated before this season that he would have benefited from the risky strategy. In each of the past two seasons, it would have hurt him slightly. No current Top 50 player who played at least five matches in 2013 would have gained from hitting exclusively first serves, and only Gael Monfils would have in 2012. (Players’ serve percentages are fairly persistent from year to year, and therefore so is the effect of the tactic on a player’s serve success — a correlation coefficient of 0.66 between this year and 2013, and of 0.7 between this year and 2012, for current Top 50 players with at least 25 matches in each season.)

The story is similar in the women’s game. The Women’s Tennis Association (WTA) sent me data this season heading into the U.S. Open. Among 94 players with at least 15 matches, just six would have benefited from going for their first serves on second serve: Victoria Azarenka, Annika Beck, Yvonne Meusburger, Monica Niculescu, Sara Errani and Yaroslava Shvedova.

Errani, the 2012 French Open finalist, doesn’t have a great first serve. It was even singled out in a New York Times article this week as one of the oddest strokes on tour. But she lands it in at an unusually high rate, leading the WTA in each of the past four seasons and ahead among regulars this year. And her second serve is bad enough to be worth replacing with the first serve, though not by much: She’d have gained 0.6 percentage points on her second-serve winning percentage with the riskier tactic. 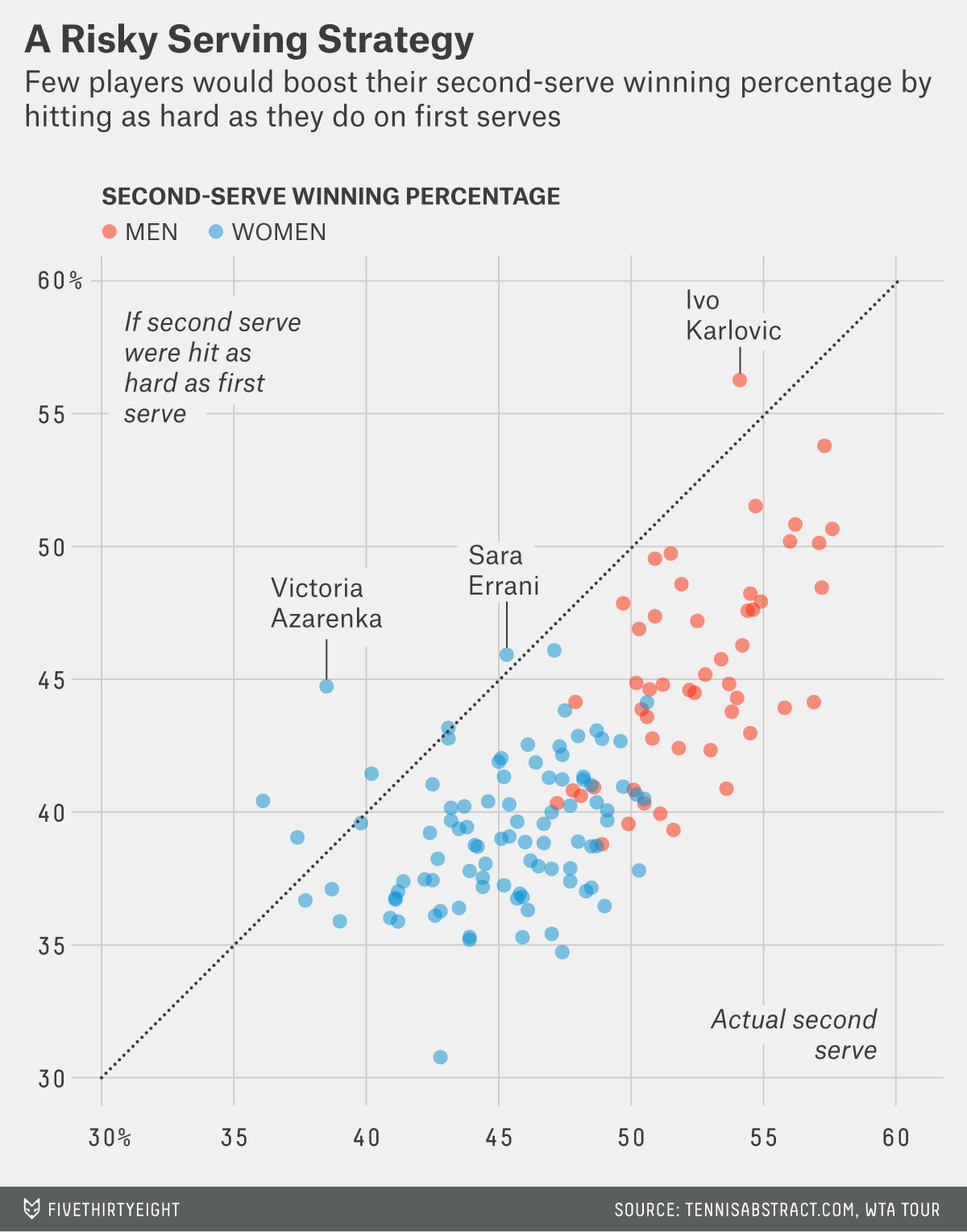 Last year, Azarenka and Errani also would have benefited from the riskier serving approach. Beck and Niculescu would have, too. Meusburger and Shvedova wouldn’t have, though.

Returns on the tactic also could be very volatile from match to match. Though Azarenka’s pre-U.S. Open stats argue for a riskier serving tactic, it would have hurt her in four of her five U.S. Open matches, including her loss to Makarova.

These calculations simplify serving by reducing it to just first and second serves. Most players employ a wide variety of first serves, with different levels of risk and effectiveness. Perhaps a bomb down the T of the court is too risky for a second serve, but a slider out wide lands in the court often enough to be worth it. Then again, go too often to a reliable serve and the returner will adjust and make it less effective.

The calculations also don’t account for the psychological elements of the sport. Returners might get rattled if they know they’ll never face easy serves. But the toll on a server who double-faults much more often could be even greater.