This is a chart comparing an average of all Gallup approval ratings in the 4th Quarter of a President’s term (that is, the fall of his first year) to the 8th Quarter of his term (the fall of his second year, when his party is facing a Congressional election). Presidents in their first full term are indicated with a filled-in circle; lame-duck Presidents have a hollow one. 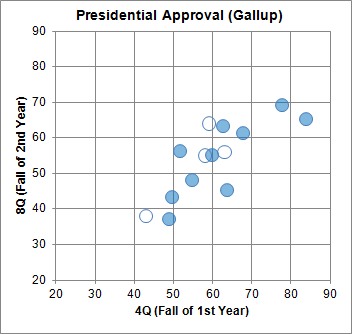 There is a decent amount of variance concealed by this chart — a standard error of about 6 points. It’s also the case that Presidental approval drops a tiny bit on average between the 4th Quarter and the 8th. The way this works out is that by the end of the year, we can expect Obama’s approval rating, which was 51 percent in the 4Q, to be between 42 percent and 54 percent about two-thirds of the time. About one-sixth of the time, it will be lower than 42, and another one-sixth of the time, it will be higher than 54. This is hardly trivial, since for every point change in Presidential approval, a party can expect to lose another 1.4 House seats or so.

Nevertheless, we have a pretty good idea of what Obama’s approval rating is going to look like come the fall: it’s liable to be somewhat lukewarm, just as it is right now.

By comparison, here’s what we get if we take the 4Q approval number and compare it to the 15th Quarter* — the summer of his fourth year, when the President’s own re-election is on the line: 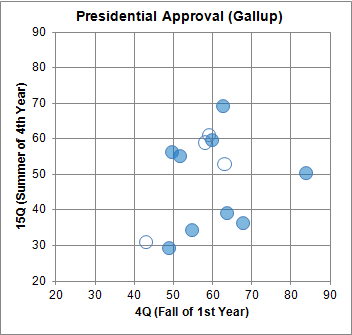 In this case, there’s essentially no relationship, and the standard error is not 6 points but 14. About two-thirds of the time in August, 2012, Obama’s approval rating will be between 32 and 60 points. There is a one-in-six chance that it will be above 60, and a one-in-six chance that it will be below 32. Not very helpful, right? The first year of Obama’s presidency has taught us very little about his fate in 2012 (the same would hold if he had been more — or even less — popular).

You can spin these findings in various ways, but in a statistical sense, it’s hard to make the argument that Obama’s presidency is on the line right now**. An awful lot of things could happen between now and 2012: we could capture or kill Osama bin Laden, or get bogged down in a third front in the war on terror in Pakistan or Yemen; the economy could go into a double-dip recession, or grow at a 5 percent annual clip; a loss of a substantial number of seats at the midterms could bring out the best side of Obama, or his worst. So I don’t use this to recommend (or recommend against) any particular course of policy. What I would say, however, is that if you begin to see a panicked attitude coming from the White House, it’s not really called for — it’s the Congress’s jobs that are on the line right now, and not theirs.

** Let me add a bit more nuance here: I think you can make a good (although probably not rock-solid) case that the idea of a substantially progressive Obama presidency is on the line right now. But there are a lot of scenarios where the combination of voters getting a little something out of their system in 2010, combined with (eventually) an improving economy and perhaps a foreign policy success or two, could leave Obama personally in fairly good shape in 2012.