Public Policy Polling has found a rather dramatic increase in support for health care legislation among liberals. 89 percent of self-described liberals now support the bill — just 3 percent are opposed — a shift which appears to account for most of the somewhat improved numbers that the bill is experiencing overall. But to what should we attribute the change? 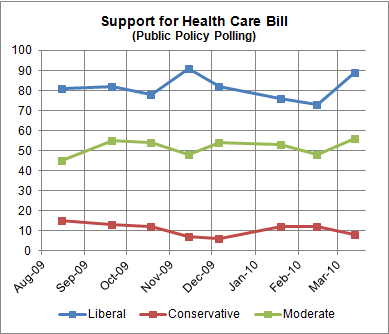 Actually, it’s pretty hard to say. You can point toward the implicit or explicit endorsements made by various liberal thought leaders — Markos Moluitsas, MoveOn.org (which surveyed its members and found 83 percent in support of the bill), the unions, Michael Moore, etc. But that’s more a symptom than a cause. I can assure you, contra Glenn Beck’s darkest fantasies, that there is no Secret Liberal Cabal at which Andy Stern is doing tequila shots off Michael Moore’s jiggling belly while Markos and Dennis Kucinich eat vegan hors d’oeuvres and share notes on messaging strategy. (Or if there is, I haven’t been invited.) This appears, rather, to have occurred somewhat spontaneously. And it has occurred in spite of the fact that the bill hasn’t really gotten any more liberal. Whatever might come out of the reconciliation process will be marginally more liberal than what the Senate passed on its own, but still lacks a public option or a Medicare buy-in, and suffers from most of the same flaws that some liberals were critiquing in the first place. It might have helped a little bit to get the Senate bill off the front pages — but the differences between the “Obama”/reconciliation bill and the Senate’s December bill are fairly cosmetic.

Perhaps the loss in Massachusetts served to galvanize liberals and unite them around the bill? That’s an important precondition of the story, surely — but if it were the sole cause, we’d have expected the increase in support to have come between January and February — not, as PPP found, between February and today.

Personally, I think the reason for the increase in support is mostly this: the Democratic leadership, and particularly President Obama, are now fighting for this bill tooth and nail. They didn’t necessarily have to do this; they could have thrown in the towel, passed off some bipartisan crap that didn’t do much to help the uninsured, and called it a day. That’s what Rahm Emanuel wanted to do, as Chris Bowers points out. But that isn’t what Obama did: instead, he’s gone all-in on the thing, potentially staking his Presidency on the outcome. Liberals like the idea of being the scrappy underdog — being the fighter — and Obama, after a strangely aloof performance on the health care bill throughout 2009, has been fighting the good fight.

Nor is it a fight that Democrats are necessarily bound to win: the odds are probably not much better than 50:50. Before Scott Brown’s victory, I think a lot of people assumed — wrongly — that a health care bill was inevitable, and that it wasn’t a question of whether a bill would pass but which one would pass. Many of the liberal criticisms of the bill are valid — but the argument that the bill was worse than the status quo (in terms of accomplishing any of the objectives that liberals normally care about) was never persuasive. Now that it’s been made clear that the status quo really is the alternative, indeed, we see just how unpersuasive that argument was: if PPP’s numbers are correct, then only about 3 percent of liberals still buy it.

I disagree with Ben Smith, by the way, about his contention that this would “seem to vindicate the White House’s fundamental approach … to take the left for granted as much as possible and focus on courting marginal members of the Senate.” Of course, messaging always needs to be slanted toward the median voter: there are a lot more people in the middle of the political spectrum than at the tail ends of the Bell curve. But, even that small percentage of liberals who had doubts about the bill — maybe a quarter of liberals, meaning about 4 percent of the electorate overall — can move the numbers at the margins. A Congressman is going to have a much easier time swallowing a bill that’s polling at 43-47 — too close to call, he might tell himself — than one that was at 39-51. (Nor is he likely to check to see where the opposition is coming from, even it’s been clear enough for some time that some of the opposition was from the left.) The lukewarm reaction among many liberals to the bill may therefore have contributed to the delays in enacting the legislation — which in turn meant that it was still a couple yards short of the goal line at the time of Brown’s surprising win in Massachusetts. The lesson for the White House, I think, is that liberals (like any other voters) react as much to tone as to substance. A bill might not meet every objective on the liberal checklist, but so long as you’re Fighting Like Hell for it, liberals are usually going to be willing to fight for you too.