We won’t be able to fully assess the quality of this year’s NFL draft class until all the players retire. But we can be pretty sure their success will depend on more than innate ability. One important factor will be something they have little control over: The more success produced by a draft’s immediate predecessor and successor, the less value that draft is likely to produce.

It’s a surprising finding. Normally we’d expect talent to be roughly equally distributed each draft, with some fluctuations. The draft process isn’t entirely random: College players can leave school early. But that should smooth any fluctuations, because the draft is, after all, an efficient market, so rational players should time their exit for when they’ll have the least competition from their peers.

And yet, total value from a single draft depends on the year before and the year after. 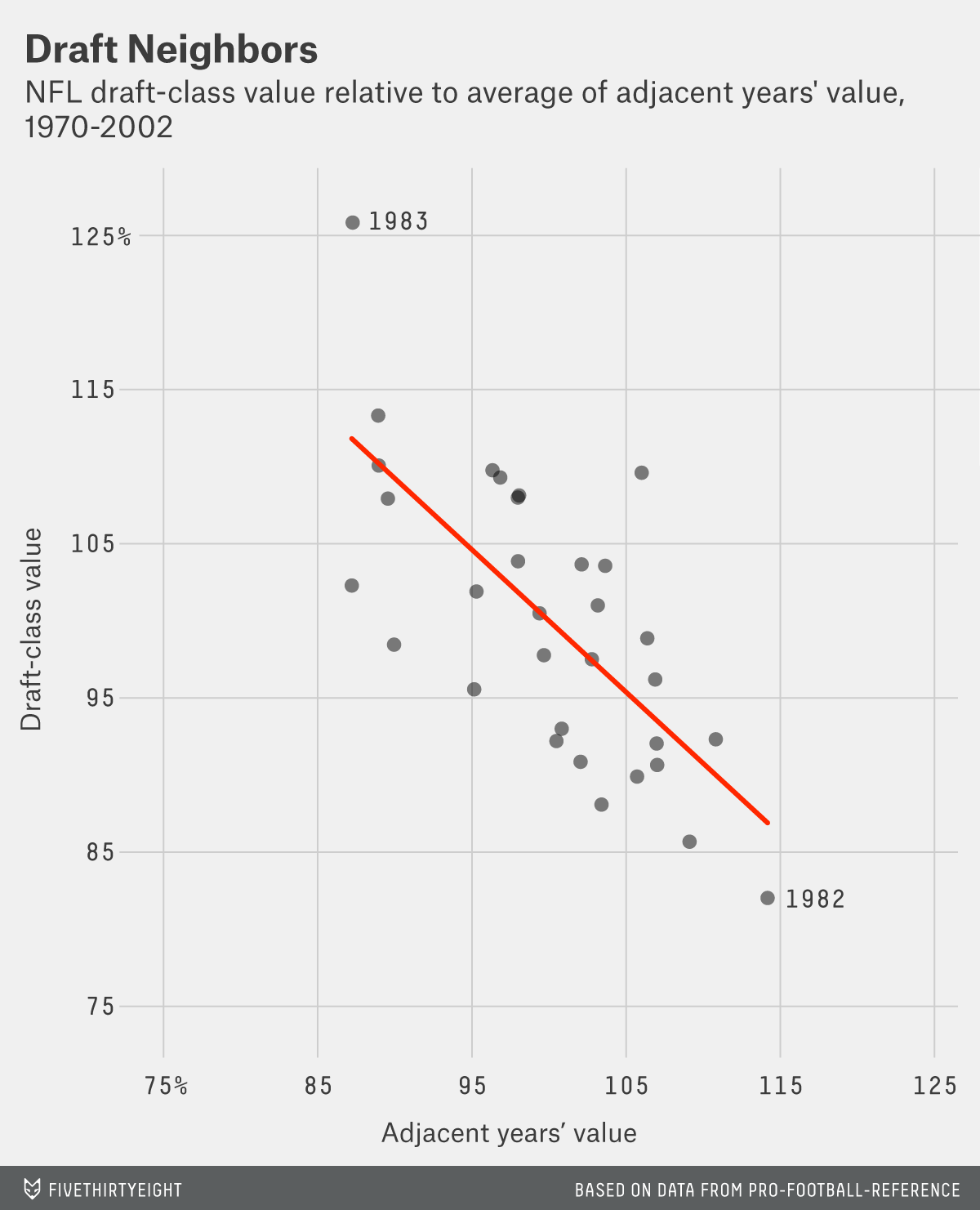 Two explanations strike me as most plausible.

The first is that the total talent entering the draft each year does oscillate. That could happen because a particularly strong college class will get a disproportionate share of playing time and coaching, leaving surrounding classes weaker.

The second possible explanation is that NFL teams can only play 11 men at a time; being surrounded by other young athletes getting a lot of playing time makes it harder for rookies to get on the field. That suggests that the underperforming draft class’s sin isn’t being less talented, but having bad timing, and therefore less opportunity.

I think one of these two explanations is more likely than the other. But before I explain why, here’s what I did:

I downloaded the data for every draft from 1970 — the year the AFL and NFL merged — to 2013 from Pro-Football-Reference. For each drafted player, each year, the website lists his career contribution to team success. Its unit of measure is the player’s approximate value (AV), an all-encompassing estimate of a player’s usefulness, for all positions. For its draft pages, PFR doesn’t use a simple sum of AV, but instead an alternative measure that takes into account a player’s overall career contribution and his peak value. (100 percent of his best single-season AV, plus 95 percent of his second-best season total, and so on.)

To compare adjacent draft classes’ total AV, I had to account for the varying number of draft picks in a given season: as low as 222 in 1994, as many as 487 in 1976. For each pair of adjacent drafts, I chose the lower of the pair’s number of picks, n, and summed the AV of the players selected in the first n picks, for each draft. I then restricted the analysis to the period 1970 to 2002, because many of the players for subsequent seasons remain active, which could affect the year-to-year correlations. Then I checked the correlation of one draft class’s total value to the total value of the preceding and subsequent drafts. Each correlation was -0.54. The negative sign means the higher one class’s value, the lower the preceding year’s and following year’s. And the correlation was even more strongly negative between the value of one year and the average of the value for the year before and after: -0.7.

I then performed similar checks of offensive stats to see whether they hinted at the reason for the negative correlation. I wanted to check whether the effect was due to opportunity or performance. Counting stats represent opportunity: If players are getting on the field more, they’ll put up better numbers and higher AV totals, on average. Rate stats represent quality of performance: The more a player does with his opportunities, the better his rate stats and higher his AV totals.

What I found is that opportunity was the chief driver of the results. Counting stats exhibited the same sort of negative correlation from year to year, especially for quarterbacks: For completions, attempts, yards and touchdowns, the higher the numbers the classes before and after compiled in their career, the lower the numbers that year’s class racked up, with a correlation for each of about -0.4. Yet for rate stats, the opposite effect held: The higher completion percentage and passer rating were for neighboring years, the higher it was for that year’s draft class, with a correlation for each of about 0.5. Quarterbacks surrounded by draft classes with lots of QBs who got a lot of playing time got to play less, but when they did, they were better. That suggested they had to do better to even get the chance to play.

Opportunity matters in sports, as in other walks of life. General managers are inclined to give top draft picks playing time in the hope they’ll justify the pick. The careers of Ryan Leaf and JaMarcus Russell demonstrate this phenomenon on a micro level. The macro-level data tells the same story.