Read the financial press Tuesday morning, and odds are you’ll see a headline saying that retail sales were “disappointing” in June or that they “missed expectations.” Ignore all that: Tuesday’s report was the best evidence yet that the first quarter’s troubling economic slowdown was a one-off fluke.

Retail and food-service sales (that’s everything Americans buy at stores, in restaurants or online) rose 0.2 percent in June, the Commerce Department said. That’s well below the 0.6 percent Wall Street economists had expected. Set aside sales of cars and car parts, which tend to be volatile, and sales were up a healthier 0.4 percent — a bit below economists’ expectations of 0.5 percent growth.

But the real news in the report wasn’t the numbers for June, which are based on incomplete data and will be revised in the months ahead. More important were upward revisions to April’s and May’s figures. After the revisions, it looks like retail sales rose 0.6 percent in April and 0.5 percent in May. (These figures are adjusted for seasonal patterns but not for inflation.) 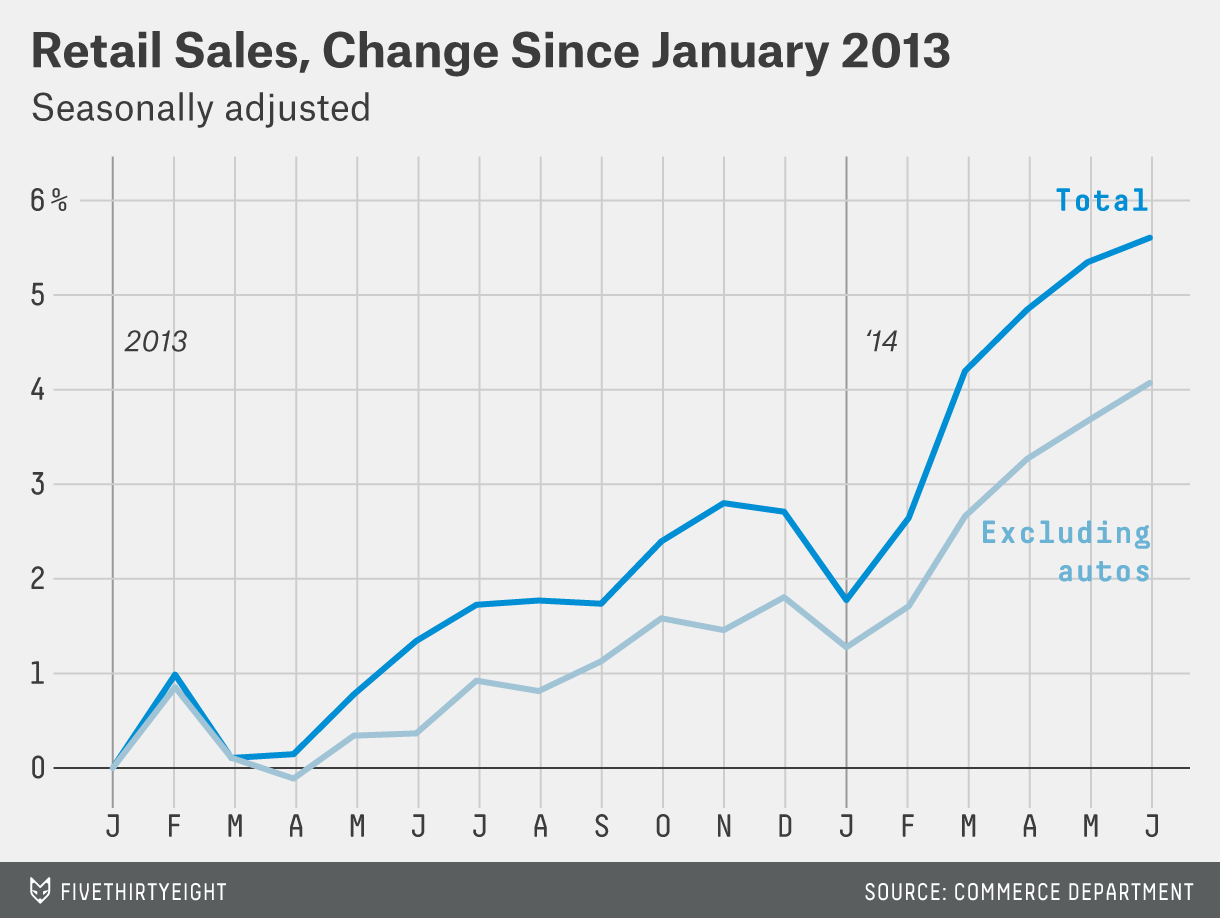 What matters here isn’t the month-to-month moves, but the bigger picture. The economy hit a major roadblock in the first three months of the year; gross domestic product, the broadest measure of goods and services produced in the economy, shrank at a 2.9 percent rate. Since then, economists have been trying to figure out whether the slowdown was a blip (perhaps due to the brutal winter) or a reflection of a deeper problem. Tuesday’s figures point strongly toward blip.

The chart above shows retail sales over the past year and a half. Sales dropped steeply in January but quickly rebounded, and appear to be holding to their prior trend line. That’s good news for the broader economy because consumer spending accounts for more than two-thirds of GDP. (One caveat though: “Consumer spending” includes a lot more than retail sales, including health care and other things that many people don’t pay for out of pocket.) Following the retail report and other recent data, most economists expect second-quarter GDP growth to come in around 3 percent, a substantial rebound from the first-quarter contraction.

Still, it’s important to put that good news in context. At the start of the year, economists were hoping this would be the year the economy broke out of the slow-growth pattern it’s been stuck in since the recession ended. Now it looks all but certain that the economy will grow more slowly this year than last: GDP would need to grow at a 4.5 percent rate for the rest of 2014 just to equal last year’s growth rate. Tuesday’s report suggests that the first-quarter stall was an aberration, but it offers little hint of an acceleration.