UPDATE (September 23, 2020, 4:53 p.m.): On Wednesday, a grand jury decided not to charge any Louisville police officers with killing Breonna Taylor earlier this year. One former police officer was indicted for recklessly endangering Taylor’s neighbors, but the other two officers were not charged.

As we wrote earlier this summer, it’s actually quite rare for police officers to face criminal legal consequences for using excessive force — or even fatal violence — against civilians.

On Friday, former Minneapolis police officer Derek Chauvin was arrested and charged with third-degree murder and second-degree manslaughter after he was caught on video pressing his knee on George Floyd’s neck for nearly nine minutes, even though Floyd told him repeatedly he couldn’t breathe. And now Minnesota Attorney General Keith Ellison is adding a second-degree murder charge, in addition to charging the three officers who were on the scene when Floyd was killed.

The fact that Chauvin was charged at all was significant. The elevation of the charges — and the fact that the other three officers are also being charged — is even more so. That’s because it’s still quite rare for police officers to be prosecuted. A review of the data we have on police prosecutions shows that it’s uncommon for police officers to face any kind of legal consequences — let alone be convicted — for committing fatal violence against civilians.

The data we have on police misconduct is, admittedly, far from perfect. There is no national system for reporting police misconduct, and state agencies are often reluctant to release any details about investigations into police wrongdoing.

What’s more, there’s no evidence that substantially more police officers are facing charges, despite an uptick in protests against the use of excessive force by police. Many major cities continue to pay out millions of dollars each year to settle lawsuits against police officers, too, often without firing officers who have been repeatedly sued. So even though police misconduct has drawn greater national attention, it’s still really difficult to hold police officers legally accountable for any kind of misconduct — including fatal violence.

Over the past few years, there have been a number of high-profile trials of police officers, but it’s often hard to know whether more police are being prosecuted, or if the issue is just receiving more attention. Stinson’s Henry A. Wallace Police Crime Database is among the best sources available on prosecutions of police; it logs 10,287 criminal arrest cases between 2005 and 2014 involving 8,495 non-federal sworn law enforcement officers.

Updating this data is difficult and time-consuming, but Stinson was able to send us more recent data for prosecutions resulting from on-duty police shootings, since those are rarer and easier to track. That doesn’t include police killings that aren’t shootings, but Stinson told us that prosecutions for deaths like Floyd’s are especially rare. In fact, Stinson has found only 110 law enforcement officers nationwide1 have been charged with murder or manslaughter in an on-duty shooting — despite the fact that around around 1,000 people are fatally shot by police annually, according to a database maintained by The Washington Post. Furthermore, only 42 officers were convicted. Fifty were not and 18 cases are still pending. And as the table below shows, many of these convictions ended up being for a lesser offense — only five of these officers were convicted of murder (and did not have that conviction overturned). 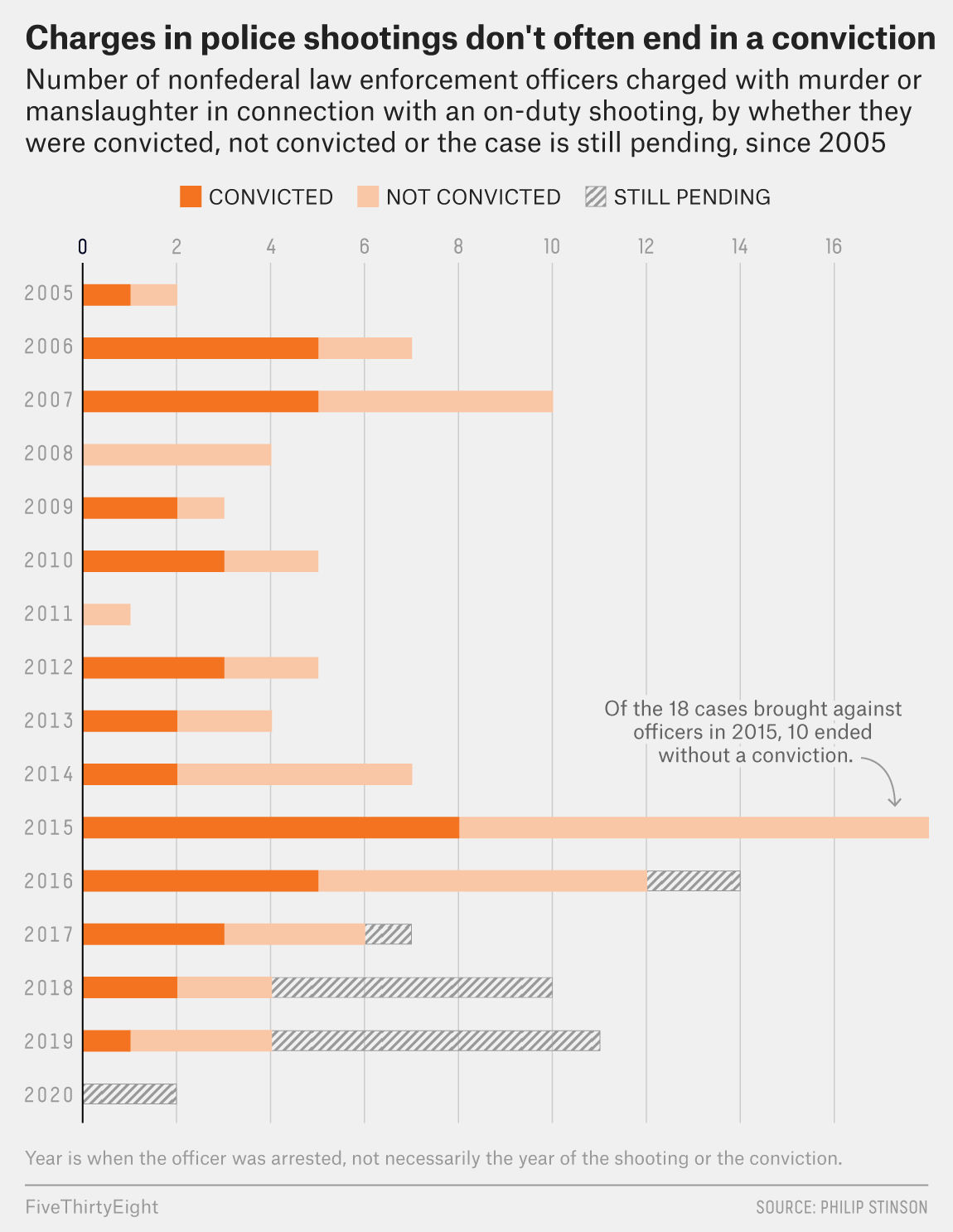 Why are police prosecutions still so rare? In the last few years, many cities have pledged to reform their police departments, and progressive prosecutors have even won on promises to hold police accountable for misconduct. But Kate Levine, a professor of law at the Benjamin N. Cardozo School of Law who studies police prosecutions, told us that not all misconduct — including use of excessive or even fatal force — is illegal. “If a civilian is displaying a weapon, it’s very hard to charge [the police officer] with murder for taking action against that civilian,” she said. “And even if a civilian doesn’t have a weapon, it’s hard to charge a police officer if [the officer] can credibly say they feared for their life.”

There are other barriers to charging and convicting police, too. Prosecutors work closely with police departments, which means they may be reluctant to jeopardize that relationship by pursuing cases against officers. Police officers’ contracts also often protect them from interrogation techniques that are often used on civilians, according to Levine. And in the cases that make it to trial, judges and juries may be more inclined to believe law enforcement officers when they say their lives were threatened. All of these challenges are so baked into the system that it’s very difficult to make meaningful changes. Altering prosecutors’ relationship with police isn’t a simple or easy reform, for instance — it would be a fundamental shift in the way our criminal justice system works.

Of course, prosecution isn’t the only legal route for holding police officers accountable for misconduct. People can also sue if their constitutional rights are violated by police, which includes offenses like use of excessive force. There’s no national data source for this either, but we looked at data on police misconduct settlements in New York, Los Angeles, Chicago and Philadelphia. And New York has paid more than $100 million on police misconduct settlements each fiscal year between 2015 and 2018, per data from the New York City Comptroller’s Office. In total, New York Police Department misconduct settlements cost the city $630 million between the fiscal years of 2011 and 2017. In Los Angeles, they totaled more than $139 million in that same time period, according to data compiled by the Los Angeles Times. And in Chicago, police misconduct settlements between the calendar years of 2011 to 2018 totaled $398 million, according to data compiled by The Chicago Reporter. In Philadelphia, that number is nearly $90 million, per data from the city’s Law Department.

This might seem like a lot of money, but experts say it’s not an especially effective way of promoting police accountability. For one thing, according to research by Joanna Schwartz, a law professor at the University of California, Los Angeles, police almost never pay the settlements out of pocket — instead, the money comes from cities or police departments, and often in ways that don’t put financial strain on police departments. That may help explain why some of the nation’s largest cities have a history of keeping officers on the force even when their conduct has resulted in many lawsuits — the legal actions may not actually prompt police departments to internally discipline or fire officers who are sued over and over again.

Part of the problem, according to Schwartz and others, is that it’s also very difficult to successfully sue a police officer for misconduct because the courts have granted them broad protections from legal liability for actions they take on the job. This doctrine, called “qualified immunity,” protects government officials from being sued if there isn’t a violation of clearly established law — which means, in practical terms, that a case against a police officer will often be dismissed if the alleged behavior hasn’t previously been found unconstitutional.

This has resulted in a bizarre and circular trap for people trying to sue police for misconduct: To succeed, they need to find previous cases where similar misconduct occurred, but there are very few other precedents because other plaintiffs hit the same stumbling block. “This is a big part of the reason victims of police misconduct are very rarely compensated and there is no predictable accountability for law enforcement officers who step out of line,” said Jay Schweikert, a policy analyst with the libertarian Cato Institute. His organization is one of many across the ideological spectrum that are currently urging the Supreme Court to reconsider the protections afforded to law enforcement professionals by this doctrine.

Nearly all of the experts we spoke with stressed that the legal system isn’t the only way — or even the best way — to prevent police misconduct. Seth Stoughton, a former police officer who’s now a law professor at the University of South Carolina, said he thinks police prosecutions shouldn’t overshadow other solutions that might also help change police culture. This includes being more proactive about yanking police licenses or more transparent about misconduct data, so the scope of the problem is clearer. “Legal accountability is just one type of accountability,” he told us. “It’s certainly very important — but it’s not the silver bullet I think a lot of people expect it to be.”