The official version of FiveThirtyEight’s polling-based forecasts project Rick Santorum to receive about 19 percent of the vote in the Iowa caucuses on Tuesday night. It translates this to an 18 percent chance of Mr. Santorum’s overcoming his slight deficit with Mitt Romney and Ron Paul and winning the caucuses outright.

Our model is more optimistic about Mr. Santorum than those of other objective forecasting systems, which give him about 16 percent of the vote. The reason is that our model gives extra credit to Mr. Santorum for his momentum in the closing days of the campaign. But there is some reason to think that it is still giving Mr. Santorum too little credit.

The momentum factor in our model is derived from an analysis of competitive primaries and caucuses throughout the country since 1980. It does not contain any Iowa-specific variables, although it does recognize that polling in Iowa and other early-voting states tends to be more erratic than polling in later-voting states.

There is reason to think, however, that momentum might be especially important in Iowa. There are three good arguments for why this might the case:

I decided to investigate this hypothesis by looking at the predictions our model would have produced immediately in advance of past Iowa caucuses. Did candidates with strong momentum heading into caucus night tend to overperform their forecasts?

The answer is yes, although only a few past candidates have had momentum comparable to Mr. Santorum’s. The three who had shown the clearest upward trajectory in their polls in advance of caucus night were Pat Buchanan, a Republican, in 1996, and two Democrats, John Kerry and John Edwards, in 2004.

All three massively overperformed their forecasts, beating them by an average of 9 points. Remember, our model was already giving these candidates some credit for their favorable momentum. It just wasn’t giving them enough credit. 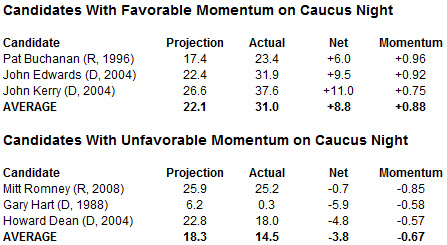 Conversely, the three candidates with the most clearly negative momentum — Howard Dean in 2004, Gary Hart in 1988 and Mitt Romney in 2008 — all underperformed their forecasts, although it was by a trivial amount in Mr. Romney’s case.

What if, instead of having a one-size-fits-all model, we instead had calibrated the model based solely on data from immediately in advance of past Iowa caucuses? Regression analysis on these cases would imply that we needed to give the momentum factor several times more weight than is assigned by default.

This Iowa-specific version of the model, in fact, would project Mr. Santorum to win the caucuses with 23.5 percent of the vote. It would also have Mitt Romney slipping from first place to third.

The downside to using this Iowa-specific version of the model is that it derives from a much smaller sample of cases, potentially making it less robust when applied to new data. The “enhanced” model scores highly according to tests of statistical significance, but it is still ultimately based on a mere handful of examples, like Mr. Buchanan and Mr. Kerry.

In this case, however, there are good theoretical reasons to believe that momentum is especially important in Iowa, like those that I articulated above. Having strong theoretical rationales for the results you are seeing from a model is crucial when you have relatively few data points to help you separate the signal from the noise.

This alone might not quite be enough to convince me that Mr. Santorum is the favorite Tuesday night. But we previously discovered a completely separate Iowa-specific dynamic that also favors him: conservative candidates like Mr. Santorum have tended to overperform their polls in past Republican caucuses.

Mr. Santorum is already so close to Mr. Romney and Mr. Paul that if either hypothesis proves to be true once again — momentum is especially important in Iowa or conservatives tend to beat their polls — one could project a victory for him. If both hypotheses hold up, he could win with a possible 27 or 30 percent of the vote.

Our default model is designed to provide for a reasonable benchmark. But it is also designed to be simple rather than necessarily accounting for all the salient evidence. I find this particular evidence credible enough that I’m willing to do something I’d ordinarily avoid: bet against my own model, and call Mr. Santorum the favorite. Not a heavy favorite, to be sure — I’m not sure that I’d place a bet on any of the three candidates at even odds — but I like his chances a little better than those of Mr. Romney and Mr. Paul.